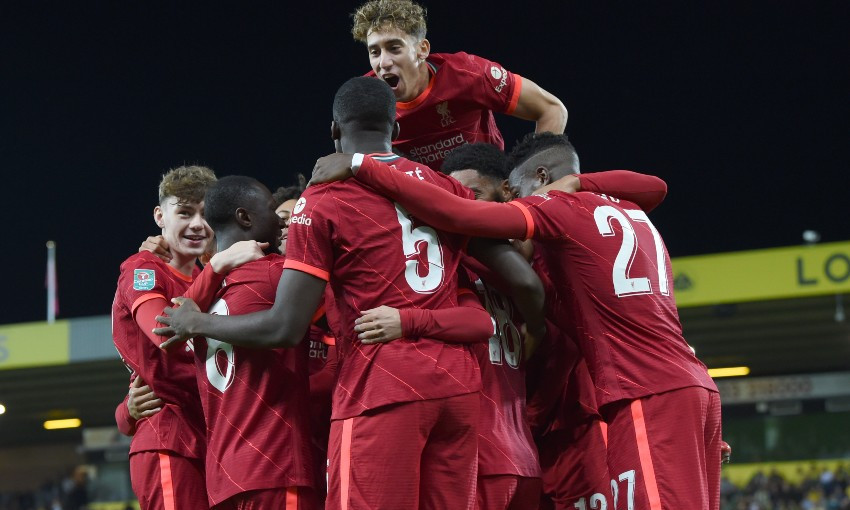 Liverpool advanced to round four of the Carabao Cup by beating Norwich City 3-0 at Carrow Road.

Takumi Minamino’s fourth-minute finish set the Reds on their way to victory in Tuesday night’s third-round tie, and Caoimhin Kelleher ensured their lead was intact at half-time by saving a Christos Tzolis penalty.

Divock Origi’s fine header five minutes after the restart compounded matters for Norwich, before Minamino got his second of the evening late on to seal Jürgen Klopp’s side’s spot in Wednesday’s draw for the next stage. 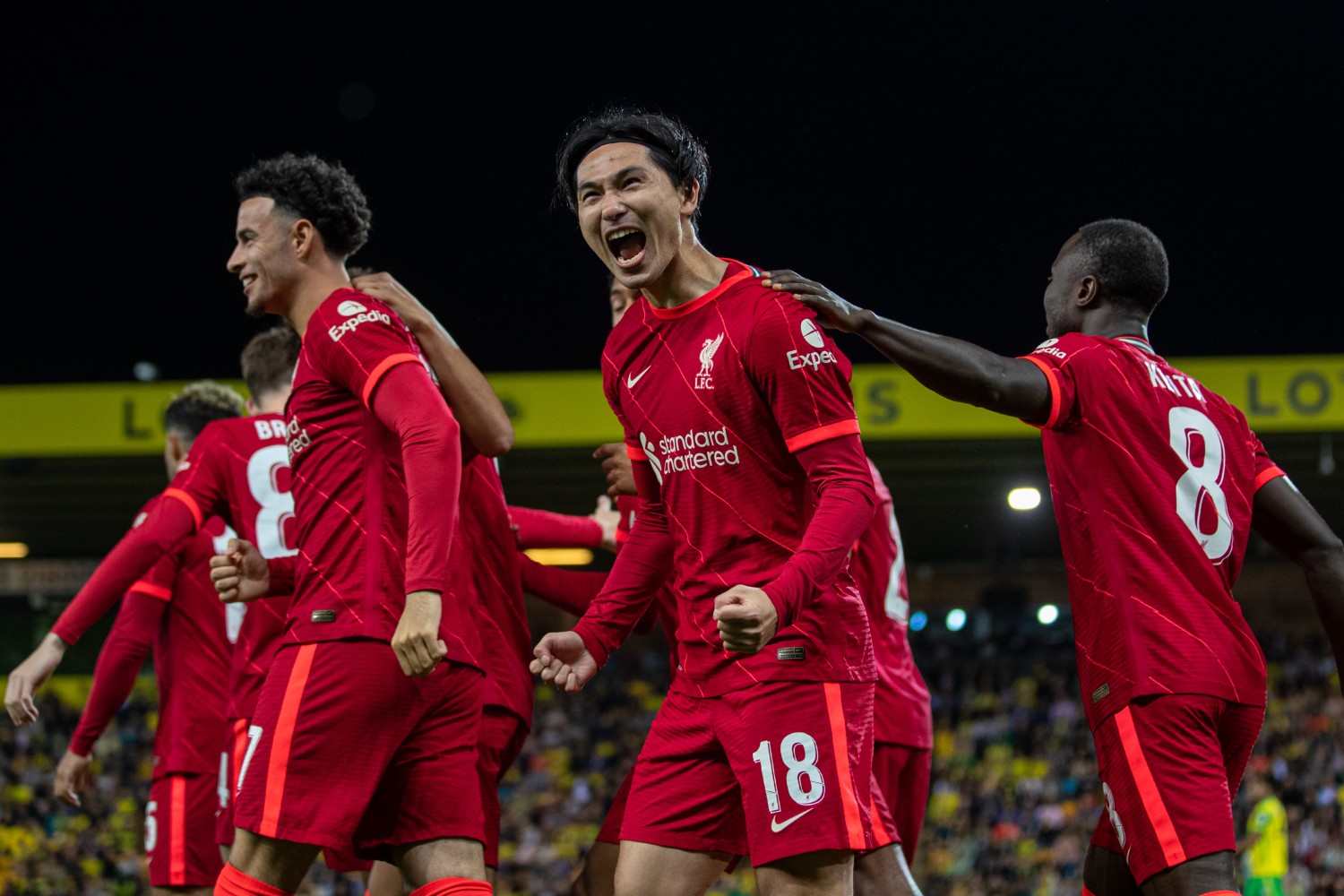 Teenagers Kaide Gordon and Conor Bradley made their senior debuts as Klopp rotated heavily, with 16-year-old Gordon becoming the fifth-youngest player in the club’s history.

Two more Academy players - Tyler Morton, who came on for Naby Keita at half-time, and James Balagizi - were named on the bench.

Ibrahima Konate and Kostas Tsimikas were the only members of the starting XI from the weekend win over Crystal Palace to retain their places, while Joe Gomez captained Liverpool for the first time.

It took little time for Liverpool’s bright start to yield the opening goal.

Tsimikas’ out-swinging corner was nodded down by Origi and Minamino swivelled sharply before dispatching a close-range finish through the legs of Norwich goalkeeper Angus Gunn.

Further set-piece excellence from Tsimikas created an opportunity for a second soon after, the left-back this time finding Konate with a corner. The No.5 met the delivery with a powerful header, but it cleared Gunn’s crossbar.

All the attacking running was being made by the visitors and Gordon was next to go close, the youngster drifting in off the right flank and skidding a low shot into the side-netting from 20 yards.

Norwich’s first foray forward of note saw Kelleher called into action with around half an hour gone, the ‘keeper comfortably saving Adam Idah’s attempt following a neat back-heel by Tzolis.

Kelleher’s involvement for the half wasn’t over yet, either, as the No.62 repelled Tzolis’ penalty with his legs when the Greek tried to place his spot-kick down the middle after Bradley had bundled Dimitris Giannoulis over in the area.

Pierre Lees-Melou blazed a presentable chance over the bar in the early moments of the second half and Norwich were quickly made to pay.

A free-flowing team move saw the ball shifted from Liverpool’s right to left, with Curtis Jones accelerating things by slipping a pass into the path of the overlapping Tsimikas.

The left-back’s cross, this time from the byline, was again precise, and Origi met it with a glancing header that found the far corner. 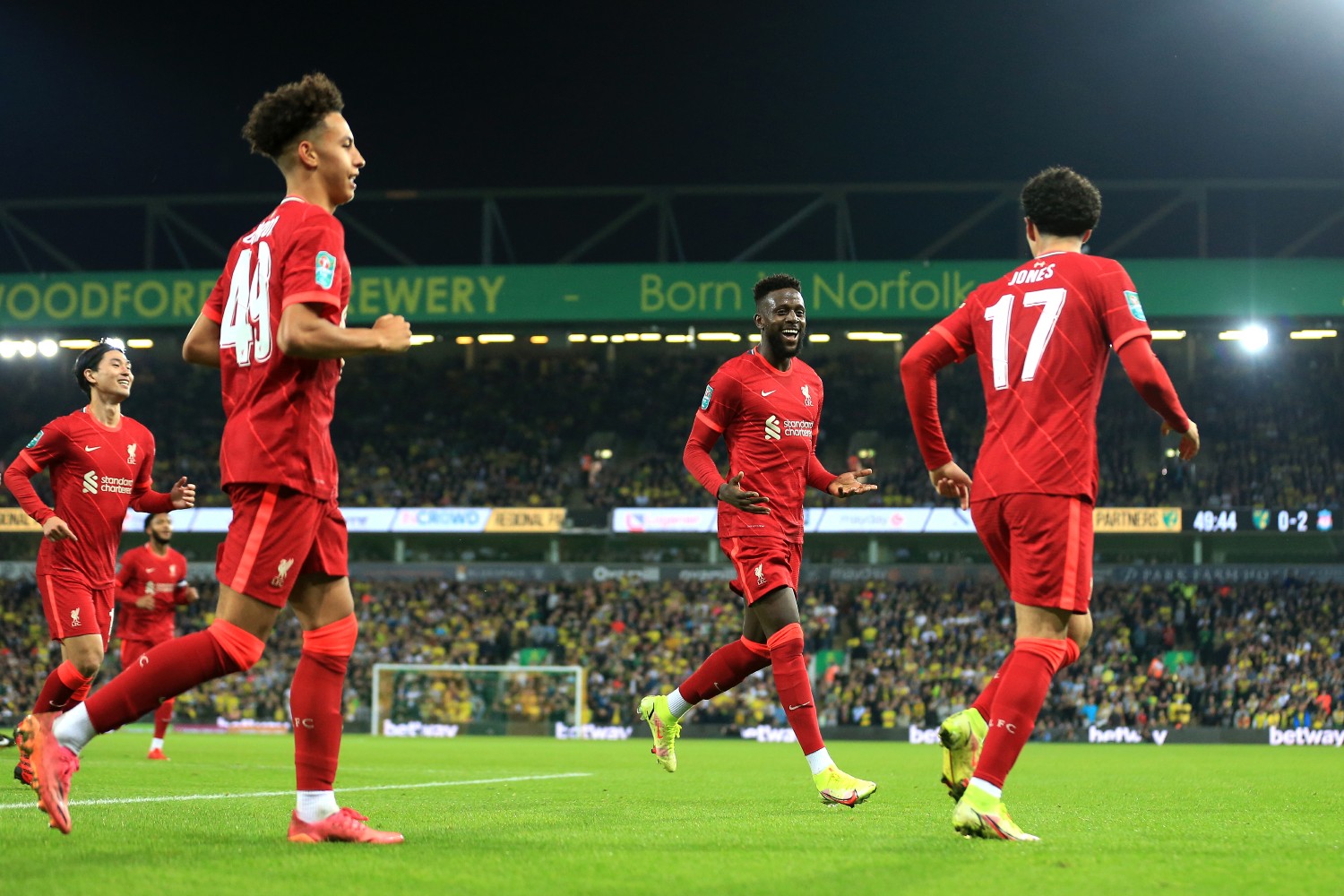 Origi very nearly made it three a couple of minutes later, the striker latching onto Gordon’s pass and curling an effort narrowly wide.

But the Reds would get the third goal their dominance merited with 10 minutes remaining.

Bradley did well to nick possession high up the field and Alex Oxlade-Chamberlain then fed Minamino, who squeezed a shot beneath Gunn at the ‘keeper’s near post.