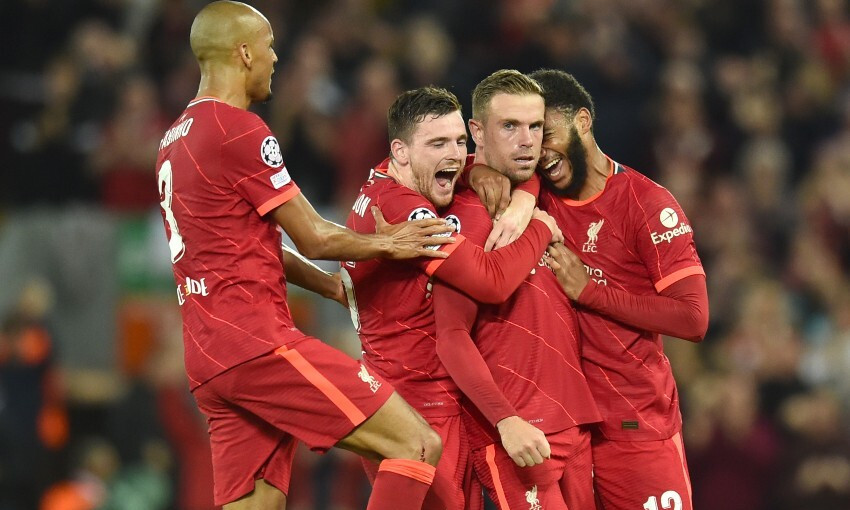 Champions League football returned to a full-capacity Anfield with a pulsating 3-2 victory for Liverpool over AC Milan on Wednesday night.

Trent Alexander-Arnold put the Reds in front inside 10 minutes of the Group B encounter when his run and close-range shot found the net via a deflection off Fikayo Tomori.

Mohamed Salah then had a penalty saved by Mike Maignan before Milan struck twice in two final first-half minutes to go in front through Ante Rebic and Brahim Diaz’s quick-fire efforts.

However, Salah equalised four minutes after the restart when he prodded in from a sublime Divock Origi pass and Jordan Henderson’s perfectly executed first-time volley from the edge of the area restored their lead.

It proved the decisive act on an eventful night at Anfield as Liverpool got their Champions League campaign up and running with three points on matchday one.

Liverpool’s teamsheet showed four changes from the weekend victory at Leeds United, with Joe Gomez coming in for his first start since November 2020. There were also berths for Henderson, Naby Keita and Origi.

Injury sustained at Elland Road ruled Harvey Elliott out, while Virgil van Dijk, Thiago Alcantara and Sadio Mane were named on the bench.

In what was, somewhat remarkably, the first competitive meeting between the clubs outside of a major final, Anfield was a fitting setting for the clash of two of Europe’s most storied teams.

Liverpool responded to the decibel levels inside the stadium with a breathless start, too. And after Origi had sliced wide from an Andy Robertson centre, Diogo Jota had a shot deflected behind by Tomori inside the opening five minutes.

Next, Joel Matip’s planted header towards the top corner from an Alexander-Arnold corner was claimed under the bar by Maignan.

But the early dominance paid off with nine minutes gone. Alexander-Arnold exchanging passes with Salah before charging into the box and having a close-range shot find the net via a deflection.

The relentlessness didn’t diminish, either. Salah then had a seemingly goal-bound shot deflected behind by Tomori before he was presented with an opportunity to net from the spot after Ismael Bennacer handled an attempt from Robertson.

The Egyptian’s effort, however, was thwarted by a flying save to his right by Maignan to deny the hosts a second after 14 minutes of play.

Salah was repelled by the Milan custodian again on the half-hour, this time seeing an edge-of-the-box snap-shot pushed over before it could drop into the top corner.

But the contest was turned on its head in the final three minutes of the half when Milan struck twice in a minute to go in ahead at the break.

First, a well-worked move opened up an opportunity for Rebic inside the box, who finished smartly from Rafael Leao’s pass.

Then, Diaz tapped in from yards out after Theo Hernandez’s shot was blocked on the line by Robertson, leaving Anfield in disbelief after a half largely dominated by the hosts.

Liverpool set about making amends as the game got back under way, though they survived an early scare when a Simon Kjaer effort was ruled out for offside.

Nonetheless, the Reds required just four minutes to restore parity as Origi’s intelligent scooped pass into the area was nudged in by Salah.

After Robertson had a drive blocked by Maignan, Origi made way for the home side with a knock. Mane was his replacement.

Jota was left clutching his head in his hands on 68 minutes when he weaved space for a shot inside the box, but was left frustrated by a last-ditch block.

But Liverpool went back in front a minute later when Henderson met a clearance to the edge of the box from a corner with a crisp first-time volley that arrowed into the bottom corner to make Anfield erupt with noise.

Milan served up some moments of concern in the final stages as they went in search of a share of the points, but the hosts were able to see out the remainder and begin their European campaign with victory.