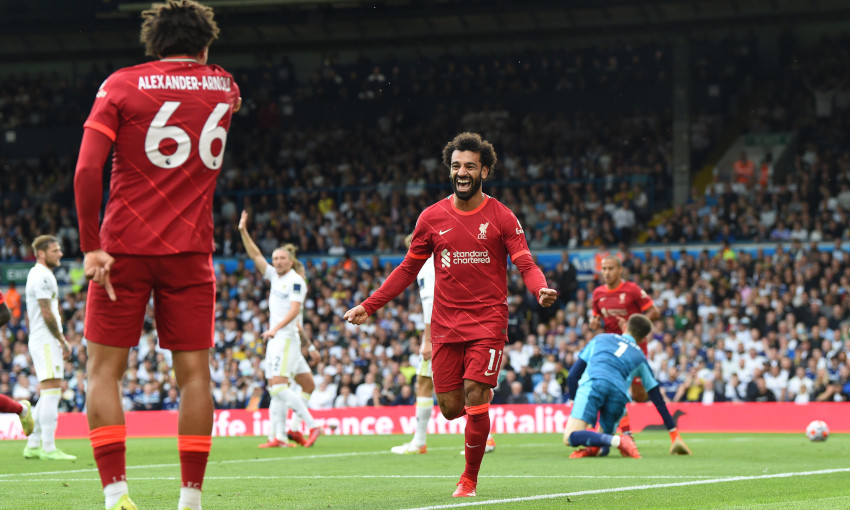 Liverpool made a winning return to Premier League action with a 3-0 victory at Leeds United on Sunday that was marred by a serious injury to Harvey Elliott.

Mohamed Salah gave the Reds a deserved lead during the opening half with a typically unerring finish from Trent Alexander-Arnold’s assist – his 100th career goal in the division.

Jürgen Klopp’s side fashioned numerous chances to net again and took one early in the second period as Fabinho prodded over the line when the ball ran his way from a corner.

But the day and the result – which was increased by a stoppage-time Sadio Mane goal – was soured by the sight of Elliott being stretchered off on the hour after receiving treatment for a tackle by Pascal Struijk that saw the Leeds man sent off.

Klopp made two changes to his starting line-up as Thiago Alcantara and Diogo Jota came in to replace Jordan Henderson, who was named on the bench, and the injured Roberto Firmino.

A raucous atmosphere greeted the sides when they emerged in front of a capacity Elland Road crowd, and Leeds sought to leverage that advantage with their energy and pressing in the early stages.

They created the contest’s first chance in the fifth minute, countering at frenetic pace when Salah’s claims for a foul deep in opposition territory were dismissed.

Raphinha led the charge down the right-hand side and waited for the right moment to tee up Rodrigo in the middle, whose hard, rising hit was punched away by Alisson Becker.

Liverpool continued to pass calmly in the face of the hosts’ pressures and from a precise Salah delivery into their box, Jota controlled with his chest and nudged at goal, his attempt tipped out by Illan Meslier.

But Klopp’s men soon did take the lead, courtesy of an impressive 20th-minute move.

Joel Matip carried the ball forward to the edge of the Leeds area and having first swapped passes with Salah, guided play out to Alexander-Arnold on the right wing.

He sent a firm low cross along the front of the home goal and Salah was there to clinically fire it beyond Meslier, bringing up the personal landmark of a century of Premier League strikes. 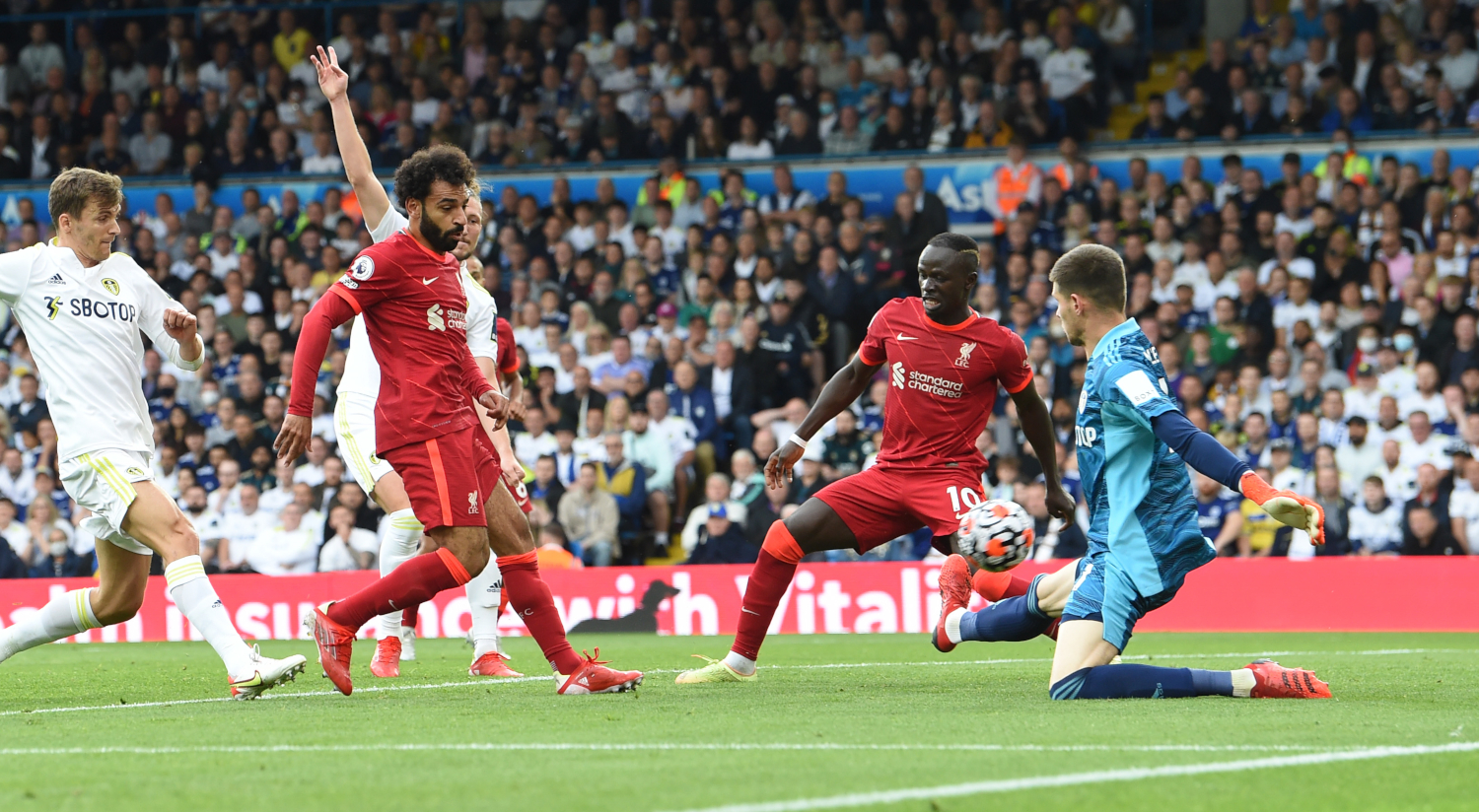 That lead could have been doubled on multiple occasions during the subsequent seven minutes.

First, Thiago’s celebrations were cut short after the No.6 headed in Salah’s pinpoint back-post cross, the latter having been offside when he received the ball in the build-up.

Mane then misjudged his finish when Jota drove through the Leeds defence, again via the right channel, and picked out his fellow forward with a cross. Too high from the Senegalese.

Then, Elliott was denied twice in quick succession, seeing an initial blast blocked by Liam Cooper, before his follow-up effort to clip past Meslier was thwarted by the Leeds goalkeeper.

Liverpool’s control was ever growing and both Mane and Elliott went close with low strikes from 20-yard range, though the difference on the scoresheet remained just one.

And Leeds might have levelled a minute before the interval, but Luke Ayling harmlessly lifted his finish clear of Alisson’s crossbar having been found in space at the back post by Rodrigo.

The Reds looked certain to produce the second goal just four minutes after the restart.

Mane and Jota combined in an intelligent exchange of passes that eventually released the former to bound through clear on goal.

But the No.10 was prevented from delivering a clean finish as he sized up the angle, Kalvin Phillips having chased back to pressure him, and when the ball spun loose in the area, Leeds recovered to deny Elliott and Salah a simple conversion.

Instead, the visitors netted from the resulting corner.

Virgil van Dijk met it with a knockdown header that fell for Fabinho nearby, whose first effort from close range was blocked by Patrick Bamford, only for the midfielder to nudge over the line at second asking. 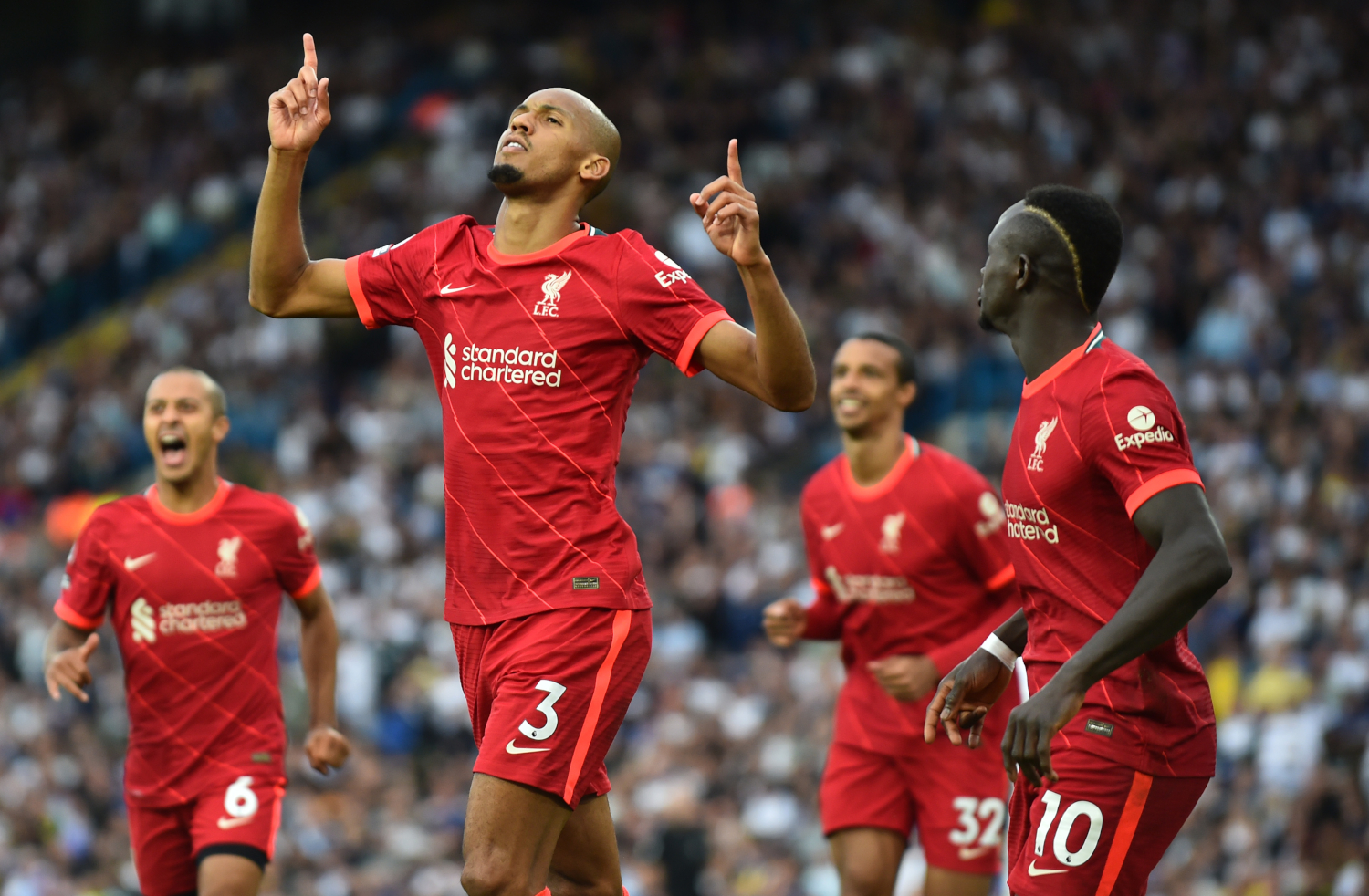 Liverpool’s buoyant mood paled into insignificance on the hour mark, however, as Elliott suffered what appeared to be a serious impact injury.

The teenager was fouled by substitute Struijk – prompting a red card from referee Craig Pawson – and immediately required medical attention before leaving the field on a stretcher.

Leeds tried to rally with 10 men, though needed an outstanding last-ditch block by Ayling to stop Mane from scoring a third when freed into the box by Salah’s diagonal pass.

Ayling again frustrated Mane, this time invited to shoot from a Jota tee-up into the other side of Leeds territory, and Alisson had to scurry to push over Bamford’s dipping effort from the centre-circle.

But Mane finally got his goal, spinning and sending a finish past Meslier in the second minute of eight added on, to secure the Reds a result that takes them level at the top of the fledgling Premier League standings.