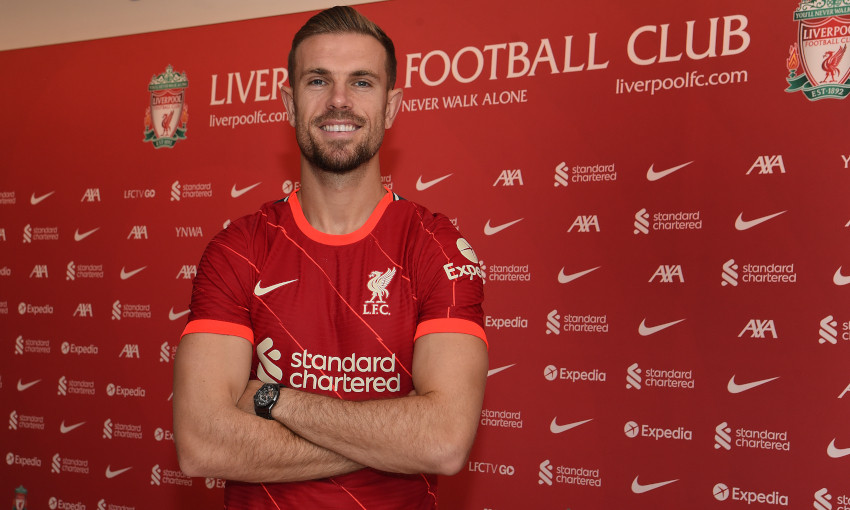 Jordan Henderson has signed a new contract with Liverpool Football Club to commit his long-term future to the Reds.

The captain put pen to paper on the deal at the AXA Training Centre on Tuesday, ensuring his 10-year spell with the club will be prolonged into the years to come.

Henderson told Liverpoolfc.com after inking the terms: “I’m obviously very honoured and proud to continue the journey I’ve already been on here.

“It’s amazing to finally get it done and just concentrate on looking forward and what the future may hold.

“I’m in a different place of course, as a player and as a person, from when I first walked in. I’ve learned and grown a lot over my time here, and I’ve got to thank a lot of people for that.

“I’ve loved every minute of it, even when I look back at the tough times, I was still enjoying being a part of this football club. The longer I can do that, the better for me really. I want to be here as long as possible, I’ve always said that.

“To continue this journey is incredible for me and my family, and I hope the fans and the club feel the same way.”

Henderson celebrated a decade as a Liverpool player earlier this summer, with June marking 10 years since he completed a transfer from Sunderland.

He has since made 394 appearances for the Reds and scored 30 goals during a tenure that has seen him collect five winner’s medals.

In 2012, Henderson was part of the Sir Kenny Dalglish side that lifted the League Cup at Wembley, before going on to hoist aloft the Premier League, Champions League, UEFA Super Cup and FIFA Club World Cup as club captain.

The 31-year-old has also amassed a number of personal accolades, including the 2019-20 FWA Footballer of the Year, England Senior Men’s Player of the Year 2019 and Liverpool Fans’ Player of the Season 2019-20. Earlier in 2021, Henderson was also awarded an MBE for services to football and charity, particularly during the COVID-19 pandemic.

“I feel as hungry as I did when I first walked in 10 years ago, to prove to people that I deserve to be at this football club and give absolutely everything every single day for the badge, for the fans and for each other in this building.

“If we do that, I feel as though we’ve got a good chance of being successful.”