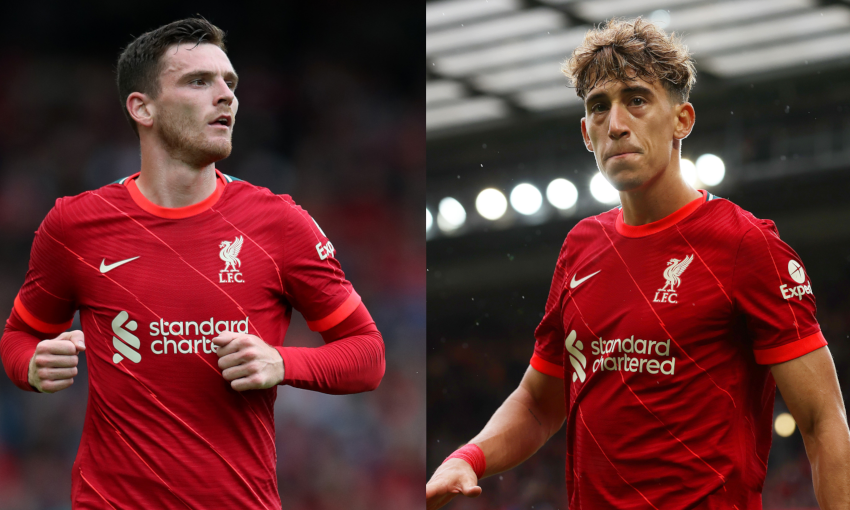 There is no ‘battle’ between Andy Robertson and Kostas Tsimikas for Liverpool’s left-back berth, Jürgen Klopp insisted, though the manager does welcome the competition for the role.

An ankle injury sustained in the pre-season friendly with Athletic Club meant Robertson has not figured in the Reds’ first two games of the new Premier League campaign, with Tsimikas impressing in his absence.

The Scotland captain was on the bench for last weekend’s win over Burnley, however, and both players are fit and in contention to start Saturday evening’s Anfield encounter with Chelsea.

“There's no battle because the players don't battle each other,” Klopp said during his pre-match press conference when asked about the left-back options at his disposal. “It’s about who is in good shape, who is playing in the position in which way.

“First and foremost, I'm more than happy and really pleased with how Kostas performed in the last two games and, actually, in the whole pre-season. It was a big step for him, he had a tough first year at Liverpool.

“I told him that, it's not that anything was intentional or planned – let’s bring in a Greek player and then don’t play him a whole year. The problem that we had was first Kostas had to adapt and then was injured, got COVID and all these kind of things. Then our defensive line had to get changed pretty much every week. Then bringing in a left-back before who didn't play a lot before, it would have just been really difficult.

“Now he is in the best moment since he is here, that’s one thing and that’s great. We have a long season ahead but for this game, Robbo has not now been in training since yesterday - he was in training early enough to be in the squad for last week, so nobody would ever – especially not in that situation – rush Robbo back. There is no need for that. But it's not that we open the race and say, ‘OK, Robbo, whatever you did in the last few years, I don’t care and now Kostas is there...’

“We have two left-backs, really good left-backs, and it was always the idea to have that because it’s a very special position and Millie had to play it more often than he wanted. It is obviously much better when you have really good options.

“Robbo played an incredible season the year before, he was maybe the best player for Scotland at the Euros and we should all not forget that. I don’t forget it. It does not mean that from now on he can play like he wants, but he never did. He's an animal, he works incredibly hard, so having these two options is great and both will have their games for sure this year if there are no injuries, which I don’t hope for.

“There's nothing bad to say, but a ‘battle’ is a wrong word for it because I just don’t like when players have to battle for a position. Players have to train as good as they can, they have to give me the opportunity to make a decision if they should be in the line-up for the weekend, on the bench for the weekend or whatever.

“That’s the job the boys have to do and the rest they have no influence on because they are my decisions.”