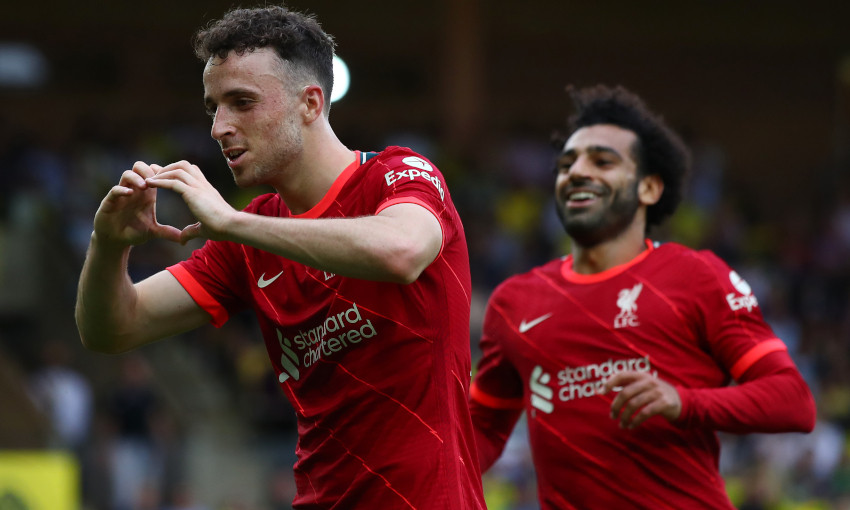 Liverpool got the 2021-22 season up and running with a comprehensive 3-0 victory over Norwich City at a full-capacity Carrow Road on Saturday evening.

Diogo Jota’s first-time finish nudged the Reds into the lead after 26 minutes before his replacement, Roberto Firmino, added a second shortly after coming on in the second half.

Mohamed Salah made it 3-0 with a fine curled finish on 74 minutes, becoming the first player in Premier League history to score on five successive opening weekends in the competition.

And in a further boost for Jürgen Klopp’s side, Virgil van Dijk completed the duration of the contest, played in front of 27,000 fans, to make his first competitive appearance in 10 months.

Liverpool’s first teamsheet of 2021-22 showed a start for Van Dijk, who was handed his first competitive appearance since October of last year after undergoing knee surgery.

He partnered Joel Matip, while Joe Gomez and summer signing Ibrahima Konate were named on the bench.

A raucous atmosphere welcomed the teams onto the field, with Liverpool playing in front of a stadium at full capacity for the first time since March 2020.

For the hosts, it marked their return to the top flight having gained promotion from the Championship at the first time of asking last term.

As a result, Norwich made a sprightly start, but it was the Reds who mustered the first threat with 10 minutes on the clock.

Kostas Tsimikas did well to wriggle into space before crossing from the left. With Jota lurking, Ben Gibson had to clear over his own crossbar inside the six-yard box. The resulting corner saw Naby Keita recycle the ball back into the danger zone, where a glancing header from the visitors’ No.20 was tipped over by Tim Krul at full stretch.

Soon after, the Canaries’ goalkeeper had to deny Salah’s snap-shot after Trent Alexander-Arnold had done superbly to pick out the Egyptian in the area.

At the other end, Teemu Pukki was thwarted by Alisson Becker having escaped into space behind the visiting back four.

Salah then sent a first-time volley from Sadio Mane’s centre a foot wide of the post as Liverpool threatened once more.

The Reds’ pressure finally told on 26. Alexander-Arnold swept into space on the right before angling a pass into Salah, who got a slight touch, directing the ball into the path of Jota. The Portugal forward made no mistake in sweeping home first time from 12 yards.

One was almost two soon after, but Pierre Lees-Melou cleared Matip’s goal-bound shot away from in front of the line, with Krul grounded. 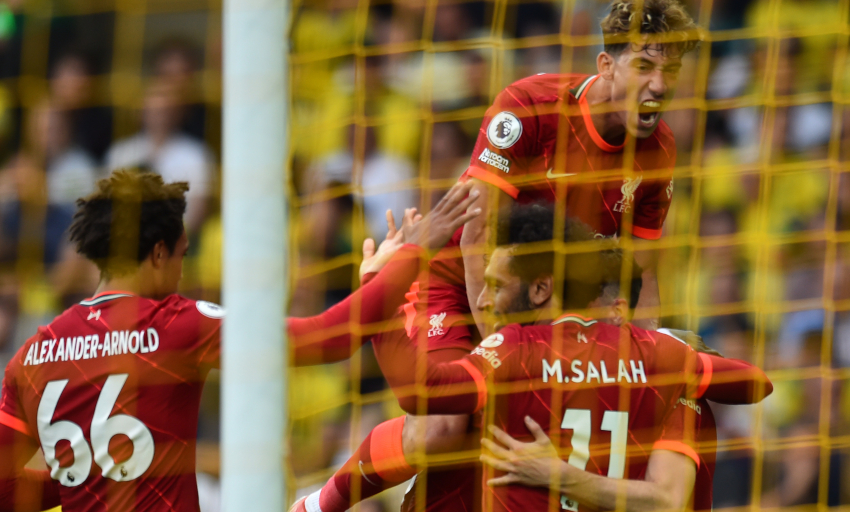 Liverpool continued to assert pressure after the restart, with Mane having an effort blocked from crossing the line by Max Aarons. Alexander-Arnold then fizzed a free-kick a few inches too wide of Krul’s post.

On the hour, Klopp elected to replace Jota and Alex Oxlade-Chamberlain with Brazilian duo Firmino and Fabinho – moments before Krul saved from a low Tsimikas drive across goal.

Nevertheless, the Reds added a second four minutes after their arrival when Salah intelligently played a blocked Mane shot back across the box, enabling Firmino to divert when unmarked.

Salah helped himself to his customary opening-day goal with 16 minutes remaining, arching a shot beyond Krul from just inside the area after Norwich had glanced a corner away. In doing so, the No.11 set a new Premier League record with his fifth successive opening-day goal.

Norwich were denied the opportunity to reduce the arrears as the game ticked towards its conclusion, with Alisson producing a fine sprawling stop at the feet of Gibson inside the six-yard box.

However, the outcome had long since been decided as Liverpool got the campaign up and running with a victory.