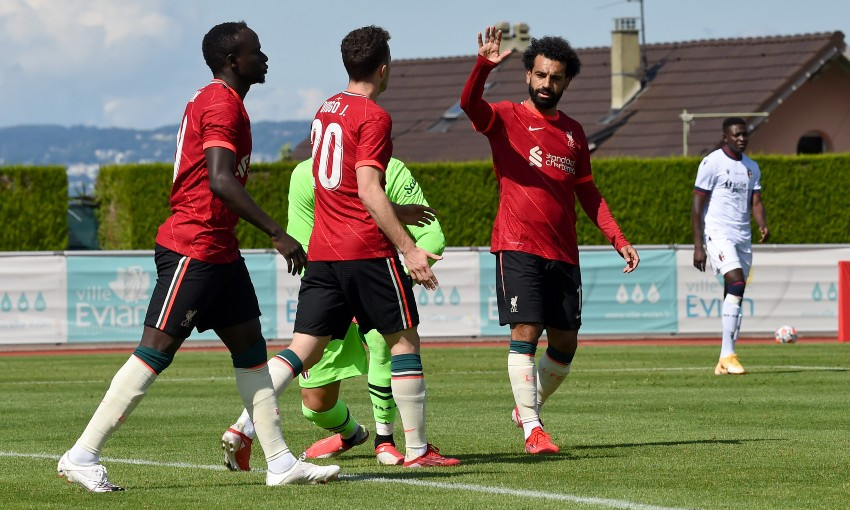 Liverpool beat Bologna 2-0 and 1-0 in respective hour-long friendlies in Evian on Thursday afternoon.

In the day’s first fixture, Diogo Jota slotted the Reds into an early lead in France before Sadio Mane added a second soon after as Virgil van Dijk chalked up 43 minutes of action.

Then, in game two, Joe Gomez played for 44 minutes and Alisson Becker, Fabinho and Roberto Firmino notched their first appearances of pre-season in a 1-0 win for Jürgen Klopp’s side.

Takumi Minamino grabbed the only goal of the encounter, steering in from a fine Xherdan Shaqiri pass, while Divock Origi struck a penalty against the post in the second half.

Highlights: The best of both games v Bologna

With the double-header successfully complete, Liverpool will return to Merseyside on Saturday ahead of the Anfield friendlies with Athletic Club and Osasuna after almost four weeks in Austria and France.

The game got under way with Liverpool sporting the unusual combination of the red home jerseys and away shorts and socks due to an unexpected clash of kits, with match officials deeming the stone shirt too indistinguishable from Bologna’s white tops. Logistics meant the team were unable to change into full home strip at the venue.

It almost began with a goal for the Italian team as Nicola Sansone held off the attentions of Trent Alexander-Arnold before clipping an effort beyond the far post of Caoimhin Kelleher.

But Liverpool would break the deadlock with seven minutes of the hour-long fixture elapsed. Jota pounced on Kevin Bonifazi’s wayward pass out of defence and weaved his way beyond his attempted recovery challenge before slotting low into the corner. 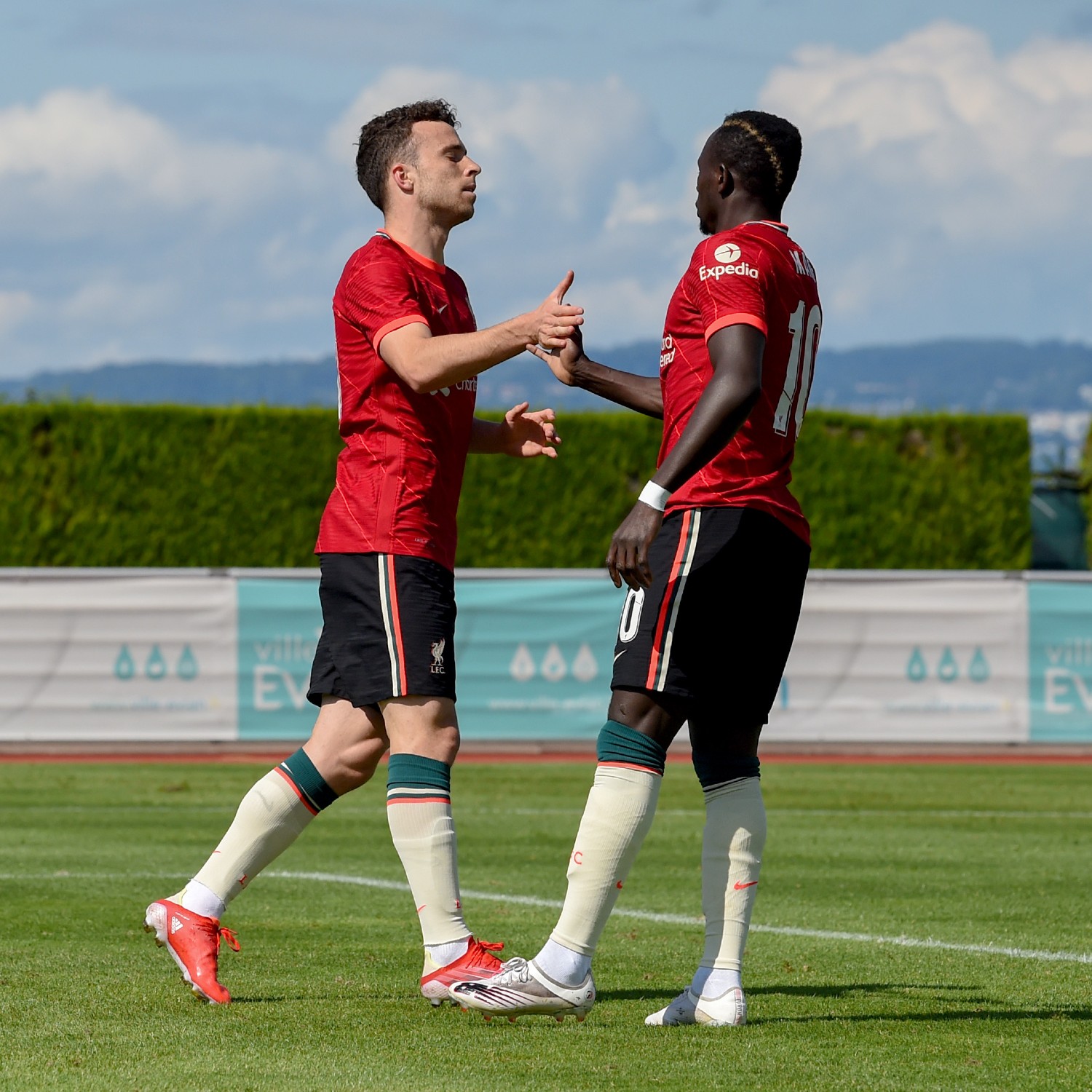 The Reds furthered their lead moments later when Mane latched onto another misplaced pass – this time from Emanuel Vignato – and rolled in after rounding Lukasz Skorupski.

A third almost arrived with 25 minutes on the clock when Jota brought the ball until control at a corner; however, this time his near-post drive was repelled by Skorupski.

The Portugal forward was lively throughout the opening half and went close again when he headed over just before the break.

Jota was involved once more in the immediate moments after the restart. This time a diving header from Andy Robertson’s centre was parried by the goalkeeper before Mohamed Salah’s follow-up crashed against the challenge of Bonifazi.

Salah then lashed a half-volley wide from the edge of the box after a corner was cleared into his path.

After 43 minutes, Van Dijk made way for Rhys Williams – more than doubling his time on the field from his first appearance last week – and Salah rattled the crossbar from close range after Jota’s cross had deflected his way.

Bologna had a couple of late chances to reduce the arrears, but Mattias Svanberg sent a header at a corner spinning wide of the far post before Riccardo Orsolini was deemed offside after tapping in from close range.

The day’s second game featured starts for Liverpool’s returning Brazilian trio of Alisson, Fabinho and Firmino, as well as Gomez.

Kostas Tsimikas was the first to register an attempt on goal when his shot at the second attempt was gathered by Francesco Bardi.

The breakthrough was made with 14 minutes gone, however, when Shaqiri’s lofted pass from the right found Minamino’s run. The forward netted by sweeping in on the half-volley. 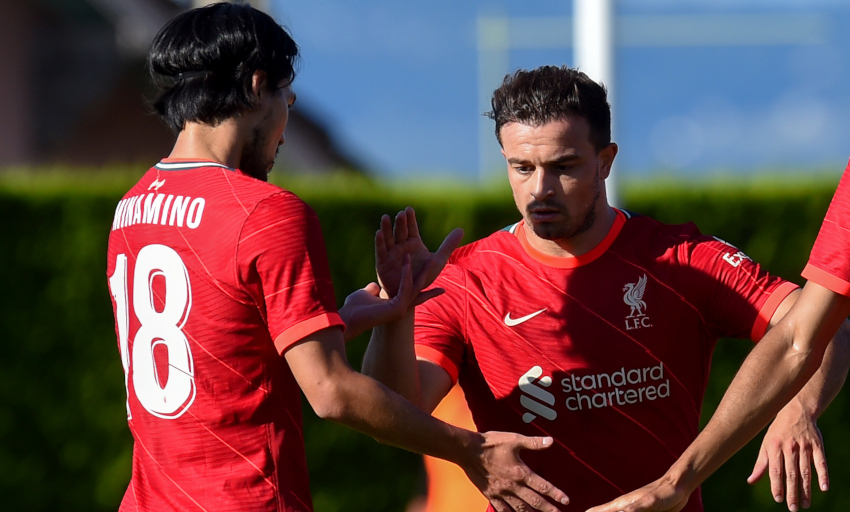 Shaqiri then crashed an effort against a defender before Firmino powered a header wide from point-blank range from a Tsimikas centre.

Adrian, Kaide Gordon, Origi and Leighton Clarkson replaced Alisson, Shaqiri, Firmino and Fabinho at the break – and a deflected strike from Curtis Jones was a whisker away from making it 2-0.

At the other end, Gianmarco Cangiano brought a save out of Adrian with a low drive, while Tsimikas saw a near-post blast palmed away by Bardi.

On 44 minutes, the Reds’ next batch of changes took place, including the substitution of Gomez for Nathaniel Phillips.

Then, Origi had a header cleared off the line by Sydney van Hooijdonk from an Alex Oxlade-Chamberlain free-kick before being presented with a chance to score from the penalty spot.

Woodburn was tripped by Gary Medel inside the box, but Origi’s kick cannoned against the base of the post. Nevertheless, the Reds had done enough to make it two wins from two in their final fixtures ahead of their weekend return home.