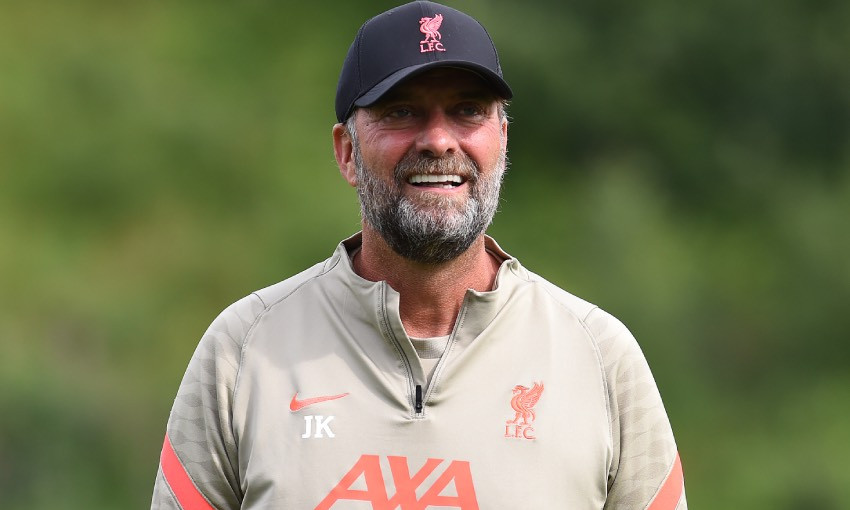 Jürgen Klopp has explained the thinking behind a change of scenery as Liverpool entered their third week of pre-season training in Austria.

The Reds arrived at their new base in Tirol on Sunday, making the two-hour drive after opening their 2021-22 preparations in the state of Salzburg.

The boss sat down with Liverpoolfc.com at the team hotel on Monday afternoon to discuss his squad's new location, the upcoming friendly with Hertha BSC and more.

Read on for a transcript of the interview...

Jürgen, day 15, a new location, how pleased are you with the work done in the last two weeks?

Very, very much so. It was great to be in Saalfelden and the Brandlhof because they delivered the perfect circumstances for us. The weather was tricky in moments but we always could make our session and push on through because we had different options for pitches. So it worked out pretty well, more and more players coming back – the last two now were Robbo and Diogo, getting closer. I think [a] change of location makes absolute sense after such a long time. It's unbelievable but it didn't feel that long so far, it was pretty quick, if I'm honest, which is probably a good sign. Now we are here, we had our first two sessions here on the pitch and good as well – unbelievable scenery around, the mountains, the Alps, ski-jumping slopes, incredible. It's all pretty eye-catching but then the boys are obviously here to train, we all are here to work hard and we do that. Today is probably a day of the days. This morning was an intense session, this afternoon will be incredibly intense and then tomorrow a little bit less, we are already minus one for the game. Pre-season at its best.

What are the benefits of the change in scenery?

Actually I don't know 100 per cent, but it was clear that we don't want to stay four weeks. I think now everybody knows why we had to stay four weeks away pretty much, and it was always clear we don't want to stay then four weeks in the same place, as good as the Brandlhof is – everybody likes it, it's pretty much like coming home when it was only the second time that we were there. Now coming here, learning something completely new and obviously a top-class hotel, no doubt about that, it's important because you cannot always have the same surroundings when you work that intense. It's a tricky challenge for all of us, so far it worked pretty well but in situations like this when a lot of people are for a long time in a close space together – because we are in a bubble, they cannot go out or whatever, these kind of things – that can be a challenge. So far it was really good and I hope we can be that good for the next 13 days as well.

We've heard Tirol is a place you know quite well...

I had here a training camp in 1987 with Eintracht Frankfurt U21s, so I remember that – even when it's 33 years ago, incredible number!

You mentioned about the bubble and everyone being together, in some ways it's like a little Kirkby out here...

It is but we don't sleep at Kirkby, that's the big difference. We go home in between, we don't train every day twice. Here we don't train every day twice but even if the boys don't train, there's something else to do with you, with the guys or whatever. It's an intense time but it's all good. It shouldn't sound not at all negative, I'm really about the opportunity that we can do it. It's the longest pre-season we have together. It's not the longest pre-season of our life but since I was at Dortmund, having a big number of players, having them together for four-and-a-half weeks is really rare. Obviously in the last 10 days then pretty much some of them coming back as well, some others coming back as well. That's good. In the end when we are back in England, we will be complete and then we have to make sure that we are ready for the first game, for the second game, for the third game and all this stuff, for a very intense season because it will be intense.

Hertha BSC are next up – do you expect a similar test to FSV Mainz 05 as they were fairly close in last year's Bundesliga?

I didn't watch now Berlin, I don't know which players they have available and stuff like this. They sold a striker, if I'm right, but I don't know exactly. It's pre-season, we don't make an analysis before we play a pre-season game because part of the challenge is that you don't know a lot about the opponent. But it's a good team and they both – Mainz and Berlin – fought for staying in the league. Obviously the financial resources in Berlin are completely different, it's an interesting project what they have there and they have big dreams and big expectations but I don't know about the team in the moment, but it's not too important. I know people probably outside think, 'Yeah, it's important, we have to play the football we want to play.' We do that mainly in training but with the number of sessions we have, it's completely normal... you need the games for plenty of reasons but it's not for shining. It's just for working through that. I don't like actually pre-season games when you win it four or five nil – it can be the first game but they have no real value because it can lead you on the wrong path and all these kind of things. Hard work, getting through it. Making mistakes is not my favourite thing to do but if you make it then it's easier to work on it and it's the best time to work on it and we can sort that until the season starts. So, it will be a tough test definitely and we will see how we can get through it.