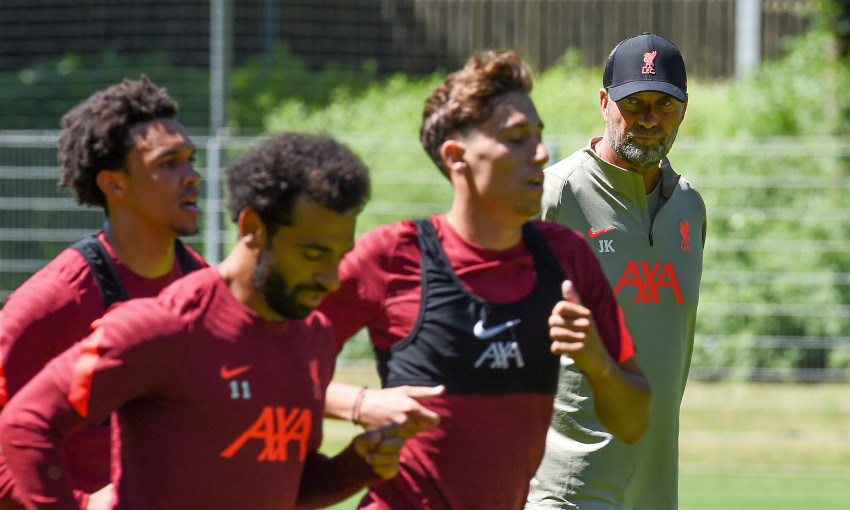 Jürgen Klopp has explained why Liverpool will begin their pre-season fixture schedule with back-to-back 30-minute matches this evening.

After little over a week of training at their camp in Austria, the Reds will tackle FC Wacker Innsbruck and VfB Stuttgart in half-hour mini-games at 5pm and 5.45pm BST respectively.

The manager is delighted to have been able to organise the unusual double-header as a first opportunity for his players to compete against opponents this summer.

And he will be instructing his squad to attack the friendlies with ‘all we have’ in an initial step towards building up rhythm for 2021-22.

“I’m so happy we could do that, really,” Klopp told Liverpoolfc.com. “We usually don’t find opponents for that because they say, ‘What would we want with 30 minutes?’

“But we had a seven-week break; so, not all, pretty much four or five people, but we had a long break, the longest for a long, long time. So we decided not to play too early. We wanted to give ourselves time to get in, to judge the intensity of training constantly, say, ‘That’s OK, here we want to do more, here we do less.’ We can do that between two sessions, we can do that between two days. That’s what we do.

“And then you have the first game and after that long time 45 minutes is a tough one. You see that in all pre-seasons when you make 11 changes at half-time and the guys who leave the pitch after 45 minutes are not sitting in the dressing room saying, ‘Why did I come off?!’ They are really happy.

“I prefer this time that we go just for 30 minutes with really all we have, absolutely pretty much no break. Like you might hear us shouting sometimes in training where we then make these little breaks only but the rest is really just: go, go, go. That’s what I would like to see and see where it leads us to.

“It will not be the most organised, all this kind of stuff – how always. What we need to get back immediately is the impulse for the things we want to do and you can do that in games like this. It could be a bit chaotic or could be a bit wild – no problem with that.

“But this is the start for us playing-wise and I’m really pleased we find two opponents who say, ‘Yeah, the 30-minute idea is a really good idea.’”

With a squad of more than 30 players at his disposal, Klopp confirmed he is likely to use two entirely different XIs for the contests.

Asked if intensity is the key attribute he wants the team to exhibit, the boss said: “Yeah, absolutely. It’s a session where it’s 30 minutes – it’s 30 minutes, that’s a lot but it’s only 30 minutes.

“That means we don’t have to react the next day with recovery or stuff like this; we just put in two sessions the next day and can carry on. But play the game anyway, 11 v 11 against two opponents, with changes and all these kinds of things. That’s the cool stuff about it.

“Usually the games are so important in pre-season but they interrupt the rhythm for training. This game doesn’t do that – that’s cool.”