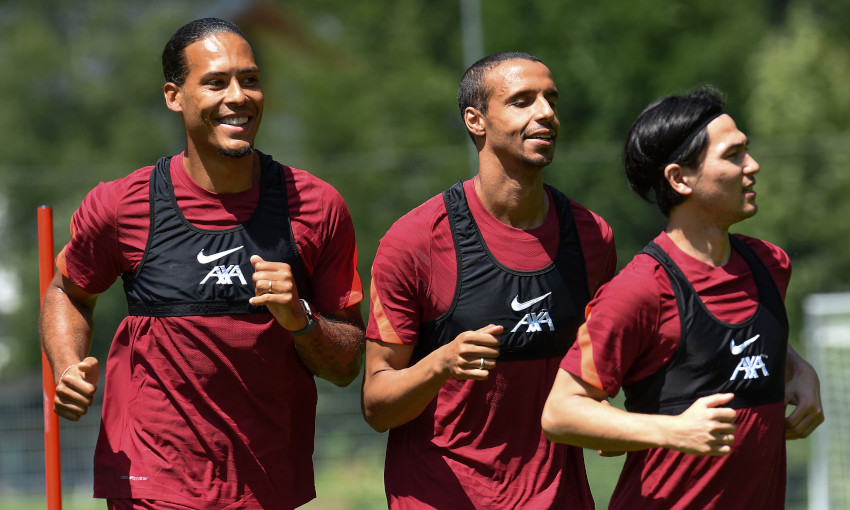 The quartet are part of Liverpool’s 34-man squad that began pre-season training at the team’s base in the Austrian state of Salzburg on Monday.

Earlier today, Van Dijk, Gomez and Matip joined in the day’s first session alongside their teammates as they continue on the road back to first-team returns after being sidelined last term.

Speaking exclusively to Liverpoolfc.com at the team hotel, Klopp detailed how the Reds will look to carefully re-integrate the four over the coming days.

“No, they aren’t [at the same level as the others], but it’s different,” said the boss. “Let’s start with: all four look really good, I have to say. Look really good.

“So, especially Virg and Joe will not have double sessions now for the first few days with the team; they have a second session of the day but it’s with Andreas Schlumberger, with the rehab department, physiotherapy, these kinds of things. That’s for these two. [They] look really good. I don’t know exactly when we can make the next steps but it will happen in the next four weeks, for sure – we will get a big step forward.

“Joel looks good, absolutely, he is the closest probably to normal training and then we will see when we get him started for playing.

Liverpool will contest a series of pre-season friendlies while in Austria and will move to another camp based in Tyrol after wrapping up in Salzburg.

Among the travelling party are a clutch of youngsters from the Reds’ Academy – and Klopp explained what he’s hoping to gain from the camp.

“[It’s] a big group here – a very youthful group but a lot of experienced players here as well,” said the boss. “Everything we need is here.

“Of course, the guys from the Euros and the Copa [America] are not here yet, they have a well-deserved holiday still. But we still try to use the time as good as we can to bring the young guns a little bit closer to the first team, and to bring all the other guys in the best possible shape as quick as possible. It will take time, we had a long break, which was absolutely needed.

“We didn’t start now immediately with the highest intensity, of course. We try to get in step by step, having the first game in a few days and these kinds of things. So, I’m really thrilled being back, to be honest.

“It was a really good holiday and since two or three weeks I could have been back already, mindset-wise. But it was not bad to have them as well. And now we are here full of energy – let’s get started.”