It was an iconic father and son moment watched by millions of people around the world. And it almost did not happen.

When Brian Henderson took his seat at the plush Estadio Metropolitano for the 2019 Champions League final, he was preoccupied.

There was a natural nervous tension, of course: his son, Jordan, was about to lead Liverpool out for their second successive attempt at lifting the European Cup.

But Brian was thinking further ahead. If Jürgen Klopp’s team did achieve their aim and defeat Tottenham Hotspur on that humid night in Madrid, how was he going to get himself down to the touchline to embrace Jordan?

His anxiety was soothed when he heard of a potential route – circuitous but possible – through the bowels of the Atletico Madrid stadium and back up to pitch level.

So Brian settled in to watch the match and see if his plan would be needed.

Mohamed Salah’s second-minute penalty gave Liverpool an advantage but the final remained on a knife-edge until, with 87 on the clock, Divock Origi thrashed a low shot into the net to secure the club’s sixth triumph in the competition.

It was time for Brian to make his move.

As he navigated along the path suggested to him, through the inside workings of the arena, including office spaces and toilets, doubts crept in. Would this odd journey really take him to Jordan?

Such was the length of the route, he missed the trophy lift and the preceding ‘shuffle’ that would become his son’s often-used trademark over the next year.

But, at last, Brian saw green turf and bright lights. And Adam Lallana.

He had made it.

“I said, ‘Adam, do us a favour – go and get the boy.’ ‘Right, right… Oh my God, how did you get down?!’ That’s when Jordan came over and that’s when we had an iconic moment as it turned out,” he explains in a new LFCTV documentary celebrating Henderson’s 10 years at Anfield.

Father and son fell into each other’s arms for a prolonged, emotional hug that captured the enormity of what the midfielder, his teammates and the club had done.

“I don’t know how many hits it had on YouTube… it was quite a few! I was amazed,” Brian continues. “I just didn’t see anybody, I didn’t see any photographers. I just saw Jordan, I saw the players and I was focused on them.

“I had no idea until I turned and then I just heard this click, click, click of all the cameras going. I didn’t expect it, to have that moment with him, and be on so many cameras and TVs.

“I was just so proud of him. I was telling him that, among other things that are quite private. At that stage he was 29 and I had never had an embrace with him like that; I obviously had when he was a kid, but as you get older you tend not to be so tactile, don’t you?

“So I didn’t want to let go. And I don’t think he did either, because he had seen the cameras – I didn’t, they were behind me. He is obviously buried and doesn’t really want to lift his head up until he gets himself composed, which took quite a while.

“I just said, ‘You’ve done it, I knew you would, I told you last year you’d lift it, didn’t I? See this time next year, you’ll lift the Premier League. I’m telling you, you will, with this squad you will, and with that manager.’

“I was absolutely elated.” 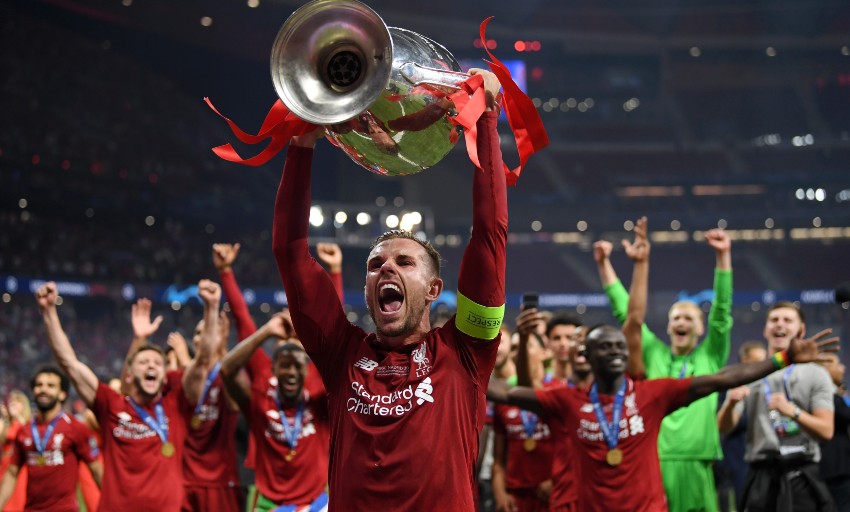 It was a fitting, cathartic scene for a relationship that has been entwined with football since before Jordan was even born.

Indeed, the future Reds skipper’s arrival into the world provided a rare – perhaps unique – moment when the game put father and son at odds.

On the eve of his birthday, June 17, 1990, England were set to face Netherlands in a group-stage tie at the World Cup in Italy and Brian was eager to tune in to the big match.

“I was gutted because the waters broke and I wanted to watch the game! I said, ‘Can he not hold on a bit?’” he recalls with a laugh.

“But, anyway, we ended up in hospital and she was in labour for 26 hours or something, so Jordan was born the next day. I missed the game, I was gutted – but I got a beautiful little son out of it, so that cheered me up the next day.”

Brian was born in South Shields and had moved to Sunderland after meeting Jordan’s mother, and it was there where his prodigious footballing talent was fostered.

The young Henderson evidenced his potential by mastering control of a futsal ball in the family’s garage and would be snapped up by the Black Cats’ Academy at the age of seven.

Dad happily let his impressive golf handicap slip as he devoted increasing time to supporting his son’s football prospects, with a training session or match on the agenda almost every day.

“He just excelled in most of the positions he played,” notes Brian. “He played centre-forward, he played midfield.

“A bit like he does now; I think the only place he hasn’t played at Liverpool is in goal, isn’t it?

“He played all over the place and wherever he played, he played really well. But it was the love of the game that he had; you could never knock him down. Very, very rare you would. Sometimes it would get him down a little bit if he didn’t win a game, which wasn’t very often when he was younger.”

Jordan progressed up through the ranks at Sunderland to earn a first-team debut at the age of 18, when Roy Keane sent him on as a half-time substitute in a Premier League fixture at Stamford Bridge.

He walked off the pitch that November 2008 afternoon with his side beaten 5-0 and with a new-found appreciation of the physical demands required in the top flight, but nevertheless with conviction that he would be able to hold his own. 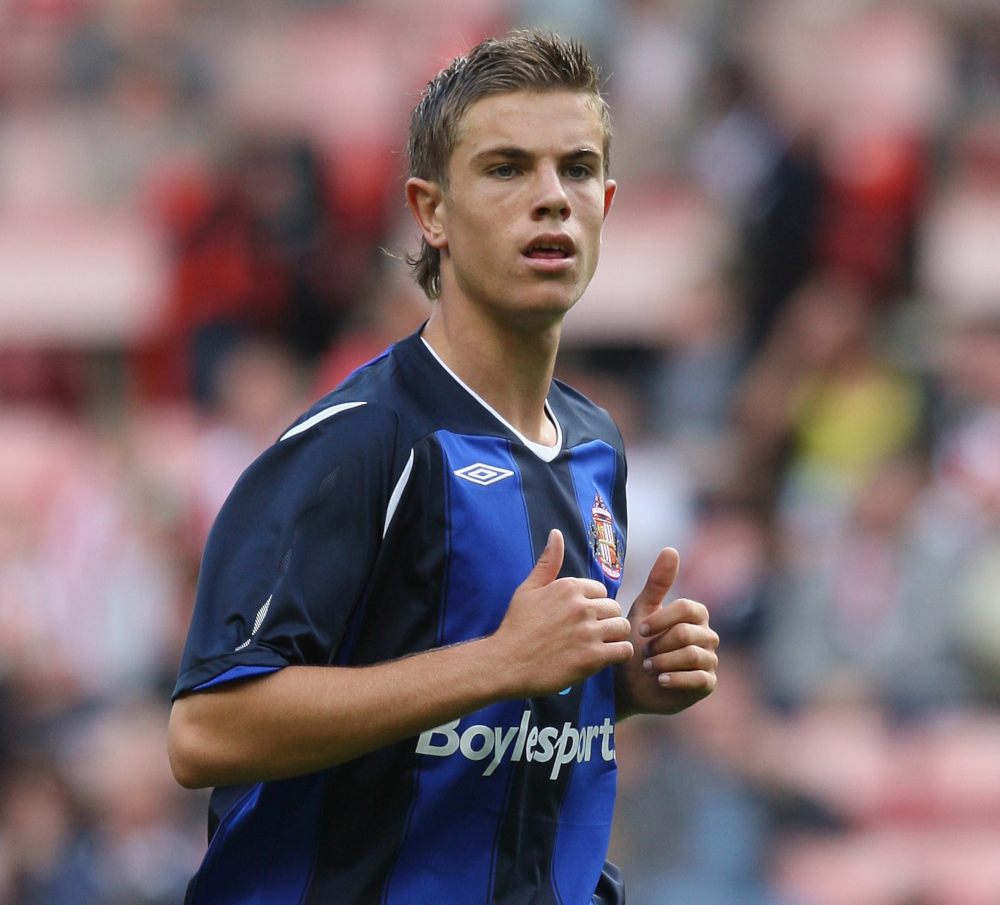 Henderson in action for Sunderland in 2008

And the teenager’s thirst for self-improvement was shown by a bold decision a few weeks later.

“The next two or three games he was in the squad but he didn’t get picked. Then he got dropped out of the squad one game, maybe four weeks after that debut,” says Brian.

“And he went and knocked on Roy Keane’s door and asked him why. I think Roy gave him the answer: because you’re learning and I’ll put you in when I think you should be in. He was happy with that.”

The midfielder went on to play more than 70 games for Sunderland, scoring five goals, before Liverpool came calling for his services in the summer of 2011.

Mostly deployed on the right flank by Kenny Dalglish, Henderson’s debut season with the Reds included two appearances in finals and a League Cup winner’s medal.

He was, however, offered a move away from Anfield following the appointment of Brendan Rodgers in 2012 – a scenario Jordan immediately dismissed out of hand.

There was no question in the No.14’s mind: he would stay and fight for his place.

Within two years he was appointed vice-captain to Steven Gerrard. Twelve months later, he ascended to take on the armband permanently.

In between times, when Rodgers guided Liverpool to an unlikely, thrilling Premier League title charge in 2013-14, Jordan delivered an outstanding personal campaign – both despite, and as a result of, a huge challenge for the Henderson family.

“I didn’t see Jordan for the year,” explains Brian, who was diagnosed with cancer in 2013. “I spoke to him quite a bit and I said to him, ‘Look, I don’t really want to see you but what I would like you to do to cheer me up is just get as many Man of the Match [awards] as you can.’

“I remember, from saying that I think his first game was that Spurs game where I don’t know if he scored or scored twice, but I think he got Man of the Match, I’m not sure.

“From then on, if I went through the games – because I used to watch every game in the hospital bed, or if I was at home – if you check through, he got a few Man of the Match [awards], he did well. Got us through it.

“And thank the Lord, I’m here – walking and talking and breathing at the same time.”

And witnessing his son make history with the Reds.

After adding the UEFA Super Cup and FIFA Club World Cup to their Champions League win in 2019, Henderson and co fulfilled Brian’s mid-hug prediction in Madrid by clinching the Premier League title at the next opportunity.

The midfielder was a talismanic figure as Klopp’s side marched to the club’s first championship for 30 years – guiding, inspiring and propelling his teammates to glory attained with a massive haul of 99 points.

The Hendersons were unable to recreate their touchline embrace when Liverpool were confirmed league winners, but Brian’s pride was once again overwhelming.

“I said, ‘But Jordan will want to go and do this every year.’ And if he does, happy days. But as a parent, you cannot get any better than that, can you? I was really pleased.”

Henderson’s on-pitch leadership has been mirrored by his commitment to supporting the community, particularly in response to the challenges of the COVID-19 pandemic.

The England international’s backing for important causes has included providing help to foodbanks, becoming an ambassador for the NHS and, recently, using his social media platforms to raise awareness of online abuse.

“I’m probably more proud of the way he’s turned out to be a dad and a human being than he is a footballer, because he is a top, top guy,” says Brian. “And I think most people that you speak to will say that.”