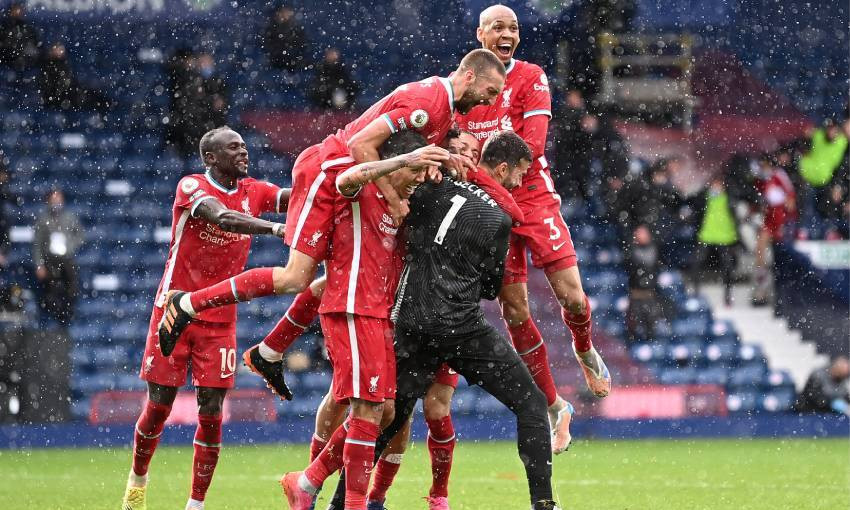 Alisson Becker scored a 95th-minute header to rescue a sensational 2-1 win for Liverpool against West Bromwich Albion on Sunday.

Hal Robson-Kanu’s precise finish gave the Baggies a breakthrough but the Reds were level by half-time in the Premier League contest courtesy of a clinical Mohamed Salah curler from 20 yards.

Jürgen Klopp’s side hit the woodwork, and both teams saw goals ruled out for offside, with the game seemingly destined to end in a draw.

But from Liverpool’s very last opportunity, Alisson went up for a corner and met Trent Alexander-Arnold’s delivery with a magnificently accurate header into the net.

The result means the Reds moved to within one point of Chelsea and three of Leicester City in the race for Champions League qualification, with two fixtures remaining.

It was confirmed ahead of kick-off by the manager that the latter is set to be sidelined for the remainder of the season due to a foot injury sustained against Manchester United.

Roberto Firmino was named captain at The Hawthorns. 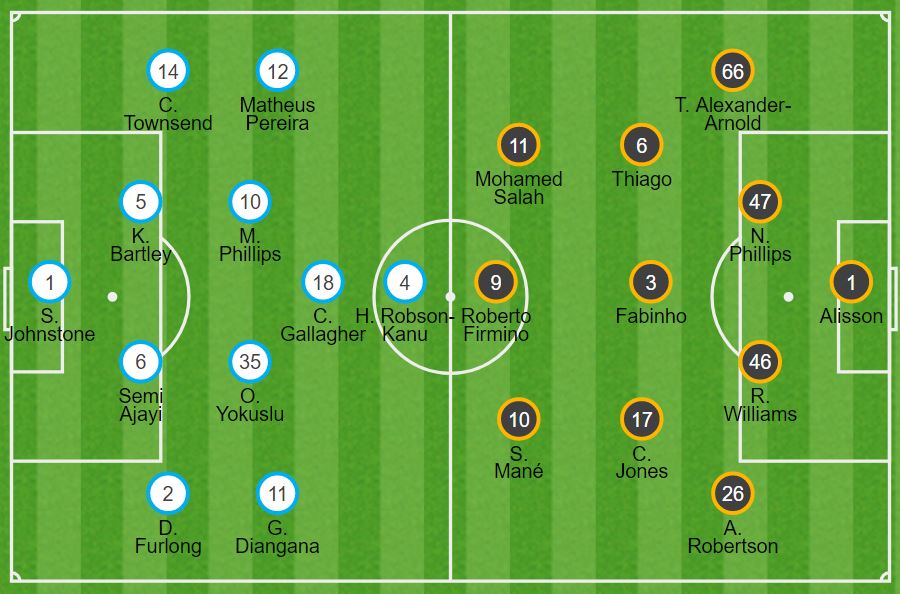 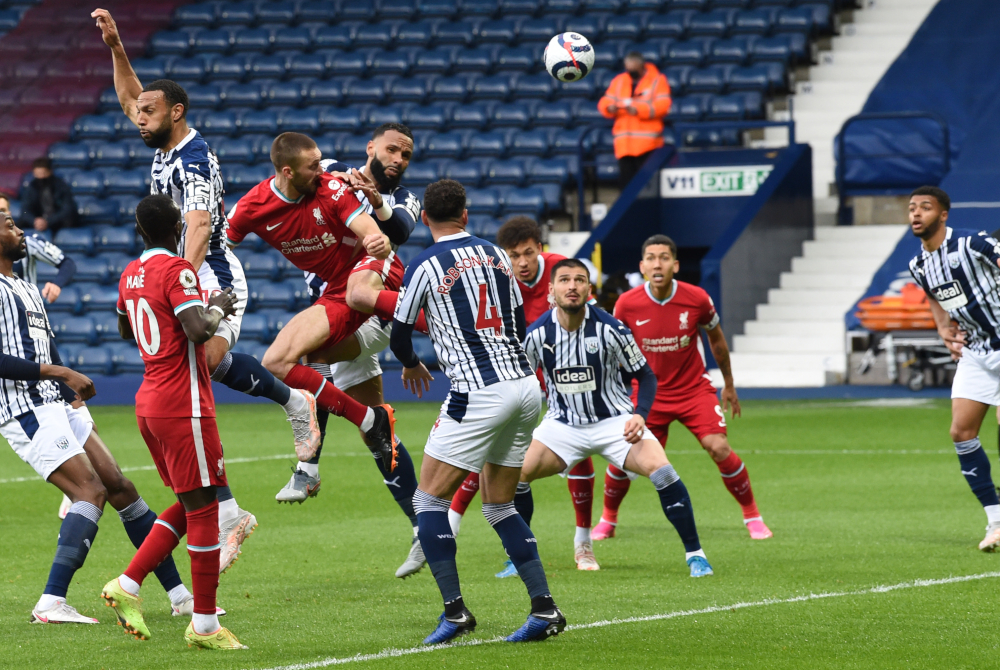 West Brom had settled into a rhythm, though, and unlocked the Liverpool defence on the quarter-hour.

Matheus Pereira released Robson-Kanu in behind with space to attack and the striker capitalised fully, opening up his body to shape a left-footed finish outside the reach of Alisson but inside the left post.

Klopp’s men pinned their opponents back in the aftermath of the goal and fashioned a big opportunity to level with a slick exchange of passes on 24 minutes.

Thiago fed Alexander-Arnold and ran on into the box as Fabinho took possession and slipped him a through ball. Thiago squared to the unmarked Mane, whose low hit aiming inside the near post went the wrong side.

Salah then had a glimpse of goal, picked out by Alexander-Arnold’s excellent chipped pass from left to right, but could only prod too close to Sam Johnstone from a narrow angle.

The Egyptian did not have to wait much longer for goal No.31 of the season, though.

Liverpool pressured the Baggies into surrendering the ball just outside their area and Mane’s touch rolled to Salah, who dispatched a perfect first-time shot into the bottom left corner. 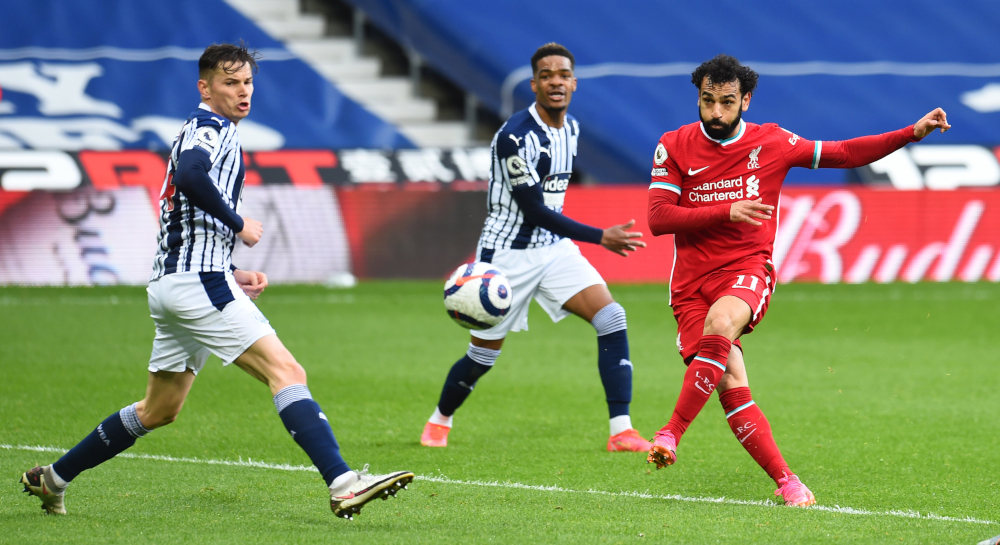 This time, Mane’s attempted backheel into the box deflected kindly into the path of Firmino and the Brazilian swept an effort on the turn at goal – and saw it clatter the left post and bounce away.

Still, within a minute the Reds required an excellent piece of defending from Alexander-Arnold to keep it 1-1, the full-back covering across to block away Robson-Kanu after a knock over the top evaded Phillips.

Liverpool returned with intent and had the ball in the net, albeit from an offside position, three minutes after the restart.

Mane prodded home from yards out when Salah scooped a cross from the right edge of the Baggies box to the far post, but the Senegalese had strayed just too far.

Next, Salah fired into the palms of Johnstone at the end of a two-on-one counter-attack led by Alexander-Arnold, before Klopp sent on Xherdan Shaqiri – in place of Jones – for the final half-hour.

The Reds were making all the running, Firmino seeing a decent attempt deflected away, but West Brom were standing firm and briefly thought they had got ahead again.

Semi Ajayi met a right-wing corner with a touch that was turned over the goalline by central defensive partner Kyle Bartley – but offside was given against Matt Phillips for obstructing Alisson’s view.

Back came Liverpool and a raking pass by Thiago invited Robertson to attack the box and thread in a low delivery that was snuffed out by Ajayi on the stretch.

They then needed a vital reaction from Alisson to best Robson-Kanu one-on-one when the Wales international collected a knock over the top and bore down on goal.

As time ticked away, Firmino threaded a pass through to the run off the flank of Alexander-Arnold, who stepped inside Phillips onto his left foot but lifted the shot high over the crossbar.

Johnstone batted away a well-struck Thiago attempt from 20 yards and Wijnaldum side-footed off target as the full-time whistle, and frustration for the Reds, loomed.

But with 95 minutes on the clock, Alisson was sent up for a corner kick and, picked out by Alexander-Arnold, directed a sublime, potentially crucial, header beyond his opposite number.