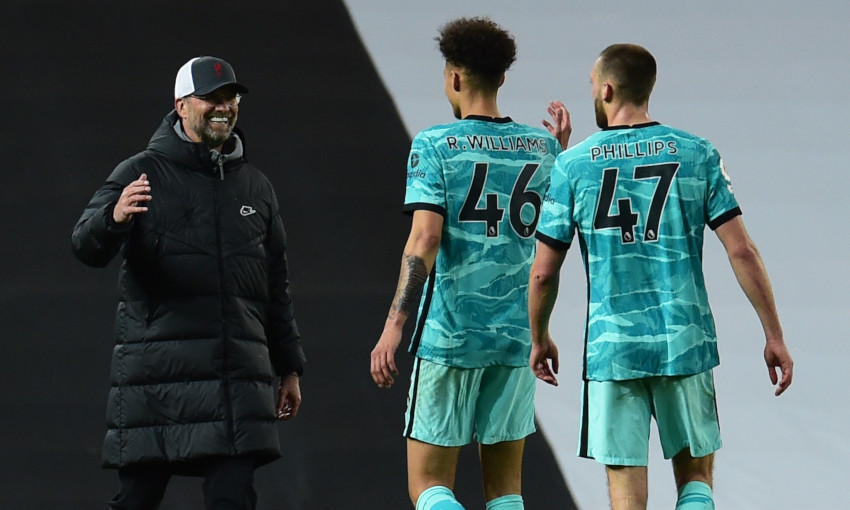 Jürgen Klopp has reiterated his appreciation for Nathaniel Phillips and Rhys Williams' contributions to Liverpool's season and backed the pair to enjoy 'proper careers' as a result.

Phillips and Williams have played 17 and 16 times respectively this term, stepping up whenever called upon as Joe Gomez, Joel Matip and Virgil van Dijk sustained long-term injuries.

They partnered in central defence on Thursday night as the Reds bolstered their Champions League qualification hopes with a 4-2 victory at Manchester United.

During his media previews for Sunday’s trip to West Bromwich Albion, the manager was asked how he will handle the possibility of the return of Gomez, Matip and Van Dijk in the next campaign leading to reduced game time for the likes of Phillips and Williams.

“First and foremost, the boys did incredibly well,” replied Klopp.

“Ozan [Kabak] came in and played a super part for us; unfortunately now [is] injured. Nat now for weeks already. Rhys in the start mainly in the Champions League because Nat was not on the list for the Champions League, then we had to figure that out – how we can do that, how we can make sure at least one of the two can play.

“Now they played together, did really well [on Thursday] night, I loved what they did. That’s good. So, this year created obviously two proper careers, which is nice.

“Both will have a proper career. When you are at an academy, at whichever club, that’s not written in stone. But now they could show how good they are, and so everything will be fine.

“Our new season will start in the summer, when we start with the pre-season. I said it before – it’s not sure that the three guys you mentioned before [Gomez, Matip and Van Dijk] will start the pre-season with us. So the boys will be here; we need the numbers of centre-halves, we need to work on all the different things.

“And then step by step we hopefully have the boys back, the other guys back. But football, team selection is based on performance and training and in pre-season in friendlies, or in proper competition games. And the door is always open. I don’t get blind overnight, that I don’t see a good performance anymore. That means, really, the door is open.

“But in general it’s just nice how the boys contribute. The concentration level they showed [on Thursday] night again is immense, absolutely insane what they did there. Against this front four of United it’s not easy.

“But it was really well supported, I have to say, by our two full-backs. They were really leading the line, a lot of talks. Rhys is a natural talker on the pitch, which helps as well. So I liked how we organised the last line, that was really good.”