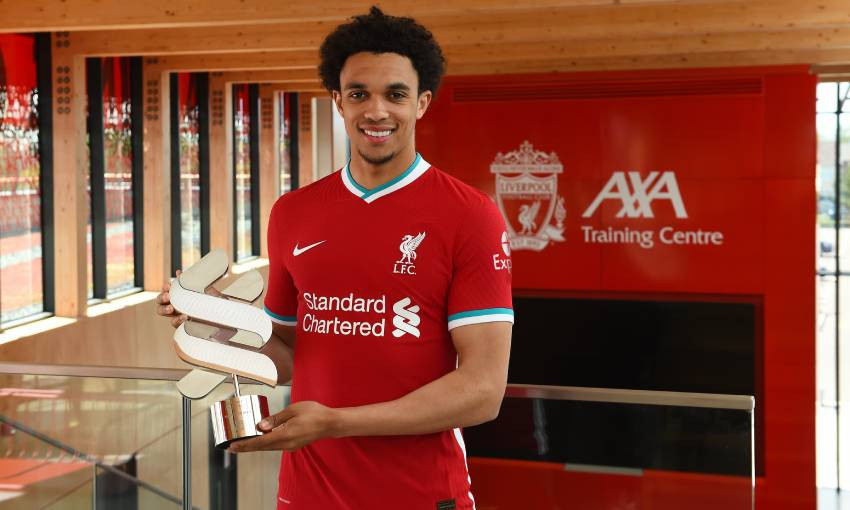 Trent Alexander-Arnold has been voted April's Standard Chartered Player of the Month by supporters.

The defender saw off competition from Mohamed Salah, who came a close second, and Thiago Alcantara to pick up the prize for the first time this season following a poll on Liverpoolfc.com.

Alexander-Arnold's highlight of the month came against Aston Villa, when he swept in a stoppage-time winner at Anfield to clinch a 2-1 victory for the Reds.

The No.66 also contributed assists against Arsenal and Leeds United away from home.

He was presented with the trophy at the AXA Training Centre earlier today and said: "I'm very pleased.

"I think I've had two assists and obviously a goal as well – normally it's probably a free-kick or somewhere on my side. So to be on the other side of the pitch and to score a goal like that in the fashion it was, it was a special moment. It was good to be able to get the three points in that game.

"It's been a decent month, we've had decent results. It could've been better but in the grand scheme of things it's been decent."

Describing his heroics versus Villa, the 22-year-old added: "I didn't realise it was that late on in the game. As I've been celebrating, I've looked up to the clock and saw it was so late.

"It was good to be able to do that and it was an important three points for us. We were able to get the three points and try to build from that. Like I said, the results have been fairly good this month."