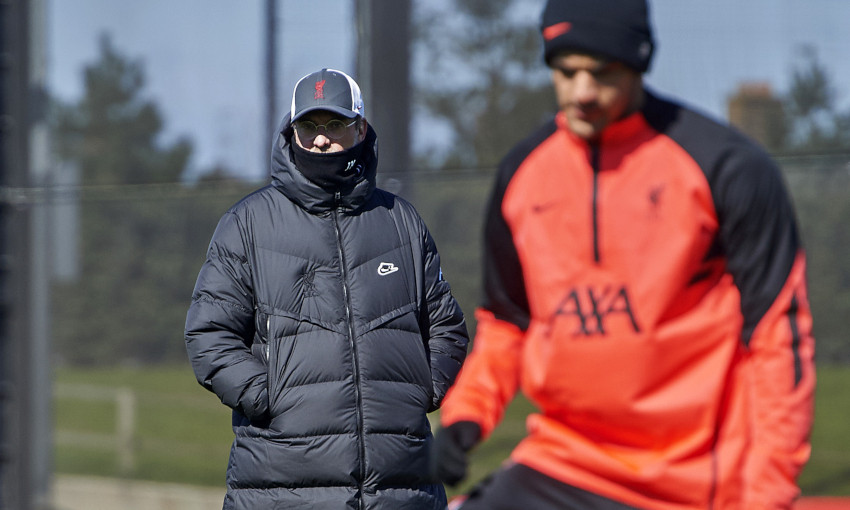 Jürgen Klopp is pleased by the increased squad options at his disposal as Liverpool prepare to tackle Real Madrid in the Champions League tonight.

The Reds head into the first leg of their quarter-final on the back of a 3-0 victory at Arsenal last Saturday that made it three consecutive wins and clean sheets.

“I tried to explain after the game, it was the first time for a long, long time that I can remember that I had much more players in a really good shape available than I can line up,” Klopp, who did not disclose any fresh injury concerns, told BT Sport ahead of the trip to Spain.

“And we used that and it worked out. That’s what we try to do again, of course – that we really use the squad more than we did in the past.”

Diogo Jota was introduced from the bench at Emirates Stadium to join forces with Roberto Firmino, Sadio Mane and Mohamed Salah in attack.

Liverpool netted twice during the 17-minute period the quartet were deployed together, through Jota and Salah, and Klopp was asked at his pre-match press conference if he is considering using them all against Real.

“You have to wait until the first whistle,” replied the boss. “Did Zinedine [Zidane] say anything about the line-up in the press conference?

“We will see what we do with that. But it looked good, hey? It looked really good. It looked good in the first half at least against Man City [earlier in the season] as well, I liked it a lot.

“There will be a moment when we give it a try. Is it [tonight]? We will see.”

Alex Oxlade-Chamberlain could reach the landmark of 100 appearances for the club in all competitions if he plays against the 13-times European Cup winners.

James Milner and Georginio Wijnaldum would be suspended for the return fixture at Anfield next Wednesday if they pick up a yellow card in Madrid.

Real, meanwhile, initially named a 21-man squad for the first leg, which will be played at Estadio Alfredo Di Stefano.

On Tuesday afternoon, however, it was announced Raphael Varane has received a positive COVID-19 test result.

Los Blancos are boosted by the return of Federico Valverde after a hamstring injury, but Dani Carvajal and Eden Hazard are unavailable.

Their captain, Sergio Ramos, is set to miss both games in the tie after he suffered a calf muscle injury during the recent international break.

The last-eight clash is a rematch of the 2018 final, when Zidane guided Real to a 3-1 victory over the Reds in Kiev to win a third consecutive European Cup.

Asked about Liverpool at his pre-match press conference, the Frenchman, now in his second spell as coach, said: “I believe they are a full team, quite complete.

“They are a very strong, very solid team and when they play as a team they are very good, so I would say it is the team as a whole, there’s not a specific point. We’ll see.

“It could be, of course, the three attackers we know, because they are very effective players and we are going to have to pay attention to everything.”