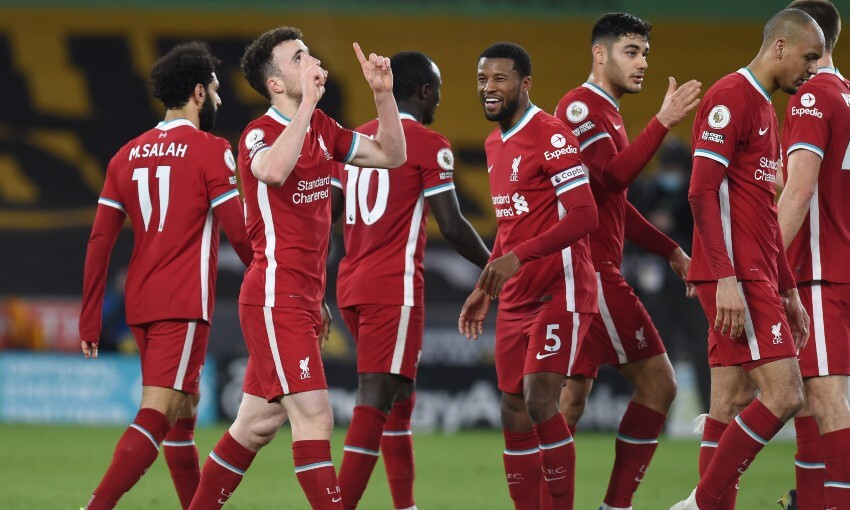 Diogo Jota enjoyed a successful return to his former club when he scored to give Liverpool a 1-0 victory at Wolverhampton Wanderers on Monday night.

The No.20 netted his 10th goal for the Reds in first-half stoppage time at Molineux to ensure Jürgen Klopp's men returned to winning ways in the Premier League.

Jota – who completed a switch to Merseyside from Wolves in September – put the finishing touches on a counter-attacking move, angling an effort into the bottom left corner of the net.

There was a lengthy stoppage towards the end of the 90 minutes as Wolves goalkeeper Rui Patricio suffered an injury that required him to be stretchered off.

Klopp elected to stick with the starting XI that beat RB Leipzig 2-0 to secure a spot in the Champions League quarter-finals.

Wolves started the contest well and called Alisson Becker into action after five minutes. The goalkeeper got down low to keep out a powerful strike from the overlapping Nelson Semedo.

Liverpool's first opportunity arrived in the 12th minute when Georginio Wijnaldum played the lively Sadio Mane through on goal.

Mane opted to take the ball around Patricio in the Wolves goal but knocked it too far and saw his eventual shot blocked.

The speedster was involved again as his cutback searching for Mohamed Salah in the six-yard box drew a vital intervention from Willy Boly.

For the Reds' next opportunity in the half, Mane headed wide from inside the penalty area after Trent Alexander-Arnold's clip found the No.10 free from the guard of Wolves' defenders. 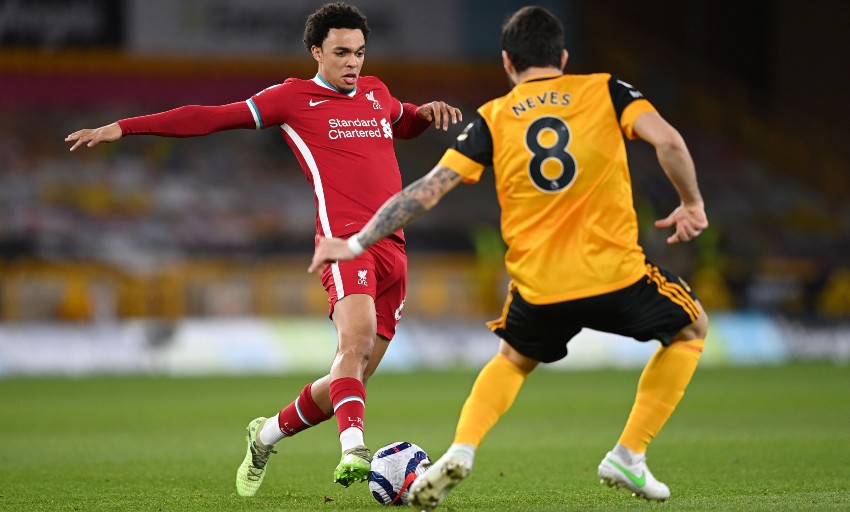 But there was to be action in both boxes right before the break. Ruben Neves fired agonisingly wide – and Wolves were made to rue that missed chance when Liverpool launched a breakaway.

Salah fed the ball to Mane, who then quickly shifted it on to Jota on the left. The Portugal forward proceeded to thrash a first-time low effort that beat his former teammate Patricio at the near post, giving the Reds the lead.

There was a let-off for Liverpool early on after the 15-minute pause, with Conor Coady heading high and wide from Romain Saiss' inswinging cross.

The visitors then made a double change in midfield, withdrawing Wijnaldum and Thiago Alcantara in place of James Milner and Naby Keita.

The two teams continued to trade blows, with Adama Traore and Mane unsuccessful with long-range strikes.

The open nature of the game continued. After Wolves substitute Fabio Silva headed straight at Alisson, Salah and Jota were then denied by smart saves from Patricio.

Alex Oxlade-Chamberlain came on for the remaining 10 minutes of the 90 and thought he'd delivered a match-clinching assist. Salah latched onto the midfielder's through ball and converted, only to see the assistant's flag raised for offside.

There was then the considerable pause after Patricio sustained his injury during the disallowed goal and was replaced by John Ruddy.

Salah went close to adding a second but Wolves responded, forcing Alisson into two saves. However, Jota's goal ultimately proved to be the difference when the referee blew the final whistle with 108 minutes played.