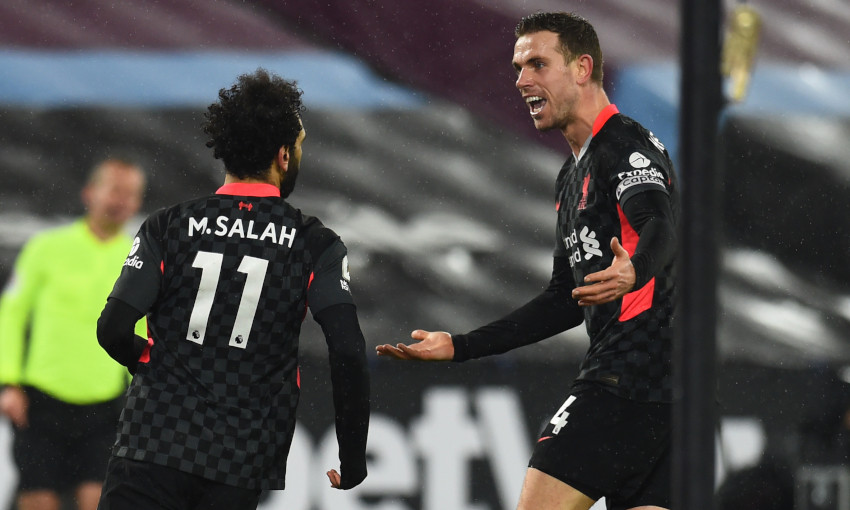 Liverpool rose to third in the Premier League table with a 3-1 win over West Ham United on Sunday afternoon.

After a goalless first half at London Stadium, a pair of clinical strikes from Mohamed Salah – which saw him hit the 20 mark for the fourth season in a row – set the Reds on course for victory.

First, Salah found the far corner having created room for himself in the area, then he wonderfully finished off a blistering counter-attack involving Trent Alexander-Arnold and Xherdan Shaqiri.

Georginio Wijnaldum knocked in a third from Roberto Firmino’s assist as the final whistle neared, and the Hammers grabbed a consolation through Craig Dawson.

The result moved Jürgen Klopp’s side above Leicester City in the table, and reduced the gap to Manchester United to one point and Manchester City to four.

Liverpool made three changes on their second visit to the capital of the week, with Nathaniel Phillips replacing the injured Joel Matip in central defence.

Divock Origi and Shaqiri also came in for Sadio Mane – who was absent due to a minor muscle issue sustained at Tottenham Hotspur – and Firmino. 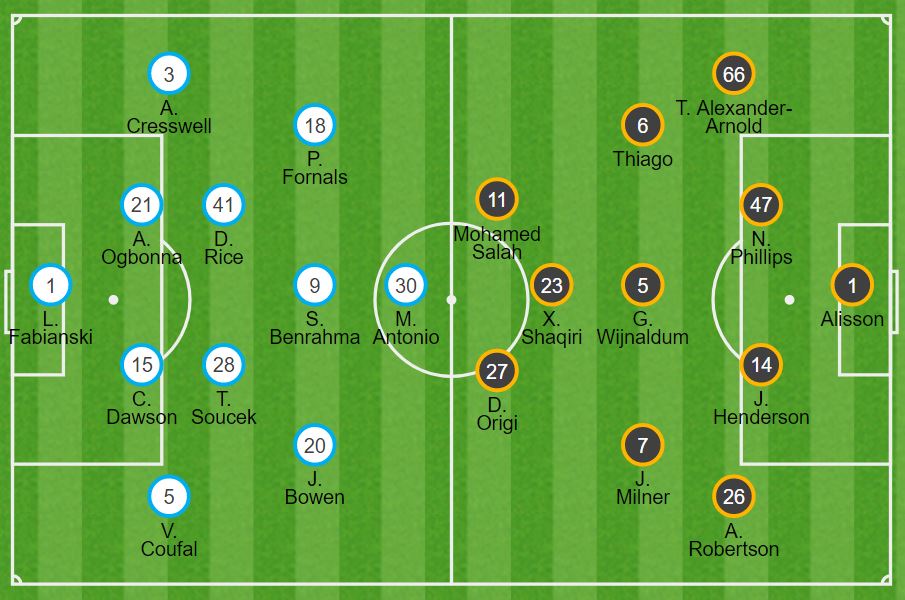 The Reds carried the confident approach they displayed throughout victory over Spurs into the opening stages of the action at London Stadium.

Indeed, Origi fired in the first warning shot as early as the fifth minute.

Shaqiri tucked a smart pass through the West Ham defence into the left channel of the penalty area and Origi quickly moved onto it, but thrashed his hit wide of the near post.

Wijnaldum soon drove a shot over the crossbar from around 25 yards, before Liverpool settled into a prolonged period of possession without concerning the Hammers goal.

The next real threat, instead, came from the hosts as an attack along their left flank resulted in the ball running to Pablo Fornals inside the box. But his effort was prevented from troubling Alisson Becker by a deflection off James Milner followed by a headed clearance by Andy Robertson.

It was a similar story for Shaqiri on 27 minutes.

After a lofted pass into the box for Salah’s run spun out to the Switzerland international, his whack at goal was crucially blocked by a lunging Dawson. 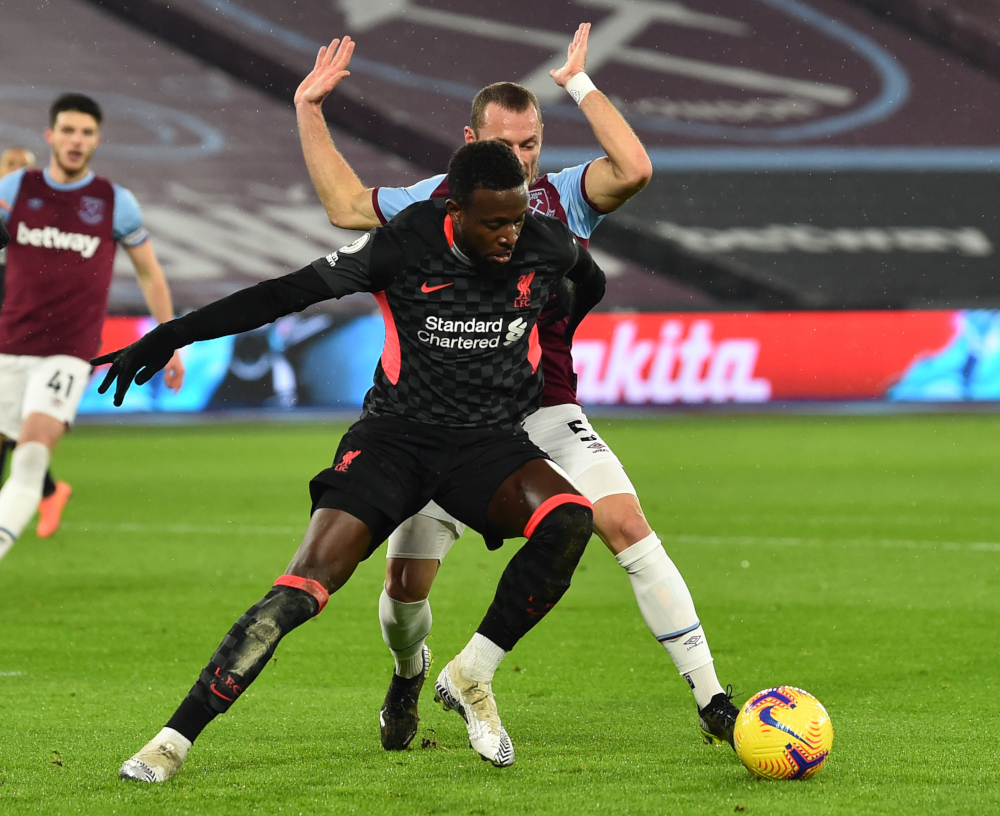 Another lull in chances ensued, though the half concluded with openings at either end – beginning with Michail Antonio nodding a back-post header straight at Alisson.

Thiago Alcantara then produced a wonderful low delivery from the left corner of the Hammers area, through a corridor of space that matched Origi’s run towards the near post, but the awkward angle made it too difficult for him to hook on target.

Salah blasted straight into Lukasz Fabianski’s gloves from 20 yards and the half-time whistle arrived with the contest still in stalemate.

A pivotal block denied Liverpool a breakthrough four minutes after the restart.

Origi’s direct running on the left-hand side created space for the striker to guide a cross into the middle for Salah, whose touch towards the net was halted by the boot of Aaron Cresswell.

Klopp’s men soon breathed a sigh of relief as West Ham worked the ball to Antonio with time and space to turn in the box – but his swerver whistled off target to the right.

Jones carried the ball through the centre to establish an opportunity and from his knock to Salah, the Egyptian’s deft footwork fashioned enough space for him to dispatch a clinical curler into the opposite corner.

On 68 minutes, Liverpool and Salah bettered that passage of play to double their advantage.

Robertson cleared a West Ham corner to launch a counter-attack of exhilarating precision as Alexander-Arnold’s crossfield pass from right to left was looped up and down, with a first-time touch, by Shaqiri into the waiting Salah.

The No.11 expertly cushioned the ball with his right foot and speedily angled it past Fabianski with his left to give a thrilling breakaway its ideal end. 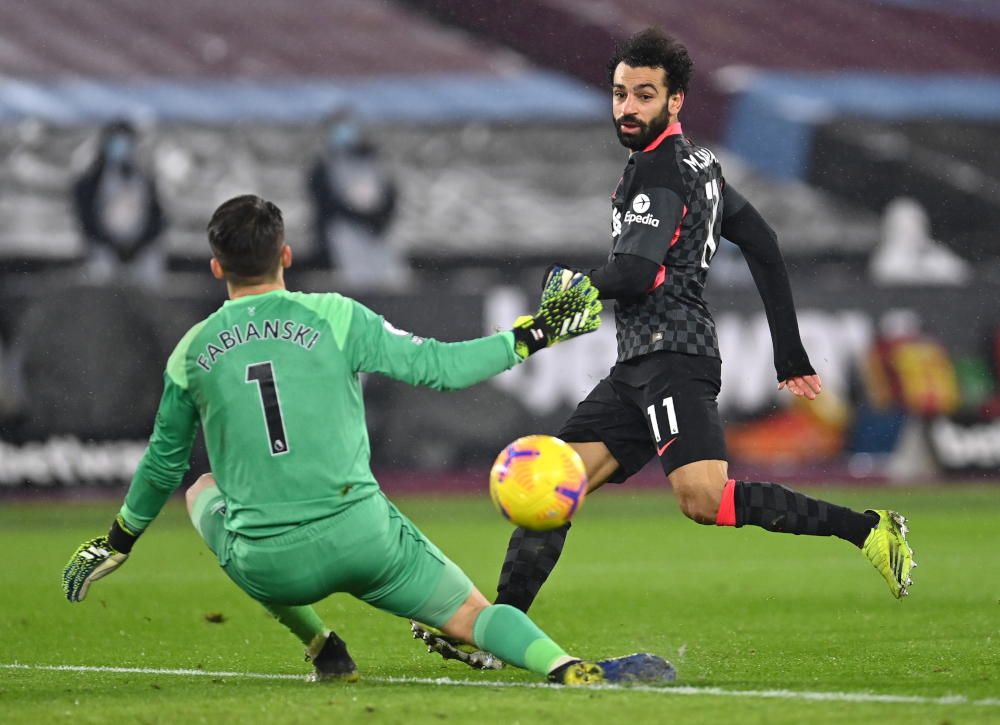 Substitutes Firmino and Alex Oxlade-Chamberlain combined to help Wijnaldum add a third for the visitors, with the former freed into the box to square for his teammate to convert.

Dawson quickly grabbed a consolation for the Hammers when he guided in from a corner into the box, but Liverpool’s second London win in three days was in the bag.