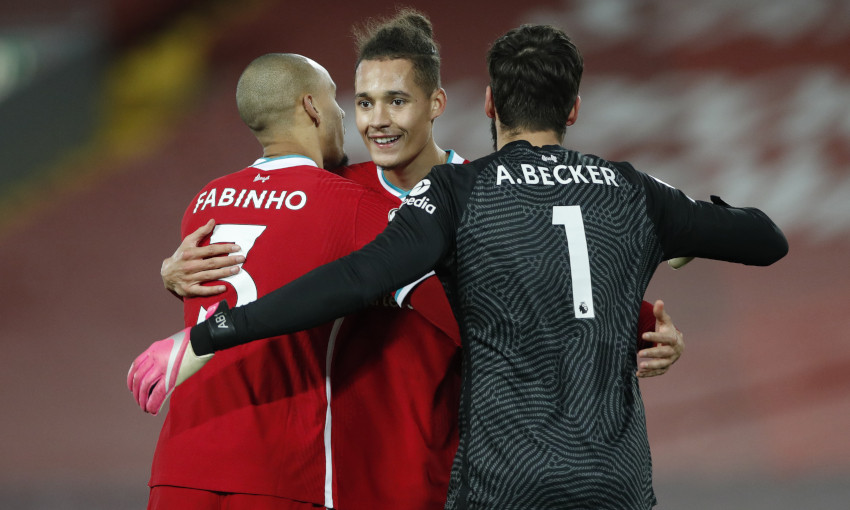 Trent Alexander-Arnold highlighted Rhys Williams for special praise after the 19-year-old made an impressive Premier League debut in Wednesday's defeat of Tottenham Hotspur.

After eight appearances in the Carabao Cup and Champions League earlier in the season, Williams made his bow in the top flight alongside Fabinho in central defence.

There could have been few trickier tasks for the No.46 on his landmark occasion as he and the rest of the Reds back four had to try to keep out Harry Kane, Son Heung-Min and co.

But Williams showed maturity and confidence beyond his years to aid Liverpool’s 2-1 victory, earning the acclaim of Jürgen Klopp, Jordan Henderson and now Alexander-Arnold.

“Especially Son and Kane, with the partnership they have shown they have got this season, it was always important for us to really try to shackle them,” Alexander-Arnold told Liverpoolfc.com.

“Shoutout to Rhys Williams on his Premier League debut – it has to happen because he has put in a world-class performance there, barely put a foot wrong against probably the best attacking duo in the league so far.

“Shoutout to him, it was a fantastic debut and one him and his friends and family can be really proud of.”

Further up the field, another Liverpool teenager again enhanced his burgeoning reputation as Curtis Jones put his stamp on a high-quality encounter at Anfield.

Named in Jürgen Klopp’s starting XI for the eighth time in the past 11 matches, the Scouser was a constant influence in the game and secured the Man of the Match award.

“For the last maybe year or so, the way he has developed as a player and as a person has been amazing to watch and see,” said Alexander-Arnold with a smile.

“I think what’s important for him now is to keep his feet on the floor and not get too excited with all the things that’ll be going on around him. It’ll be hectic but for him it’s about focusing on what he needs to do and keeping up the form he’s in.

“I think when we have a fully-fit squad, the manager will have a headache with him, I’m sure.”

The top-of-the-table clash with Spurs was enthralling from the off and the sides traded first-half goals as Mohamed Salah’s deflected hit was levelled clinically by Son.

Tottenham threatened to edge in front on several occasions during the second half, with Steven Bergwijn denied by a post, while Sadio Mane crashed a strike against the crossbar at the other end.

But it was Klopp’s men who landed the decisive blow.

Andy Robertson’s 90th-minute delivery from the left was thudded into the top corner by the head of Roberto Firmino to clinch three points and pole position in the Premier League.

“It was always going to be difficult to break them down but it was important for us to keep our heads, not get frustrated and stick to the game plan. That’s what we did,” assessed Alexander-Arnold.

“Obviously we would have liked it to be over with earlier but it went down to the wire. We’ve got match-winners like Bobby and other players in the team that have got us the three points.

“It was a massive three points for us. And to win it the way that we did was even more special.”