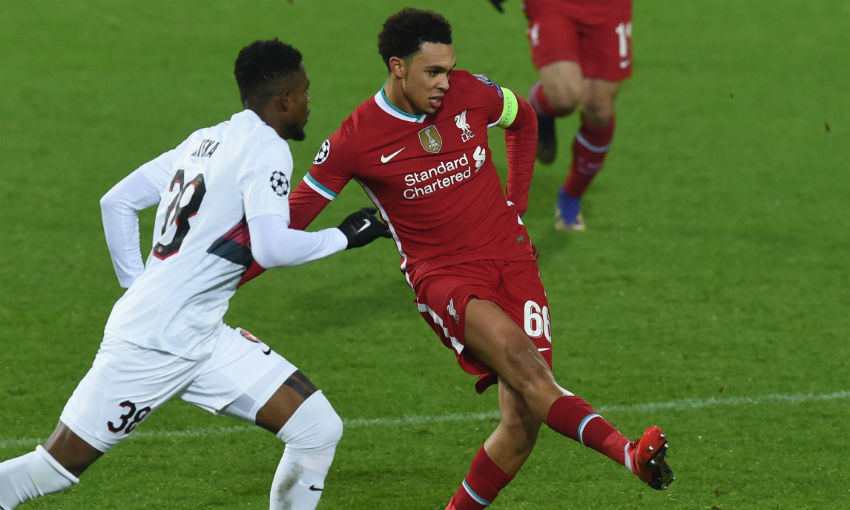 Trent Alexander-Arnold fulfilled another lifelong ambition when he captained Liverpool for the first time.

The 22-year-old started Wednesday's 1-1 Champions League draw away at FC Midtjylland as the Reds' skipper before passing the armband over to Jordan Henderson in minute 61.

It was a ‘special’ milestone for the Academy graduate and he expressed his gratitude for those that have helped him get to the point of captaining his boyhood club.

Read on for Liverpoolfc.com's chat with Alexander-Arnold following the encounter with Midtjylland...

For an hour you were Liverpool captain, how was it?

An extremely proud moment for me and the people who have helped me do that. You've obviously got to give thanks to the manager and the staff who chose me to captain the team tonight. It was a really proud night for me on a personal note. I think I'll look back on tonight with fond memories as being captain for the first time.

Was there any particular moment when it really hit home?

Obviously it's always been a dream, it's always special to play on Champions League nights. To lead the team out was incredibly proud, it was something that was different, new to me. It was special, it felt special out there.

Did you get a chance before the match to tell the family?

Yeah, I only told a few people, to be fair. I kept it quite close to my chest and didn't want to make it bigger than what it was. I tried to focus on the game as much as possible but I think the people that needed to know knew. It was a proud moment for the family.

On the game, do you feel you could've been a touch more clinical in the first half particularly?

Definitely. Looking back on it now, we had our chances, we had good chances. We took the lead really early on and could have capitalised on that, but we never and that's a tough lesson to learn. Looking back at it now, a point each is probably a fair result.

Sometimes we forget you're only 22 yourself, but there were a fair few even younger than you in that team tonight. Can you pass on anything to them as they make their first steps in this team?

Yeah, it's just really to be themselves. We see it every day in training [from] the lads that are there, we have so many young players now. It's refreshing to see. I think what they need to do is just focus on themselves, keep working, keep learning from the players that they're looking up to and who's playing in their position. I think the way that they performed was really well – I think Leighton, especially, playing his first Champions League game. He did really well out there. Billy out there when he came on did a job. So it was a good performance from the young lads and I think they'll be proud and I'm sure all their families will be proud of them as well.

Finally, you're into the draw for the last 16 as group winners. There'll be no easy draws, but the teams who finish as runners-up probably won't fancy getting Liverpool in the next round...

Yeah, now the fun begins really. The knockout stages, this is where the best teams perform and get through. It's important to do, it's never easy. You're not looking at it now and seeing any easy draws but it's exciting. I think on our day we'll be able to beat anyone.