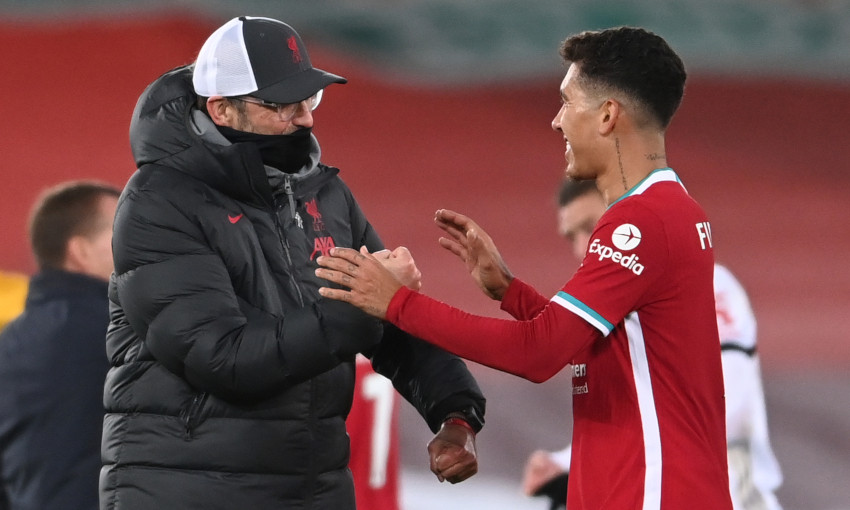 Jürgen Klopp reiterated Roberto Firmino's crucial role in his Liverpool team after the Brazilian returned to the scoresheet against Leicester City.

Firmino wrapped up the Reds’ emphatic 3-0 win over the Foxes on Sunday with a pinpoint header at the Kop end four minutes before full-time.

It was the No.9’s first strike at club level for around a month and prompted an extra special celebration with his delighted teammates.

Klopp was asked about Firmino at his pre-Atalanta BC press conference on Tuesday and detailed why the forward’s responsibilities in the Liverpool system go far beyond finding the net.

“Scoring was always important for Bobby but Bobby is the complete footballer,” the manager said.

“A football team is like an orchestra, to play we need to have people for different instruments. Some of them are louder, some of them are not that loud, but they are all important for the rhythm.

“I’m not concerned about anything with Bobby but I know from time to time it helps to score a goal. And this goal was very important.

“What I loved most about the goal is the reaction of the boys when you saw the celebration. We always celebrate goals obviously but the celebration of that goal was nearly emotional because obviously the players read newspapers, unfortunately, and they saw that there was some criticism. So they were really happy for him to score that goal and it felt absolutely just right that he scored it.