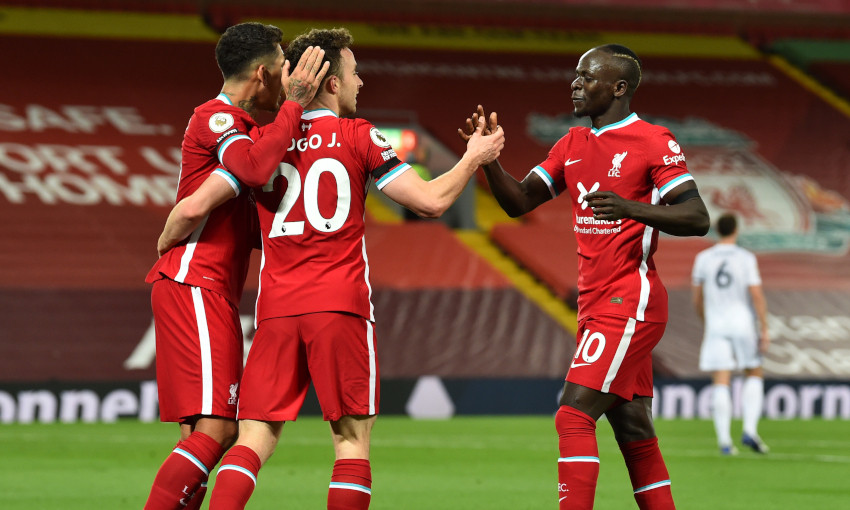 Liverpool moved level on points at the top of the Premier League table after a comprehensive 3-0 victory over Leicester City at Anfield on Sunday evening.

The Reds took a 21st-minute lead when Jonny Evans deflected a corner into his own goal from inside the six-yard box.

Diogo Jota furthered their advantage by steering in a header from Andy Robertson’s delivery across goal and into the corner just before the break.

Liverpool struck the woodwork three times after the interval as they looked to strengthen their grip on proceedings – and they did finally add to their tally when Roberto Firmino converted a header from a corner with five minutes remaining.

The result elevates the champions into second place in the standings, only behind Tottenham Hotspur on goal difference after nine matches.

Liverpool were able to recall Fabinho in defence after recovering from injury, but with no Trent Alexander-Arnold, James Milner was deployed at right-back.

Naby Keita was handed a role in midfield, while Georginio Wijnaldum notched his 200th appearance for the Reds. Academy graduate Leighton Clarkson was named on the bench, with Xherdan Shaqiri ruled out due to a fitness issue. 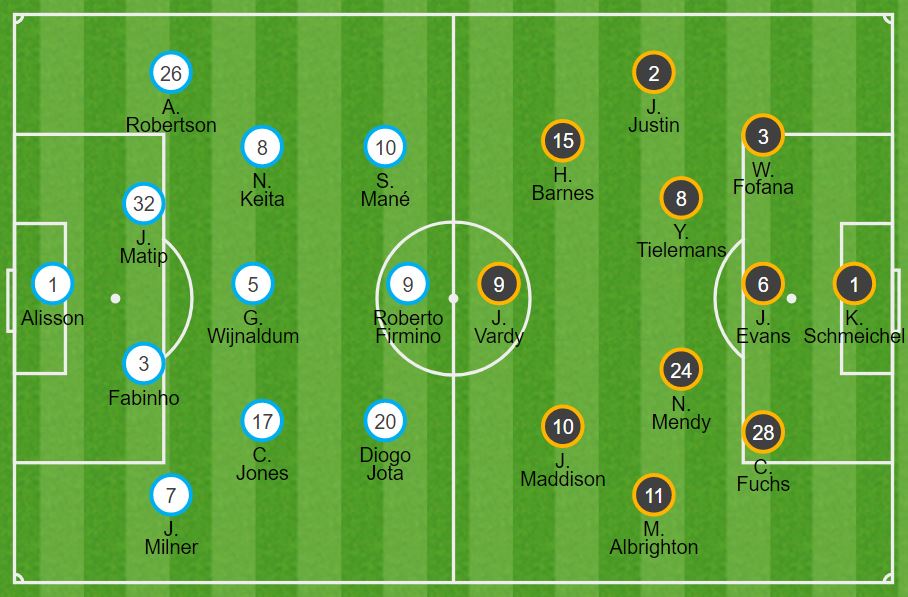 Liverpool honoured the memory of legendary goalkeeper Ray Clemence ahead of kick-off, with both sides taking part in a minute’s applause before play got under way.

Once it did, Sadio Mane almost gave the hosts an ideal start, but his glance goalwards from a corner rippled into the side-netting with 90 seconds elapsed.

Soon after, Curtis Jones was left clutching his head with his hands after his near-post drive following a Keita pass was thwarted by Kasper Schmeichel.

The Foxes’ ‘keeper was required to repel Jota’s blast from the edge of the area but could do little to prevent the Reds’ opener with 21 played.

Milner’s corner from the right was inadvertently headed into his own goal by Evans from close range, giving the home team the lead.

It was a strike of significance, too – it set new club record of scoring in 39 successive top-flight league games at Anfield. 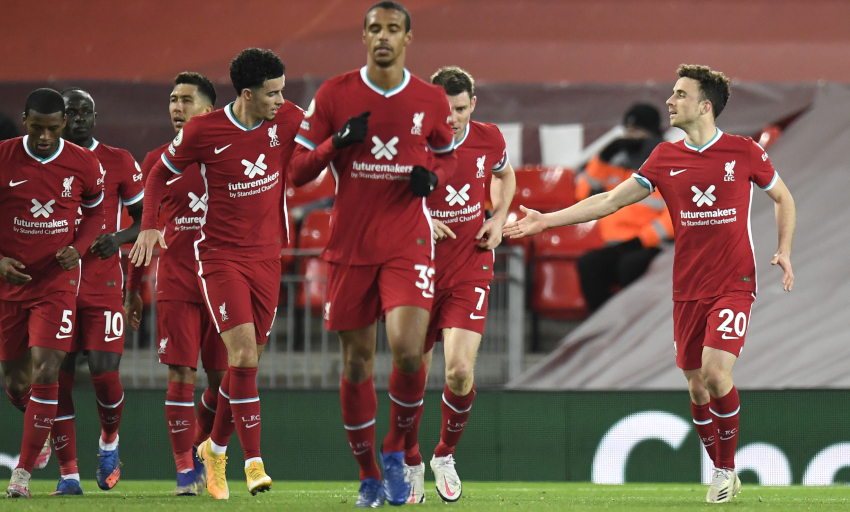 However, Leicester were inches away from an instant riposte, but Harvey Barnes sliced wide from Jamie Vardy’s pull-back.

Back at the other end, Joel Matip had Schmeichel worried with a header from another set-piece, though the ball ultimately spun the wrong side of the upright following Robertson’s delivery.

Then, just after the half-hour mark, Firmino was agonisingly close to prodding Matip’s header back across goal in as another dead-ball situation carved out an opening for Liverpool.

James Justin clipped narrowly wide as Leicester threatened, while Mane had a strike deflected into Schmeichel’s gloves after outmuscling Wesley Fofana to a ball forward.

Four minutes before the interval, the champions did go further in front. Jota met a Robertson cross with a dart towards the near post before glancing a header across goal and into the far corner at the conclusion of a 30-pass move.

It too was a milestone goal as the Portugal forward became the first player in the club’s history to strike in each of his first four top-flight appearances at home.

More importantly, it gave Jürgen Klopp’s side a sizeable advantage as the half concluded. 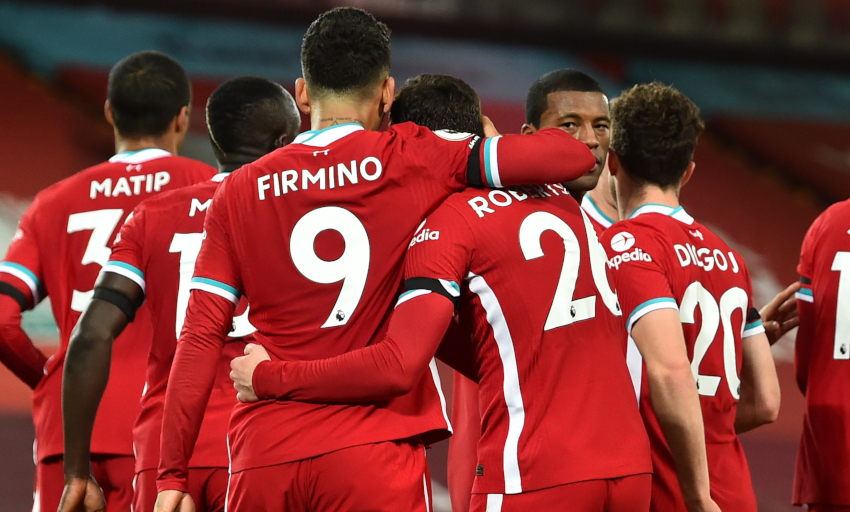 Jota almost picked up where he left off in the opening seconds following the restart, but his side-footer under pressure from Robertson’s cross cleared the bar.

Alisson Becker needed to keep out a drive from Barnes before Liverpool lost the services of Keita to injury in the 53rd minute, with Neco Williams dispatched from the bench to replace him.

They went excruciatingly close to adding a third almost immediately, however, when Mane raced through on goal but saw his attempted curler palmed away by Schmeichel and Christian Fuchs cleared the dropping ball from the line.

Liverpool went closer still when a quick-fire passage of play saw Schmeichel deny Jota and then Firmino before Evans headed the loose ball against his own post.

Leicester fashioned their best chance in the 61st minute when Vardy escaped into space to meet a free-kick, though he was denied by a sprawling save at his feet from Alisson.

Jota rolled wide of the near post following a slaloming run into the box as the game entered its final quarter before another manic verse of play saw Firmino rattle the post and have his follow-up cleared off the line before Mane’s drive from the rebound was pushed onto the other upright by Schmeichel.

The visiting custodian denied Mane once more but the third goal the hosts had been threatening finally arrived with five minutes left.

It was another Milner corner, with this time Firmino finding space and diverting a header into the corner to round off an excellent night’s work for Klopp’s men on which they set another club record of 64 home league games unbeaten.