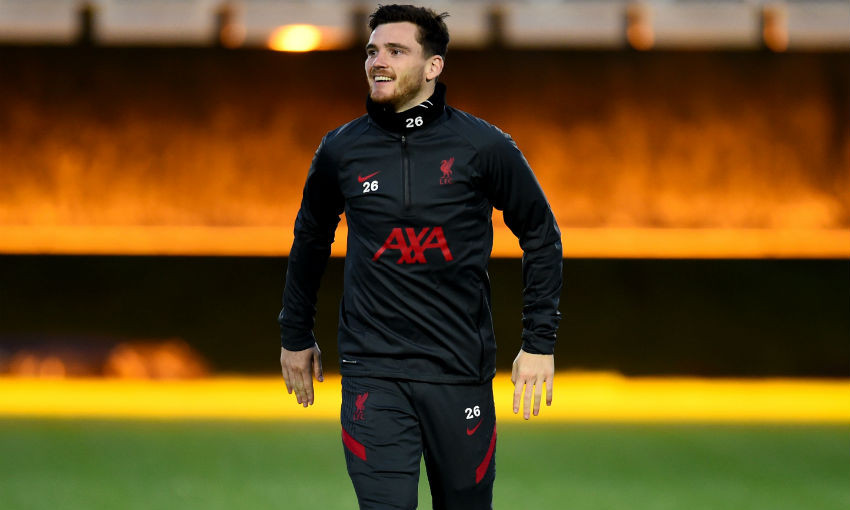 Given Liverpool's current situation, there's seemingly only one question to open an interview with Andy Robertson: 'How are you fitness-wise?'

Robertson missed the second of Scotland's three international fixtures during the break, though he did return to play 90 minutes against Israel on Wednesday.

It was a reassuring sign that the hamstring issue which kept him sidelined was only a minor one.

"Yeah, I feel fit, feel ready to go," the left-back told Liverpoolfc.com on Friday ahead of the Reds' encounter with Leicester City. "I think I just got a tighter hamstring than usual against Man City, first and foremost.

"Then obviously the game on Thursday for Scotland was a huge one and 120 minutes and penalties had took its toll on me.

"Sunday, I wasn't ready and just took a bit more time to recover from the game. But there wasn't any real concerns about it. It was just the [risk] of doing anything worse to the hamstring was quite high on Sunday and the manager had made the call not to play me. Wednesday, I was good to go.

"Now I'm ready to go for Sunday, I feel fully fit, I feel ready. I know some people were quite concerned but I suppose with the amount of injuries we've had, people have become used to it. But I'm fully fit and ready to go."

Liverpool's list of players unavailable for selection grew during the pause for international football.

It's another hurdle the reigning Premier League champions must overcome as Robertson detailed the no-excuse culture that runs deep throughout the club.

"Nothing changes," he stressed. "We let everyone else focus on reading the long list of injuries and things like that.

"We have a big squad, we have a squad full of quality, we've got a good few young players that have already made massive strides and are probably ready to make the next step.

"If you train with us and you play with us, we believe, the manager and the coaches believe that you're good enough to play for Liverpool and that doesn't change.

"Look, obviously I'm gutted for everyone that's injured, especially the long-term ones. But part of us just need to do them proud on the pitch and try to focus on our own game – and get the results that will maybe help keep a smile on their face when they're going through a tough time."

Joe Gomez's knee injury sustained while on England duty will see him miss a significant part of the rest of 2020-21, along with Virgil van Dijk.

Even speaking prior to the Gomez blow, Jürgen Klopp had in fact namechecked Robertson as a potential option for the Reds at centre-half.

The manager cited the career of Javier Mascherano, who retired this week, as proof that height isn't totally essential in the position.

Robertson reacted: "I don't think I've done it before but if the manager thinks that's an option, then I'll play it and do it to the best of my ability.

"Whatever the manager asks of me, I'll do it. Look, if that becomes an option or that becomes the case, like I said, I'll do it to the best of my ability and I'll try my best, like I do in any other position.

"The centre-backs have been hit hard – Joey and Virg long-term injuries, which is devastating, and Fab on his way back and things like that. Look, we've still got options there. If I'm one of them, so be it.

"All the lads here, we can all adapt to different positions and do our best in those positions.

"We might need to do that more this season because we've been hit with quite a few injuries and there's no saying that there might be more to come. But hopefully everyone now is fit and we're only adding to the squad instead of taking away.

"Hopefully there's a couple that are pretty close and hopefully in a couple of weeks our squad will be back to being a really strong one."

In encouraging news, Fabinho – a potential deputy at centre-back himself – has made a welcome return to team training in the build-up to the meeting with Leicester.

The Foxes head into the weekend top of the Premier League after eight matches, leaving Robertson fully aware of the stern test that awaits him and his teammates at Anfield on Sunday evening.

"Leicester are having a fantastic season. I've watched them a few times this season and there's just a difference about them," the No.26 said. "They just seem a wee bit more ruthless this season, a wee bit more stronger when it comes to certain games.

"I watched them against Arsenal and it looked as if it was a 0-0 draw written all over it and they find a way to win. That's the sign of a really good team and there's no hiding the fact that Leicester are a fantastic team.

"We know the task up against us, they've been the best so far this season by the league table and they're coming to Anfield.

"We'll probably need to put in a similar performance that we did against them on Boxing Day and try to be at our best because that was a pretty flawless performance and we'll need it again.

"No mistakes and then being ruthless in attack, so that's what we'll look to do. We know they'll come here and try to cause us problems and try to win the game because that's the type of team they are and we know we're in for a tough task. But we believe if we're at our best then we can beat anyone and hopefully that's the case on Sunday."