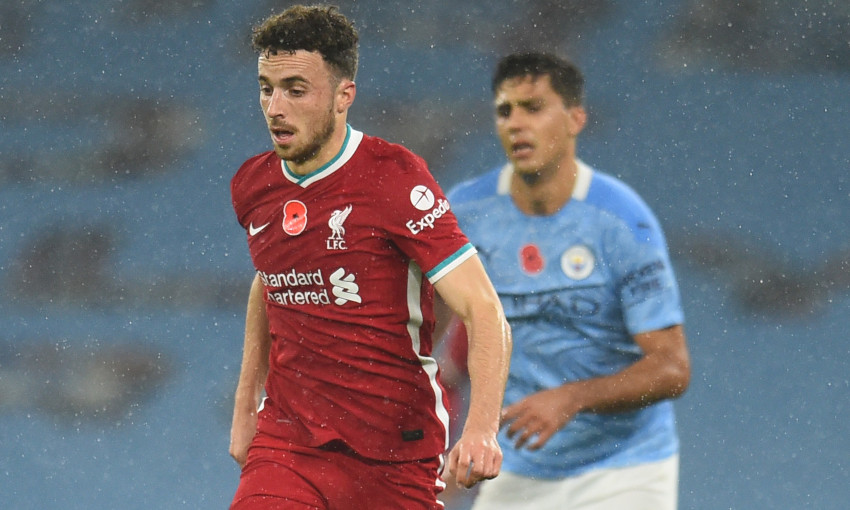 Liverpool and Manchester City took a point apiece from an evenly-matched 1-1 draw at Etihad Stadium on Sunday afternoon.

Mohamed Salah’s penalty was the Reds’ reward for an assured start and Gabriel Jesus then equalised 31 minutes into an absorbing Premier League clash.

The visitors were aggrieved by the decision to award City a spot-kick as half-time neared – Joe Gomez was penalised for handball – but Kevin De Bruyne pulled it off target.

And there were no additions to the scoresheet during a calmer second period in Manchester, meaning stalemate between last season’s top two.

Joel Matip made his return from injury, partnering Gomez in central defence, while the boss fielded all four of Roberto Firmino, Diogo Jota, Sadio Mane and Salah.

Nominal starting positions saw Firmino sit behind and alongside Salah as required, with Mane attacking from the left and Jota deployed on the right.

Remembrance Sunday reflections were observed before kick-off as the respective managers laid wreaths on the touchline and all in attendance paused to pay respects.

“If you want to get something here you have to be really brave,” Jürgen Klopp had noted ahead of the game – and his players certainly heeded those words.

A confident, front-foot beginning to the contest almost paid dividends inside a minute.

Trent Alexander-Arnold’s swerved forward pass in behind the City defence married with Firmino’s well-timed run and the latter found himself clear. But as the No.9 tried to move the ball around the outrushing Ederson, it bobbled awkwardly away.

Their breakthrough did arrive with 13 minutes on the clock, though.

From Andy Robertson’s angled pass into him, Mane nimbly spun into the space behind him and, as he darted towards goal, was fouled by Kyle Walker.

Salah stepped up to take the penalty and confidently planted it to his left, outside the reach of Ederson, for his 10th strike of the season in all competitions. 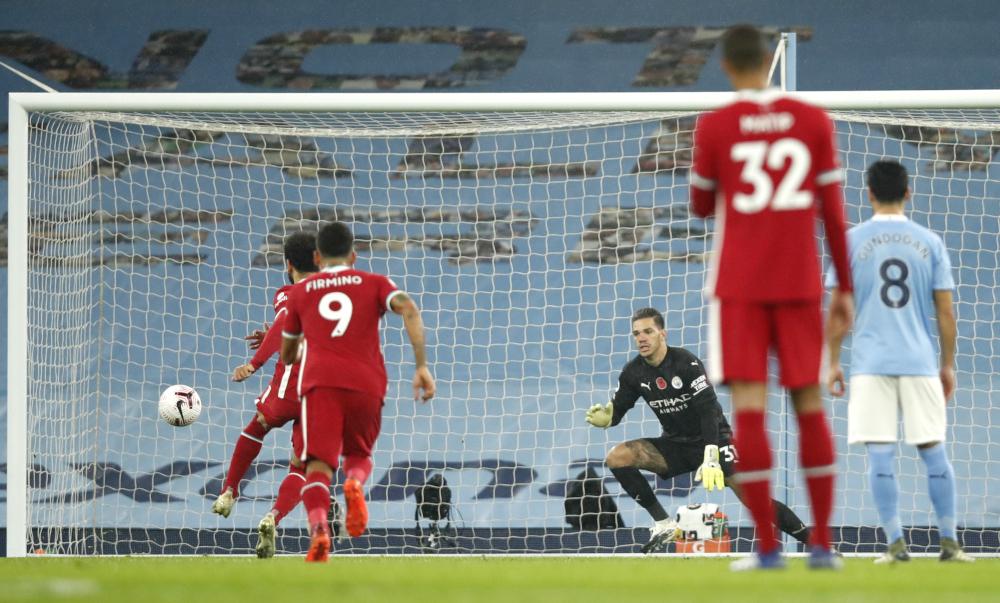 Liverpool were a repeated threat when they got the ball, yet were grateful to an important intervention by Alisson Becker midway through the half.

The hosts stole possession in Reds territory and De Bruyne swept in a right-to-left cross for Raheem Sterling at the back post. He controlled himself and picked his spot, but Alisson blocked with his legs and Matip cleared.

It proved to be brief relief for Klopp’s men, however.

De Bruyne found a pocket of space at the edge of the area and fed Jesus in the box, whose first touch took him past Alexander-Arnold and second was a clinical prodded finish beyond compatriot Alisson.

From the restart, De Bruyne thumped a low drive narrowly wide of the left post and soon the Belgian would have an even better opportunity to put City ahead.

His delivery from the right channel hit the arm of Gomez and, having conducted a review via VAR, referee Craig Pawson pointed to the spot. But De Bruyne dragged his penalty wide of the left post and it remained 1-1.

There was still time before the interval for Liverpool to threaten a second themselves; Salah’s reverse pass invited Alexander-Arnold to touch and shoot on the overlap, only for Ederson to block and scoop up the rebound before Jota could pounce. 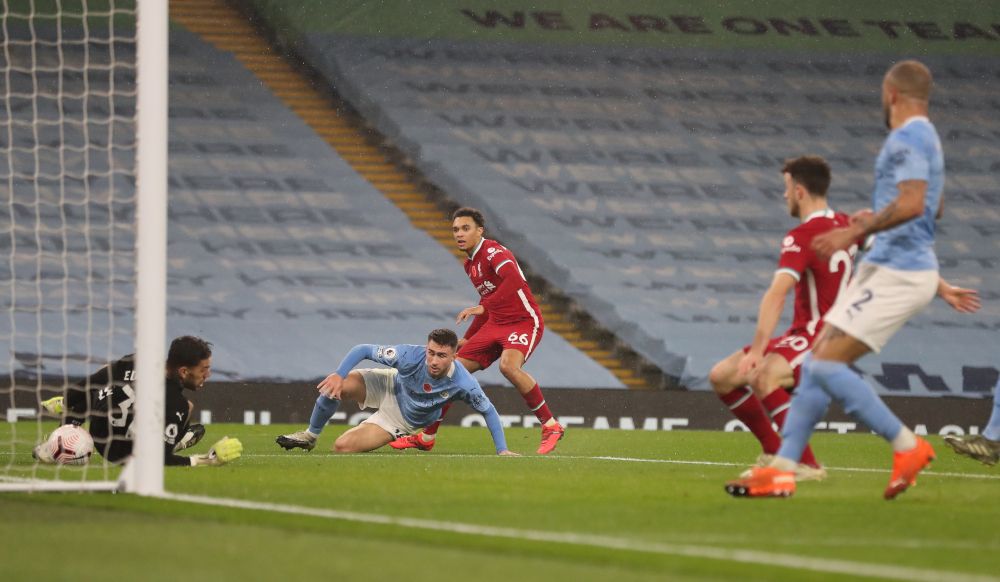 There was initially no let-up in the pace of the game when the action resumed and Jota was disappointed not to get more power on a shot from 12 yards, allowing Ederson to foil easily.

Ten minutes later at the other end, Jesus was picked out free in the box by Joao Cancelo, who had moved in off the left flank, but the striker’s header sailed wide of the near post.

De Bruyne lashed a long-ranger over the crossbar as Klopp introduced Xherdan Shaqiri for Firmino – and a second switch was soon forced upon the Reds boss.

Alexander-Arnold went down with an injury following a sprint and was unable to continue, with James Milner sent on at right-back against his former employers.

The zip of the first half had steadily dissipated as the second period progressed, with Liverpool finding it tougher to open up Pep Guardiola’s side and clear chances not forthcoming for either team.

And the status quo was unchanged when the final whistle was blown and called a pause to the Premier League for the November international break.