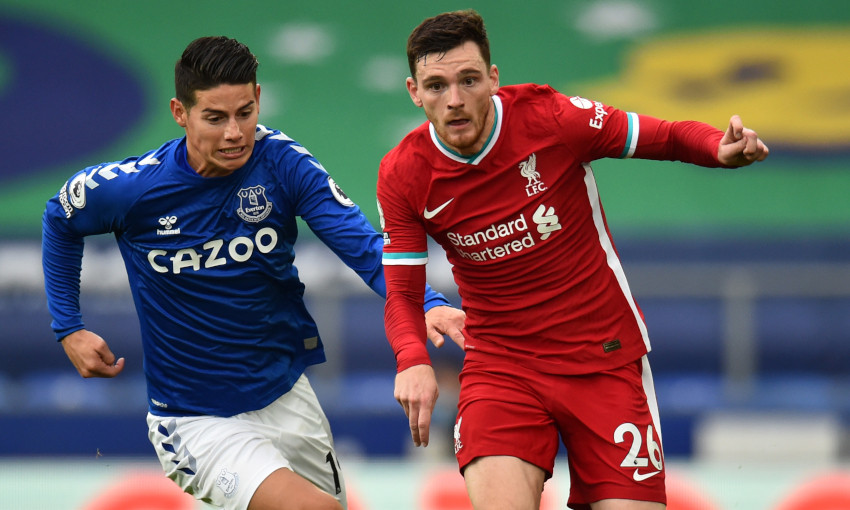 Liverpool departed Goodison Park disappointed by the final result but pleased with the level of their performance in the Merseyside derby, according to Andy Robertson.

In their first game since the heavy defeat at Aston Villa before the international break, the Reds led Everton twice – through Sadio Mane and Mohamed Salah – but were pegged back on each occasion by their neighbours.

A frantic clash that saw Richarlison hit the post and later receive a red card in the second half looked to have definitively swung in the visitors’ favour when Jordan Henderson forced in a stoppage-time finish.

But the effort was ruled out after a VAR review and Jürgen Klopp’s side had to settle for a 2-2 draw and a point from their short trip across Stanley Park.

“The game was there for us today, we created enough chances. We thought we had nicked it at the end and then I think Sadio’s toenail was maybe offside but that’s what VAR brings. Onside, offside, it’s clear, so unfortunately it doesn’t matter the margin, he’s offside.

“It’s always tough to take when you think you’ve won it and you are that close and things like that. But we take a point and we move on.

“I thought we were a lot better today. We were a lot better, we were more confident, we played our football, we pressed them, we were in their faces, we kept the ball really well and created chances. So, on another day we might have been further ahead before what happened, happened. We’ll take the draw and move on to the next game.”

Liverpool briefly celebrated what appeared to be a dramatic derby winner when Jordan Pickford was unable to stop Henderson’s low drive in added time.

The captain had completed a neat attack that involved precise passes from Thiago Alcantara and Mane, but the latter was ultimately judged to have been offside by the smallest of margins.

“I looked when Thiago played the ball and I thought [Sadio] could be or couldn’t be [offside],” reflected Robertson.

“But you’ve just scored the winner in the derby – we think – and you can’t not celebrate it. You then just wait for the decision and obviously the referee took a long time over it so we knew it was going to be a close one and usually when they take that long we know it’s sadly not going to go in our favour. Look, it is what it is and we move on from it.”

The Reds journeyed to Goodison Park to begin an intense period of fixtures that will include the commencement of the Champions League group stage next week.

On their the first opportunity to show a response to the 7-2 loss at Villa, Klopp declared the display against Everton “was the performance I wanted to see”.

And Robertson concurred there were improvements across the pitch that will stand the squad in good stead for the frequent challenges forthcoming.

“We need to take all the positives,” added the Scot.

“We looked as if we were going to create more chances, which we did, and we were probably ugly to play against. I think we lacked that against Villa – we didn’t win the counter-presses and we didn’t win the second balls. We won a lot more of them today.

“So, a lot of things [were] pleasing, but at the end of the day you come here for the result, which we never got, so we dust ourselves down, we’ve got a hectic period coming up, we’ll look forward to it and we’ll get our legs ready for Wednesday because the Champions League journey starts again and we want to go far in that competition so we need to get legs ready and then go back to Premier League business.