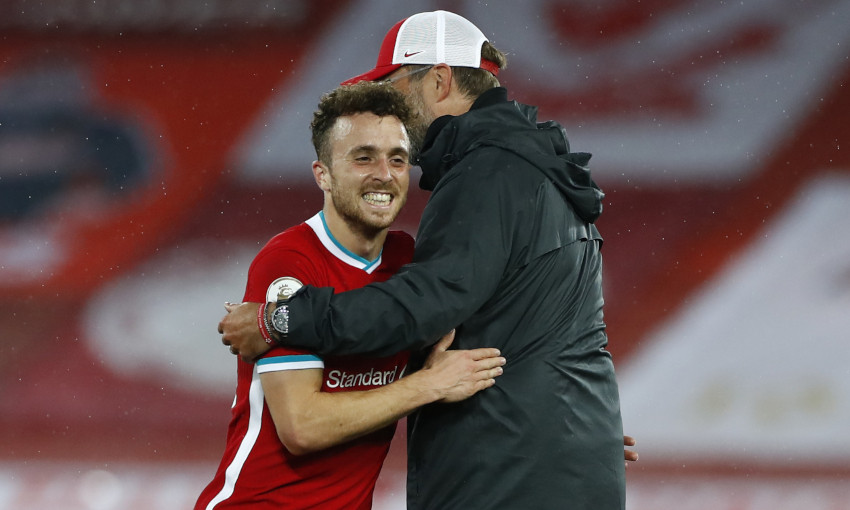 Diogo Jota treasured the moment of his first Liverpool goal.

The Portugal international made a home debut for the club on Monday night as the reigning champions defeated Arsenal 3-1 in the Premier League.

Jota needed only eight minutes after being introduced from the bench to open his Reds account, dispatching an accurate volley inside the left post from the edge of the area.

He was subsequently mobbed by his teammates in celebration of a landmark personal moment – and the securing of three points.

“It means a lot,” Jota told Liverpoolfc.com post-match of the reaction to his strike.

“When you arrive at a team that are world champions, you always try to adapt as quickly as possible. The way they received me is exceptional. I just thank them for the way they have received me. I think we can build up from here and do great things in the future.

“Obviously I could have done better, I had a couple of chances before. But I’m happy with this – getting my first goal in my first game [at Anfield].

“And I helped the team seal the result, that is the most important thing, that we got the three points.”

Jota replaced Sadio Mane in the 80th minute of a contest that remained unresolved despite Liverpool’s superiority for much of the game.

The hosts actually fell behind against the run of play in the first half as Andy Robertson’s miscued clearance was punished by Alexandre Lacazette.

But they rapidly overturned the scoreline through goals from Mane and Robertson at the other end on a night when Jürgen Klopp described his team’s play as ‘absolutely exceptional’.

Jota was watching and waiting on the bench, mentally preparing himself should an opportunity to influence the final result come his way.

Asked what the manager instructed him, the No.20 said: “Arsenal are playing really well with good momentum. So, he just told me to keep the pressing that we were doing very well in the match.

“And with the ball, just be happy, play my best – and that’s what I tried to do. I think in the end he was pleased with that.

“When we are on the bench we are watching the game closely, with attention. We know we could come on at any moment and we could have a chance to decide the game in the few moments that we are on. That’s what I try to do – always be focused.

“And when I’m on the pitch I’m always ready to do my best.”