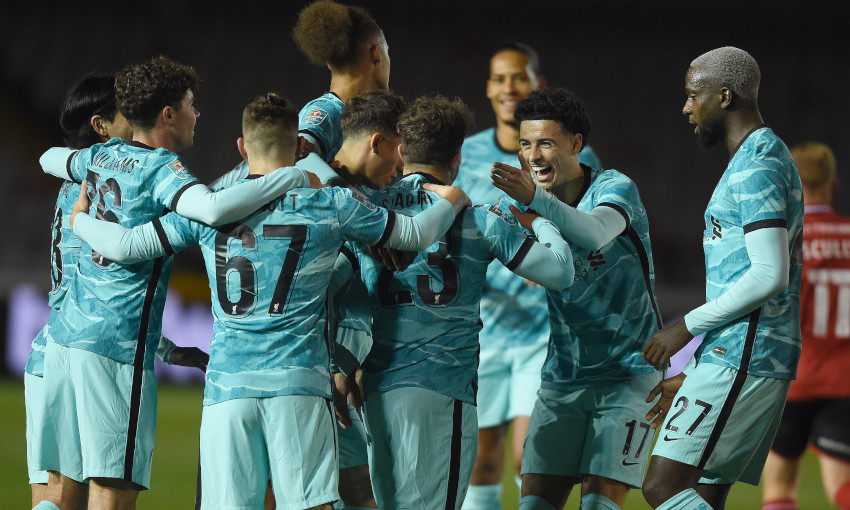 Liverpool powered into the fourth round of the Carabao Cup with a 7-2 victory over Lincoln City at the LNER Stadium on Thursday evening.

Xherdan Shaqiri opened the scoring after nine minutes, marking his first start since last December with a thumping free-kick from the right.

Takumi Minamino soon added the second against the League One side when he hammered a first-time curler into the top corner from the edge of the box.

Then, just after the half-hour, Curtis Jones found the same spot of netting as the previous two scorers when he whipped home from Divock Origi’s knockdown before bagging a second minutes later.

Minamino grabbed the fifth goal inside 18 seconds of the restart and Diogo Jota came off the bench to register his debut.

Marko Grujic drilled in a sixth; however, it came sandwiched between strikes from Tayo Edun and Lewis Montsma as The Imps reduced the arrears.

But Origi had the final say on the night with a clinical finish to tee up a fourth-round meeting with Arsenal at Anfield next week.

Kostas Tsimikas made his first competitive appearance for the club, while fellow new signing Jota was on the bench.

In the first competitive meeting between the clubs in more than 59 years, Liverpool set about dominating the game from the first whistle.

And their early pressure was duly rewarded with nine minutes elapsed when Shaqiri rasped a direct free-kick into the top corner of Alex Palmer’s goal from the right corner of the box.

Jones threatened a second shortly after when he pounced on Tsimikas’ ball into the area and clipped inches wide.

However, it was 2-0 on 18 minutes. This time it was Minamino on target, swirling an unerring first-time effort into the top corner from the edge of the area after the visitors had won the ball back high up the pitch from Montsma.

Lincoln threatened when James Jones found an opportunity to shoot across goal, but Adrian was able to palm to safety.

The Imps would cause concern again just before the half-hour as TJ Eyoma headed over from close range.

Nevertheless, the 32nd minute brought the champions’ third. Rhys Williams sprayed a ball cross-field into the area, where Origi knocked it down for Jones.

The No.17 pulled off some nimble footwork to shift into position to shoot before skimming beyond the reach of Palmer and into the top corner.

A mere matter of minutes later, Jones was at it once more. This time he spun into space on the edge of the area and arched the ball into the far corner in one fluid movement.

At the other end, Max Melbourne headed into the side-netting from Edun’s delivery from the right.

With the Reds 4-0 up at the break, Fabinho replaced Van Dijk during the interval – and four was five within a minute of the restart. 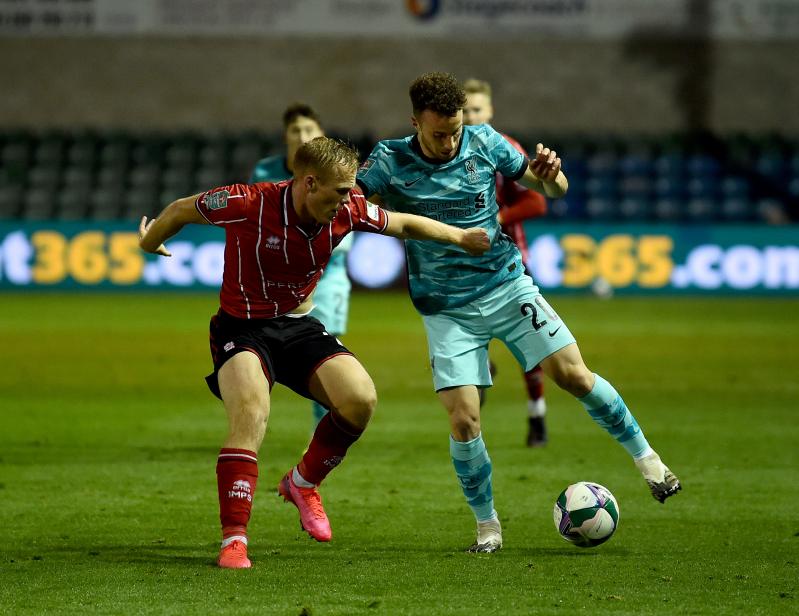 Harvey Elliott’s stab goalwards from Jones’ pass was saved by Palmer, but Minamino was on hand to prod the loose ball over the line for his second of the night.

The hosts could have reduced the arrears with a hat-trick of chances falling to Harry Anderson, Jones and Edun in the same passage of play, but they were foiled by a combination of Adrian and recovering defenders.

Jorge Grant then stung the palms of Liverpool’s goalkeeper with a drive from the left and Anthony Scully couldn’t nudge in from close quarters as the home team’s pressure continued.

Jota was introduced for Elliott shortly before the hour to make his Reds debut – and Lincoln did get on the scoresheet with Edun steering in from 12 yards.

Goals were then traded in quick succession as Grujic slotted beyond Palmer from the 18-yard line and Montsma crashed a header in off the crossbar for the home side at a corner.

Adrian had to make a smart reflex stop from Theo Archibald to prevent Lincoln from shortening the advantage of Jürgen Klopp’s men even further.

But as the contest ticked towards its conclusion, the champions broke at speed and Minamino played in Origi, who hammered into the far corner to wrap up the scoring.

Liverpool will now face Arsenal in the next round of the tournament at Anfield in the week commencing September 28.