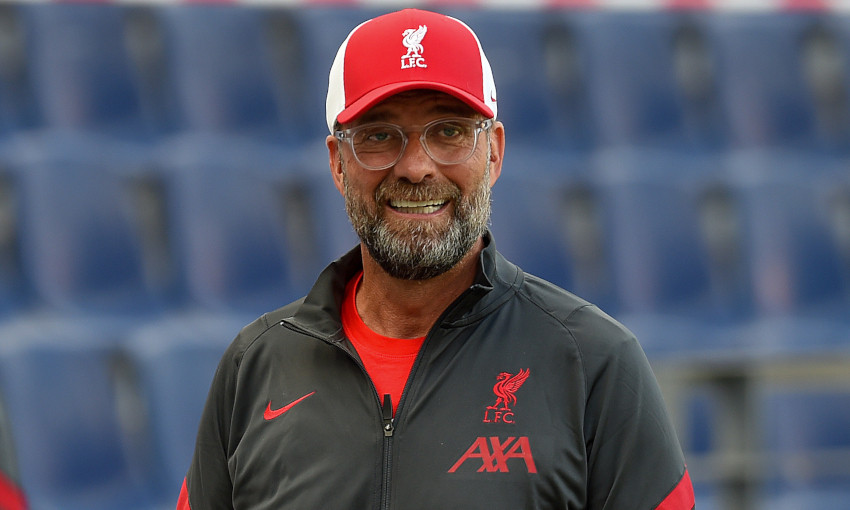 Jürgen Klopp was pleased with the response Liverpool displayed during Tuesday's 2-2 draw with Salzburg in a pre-season friendly.

The Reds were two goals behind after 13 minutes of play at the Red Bull Arena after Patson Daka's double.

But Rhian Brewster came off the bench just past the hour mark to net two clinical finishes that drew the contest level.

Klopp's side have now wrapped up their Austrian training camp and will next look to secure silverware on Saturday when they take on Arsenal at Wembley in the Community Shield.

Read on for the boss' post-Salzburg interview with Liverpoolfc.com...

On his thoughts about the game...

It obviously didn't look really good for big parts of the game, I have to admit that. I should or could have known because I know obviously what we did in training. We had a really good camp, the sessions looked really good, boys were sharp and now today it was obviously the day where we had heavy legs. Then we played too complicated, gave the wrong people in the wrong moment the wrong ball. I should have known as well because being on the way home, having a game – I don't think it ever worked for me in my whole career as a manager! I wanted to have problems today, not exactly the problems we had, but I wanted to have problems that we fight against. Then when the kids came on, when Millie was on, we didn't think about the problems we had. We just had to find a few solutions. We scored the two goals, super goals from Rhian. The second one was brilliant from him, the first one was brilliant set-up from Taki and Millie. We made it too easy for the two goals they scored, they were of course very easy and gave the game a direction – they were now confident and defended deep and stuff like this. It's normal. How I said, I didn't like the game too much but we can use it anyway.

On how impressed he's been with Brewster...

Rhian is a young boy and he knows that. He can learn a lot of things but he's a natural goalscorer – that's what he is. He has to be more involved in the game when he's on the pitch, but I have to say in the decisive moments he's 100 per cent there. I like that a lot and he's a wonderful kid, so that's all good. If you score three goals in two games, it's not a bad number and that's OK.

On the Austrian camp and Community Shield with Arsenal...

Four days until the first opportunity, so we have to use it for recovery. There is not a lot of input anymore in training now. All the things we did were there to prepare for the season and prepare for the first game. The pre-season actually ends in two-and-a-half weeks before the game against Leeds, but we will be as ready as possible for this game. We should play better than today and then I think we will have a chance; we will play better than today, so that's all good. Austria was really good, the hotel was brilliant and the organisation was perfect. We could do what we wanted and what we really had to do. What was really nice today was having supporters in the stadium; it was a new experience after a long, long time. It obviously makes a difference atmosphere-wise for a game and hopefully we can do something like this in England soon as well.