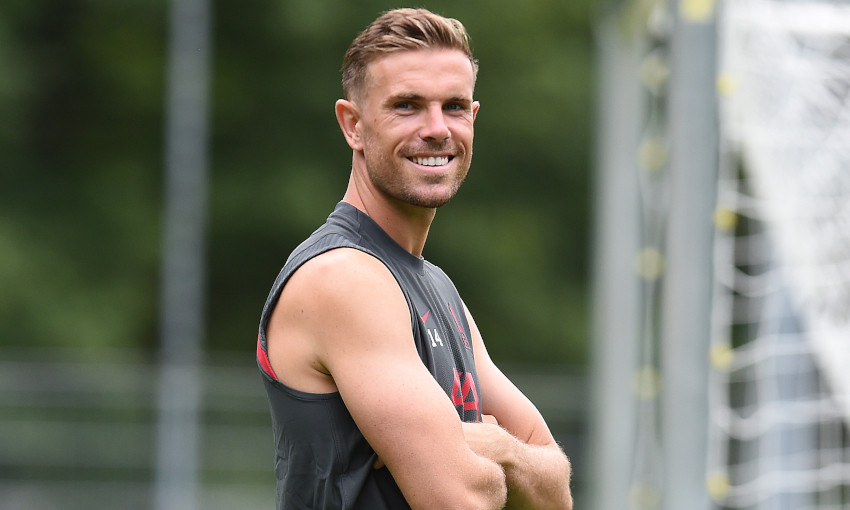 Inside Austria: Behind the scenes as Reds open 2020-21 with Stuttgart win

Talk of Liverpool's Premier League title win hasn't been on the agenda during pre-season, Jordan Henderson has revealed - with the Reds' focus now on the forthcoming 2020-21 campaign.

Jürgen Klopp's squad returned to Merseyside this week after reconvening for the first time since ending the club's 30-year wait for the championship at a training camp in Austria.

However, there's been no chatter among the players about being England's champions, the captain told Liverpoolfc.com, during an extended sit-down interview at the team hotel on the outskirts of Salzburg.

"To be honest, we haven't spoken about it," Henderson said. "It's more about, 'Have you enjoyed your holiday?' We've been cracking on, really working hard. New season, new start and a lot more things we want to go on and achieve.

"[I'm] really excited to see what we can do this season, another big season for us. Hopefully we can take confidence from the last year or two but we need to stay hungry and need to keep the desire to go and want more.

"I can certainly see that from the first days that I've watched training in pre-season."

Liverpool undertook double sessions most days in Austria to start preparations for the new season.

Henderson - who is continuing his rehabilitation from a knee injury - was impressed by what he has witnessed in training.

"You've got to look at the players in the squad and the manager as well, it's always about looking forward and wanting more and improving," continued the skipper.

"I think that's just natural to us now. We've always looked at the next game as we always see it as the biggest one and that 90 minutes we give everything to win.

"Pre-season is no different, you know you've got to train so hard to be ready for the first game of the season, which for us comes against Arsenal in the Community Shield – so a little bit earlier than everybody else.

"We've got to be right at it come that first game and we've got another chance to win silverware. After that, the Premier League starts pretty quick after that as well, so you need to be ready, as you do in every season. As I say, by the looks of it, we are."

Henderson is one of several members of the Liverpool squad to have been a fan of Netflix's hit series The Last Dance – the behind-the-scenes documentary about the Chicago Bulls' relentless success of the 1990s.

Each season carried a theme for the NBA side as they strode towards six championships in seven years.

So, what would Liverpool's theme be for the new season?

"To go again, to improve, to be better, to keep that desire, that hunger and that competitiveness as we've shown over the last few years," Henderson replied.

"Just to keep going and win as many trophies as we can because we've proven that over the last few years we're a top, top team. But that's all down to the hard work and dedication that's been over the whole season or the whole two, three, four years – however many years you want to go back – every single day in training was top level, 100 per cent.

"No matter whether you were playing, maybe playing every game or you hadn't played that much, training has always had a high level and we've got to keep that going forward.

"If we do that, we'll always have an opportunity to be more successful in the future."

Watch our extended interview with Jordan Henderson on LFCTV GO. Use code 2021GOFREE to start a free one-month trial of LFCTV GO now - this can be cancelled at any time.