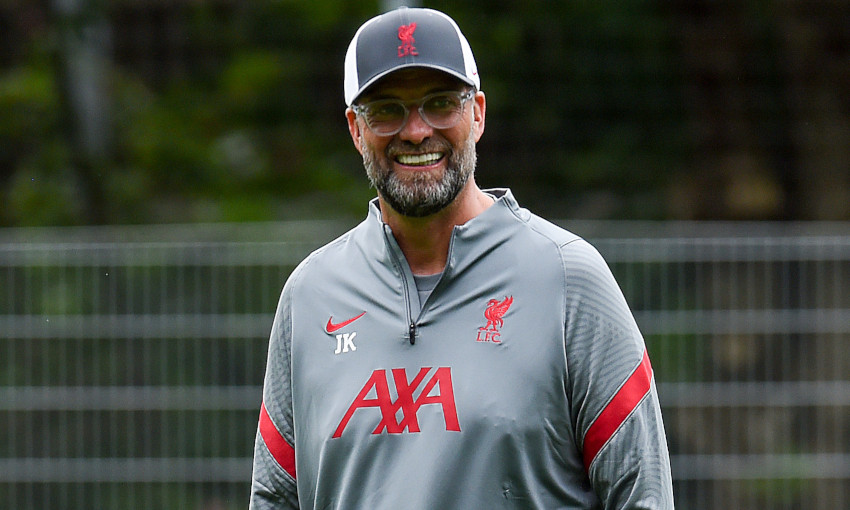 Jürgen Klopp is likely to give as many players as possible some game time as Liverpool contest their first pre-season friendly of the summer against VfB Stuttgart tonight.

The Reds take on the newly-promoted Bundesliga club in Salzburg as preparations at their training camp in Austria step up a level.

Klopp and his staff have led the champions through a week of drills at their base – and the manager is pleased by the work put in so far by his players.

Ahead of tonight’s game, which you can watch live on LFCTV and LFCTV GO from 4.30pm BST, the manager sat down with Liverpoolfc.com to preview the encounter.

Watch what he had to say on LFCTV GO, or scroll down to read a transcript.

How have the training sessions gone so far out here? The 'young versus old' on Thursday seemed to be quite lively...

Yeah, but I have to say it was not 'young versus old', it was a finishing session with a few special assets and a young one. So in this moment when you see the team old, then you think, 'How could they lose the game?' But in finishing it's absolutely possible. It was a very close-ish decision – I think it was 47-45, so a lot of finishes involved in that obviously. It's just nice. With all the hard work we have to do, we try to create a little bit of competition when possible. Most of the time it's just about preparing ourselves for the season, all of us for the season. That's pretty hard work. So far the training sessions obviously looked really good, the intensity level is quite exciting, to be honest. Without me asking for what we are used to investing in a training is pretty special. As long as we keep that going, we will be at least physically pretty fit for the season. That's for sure.

First friendly up on Saturday against Stuttgart. What kind of test will they provide?

We planned obviously two games – one against Stuttgart, one against Salzburg. They will both be pretty tough. Stuttgart got promoted last season, a few weeks ago, let me say it like this. It's a first division club, a historical Bundesliga club, if you want, but had to go the hard way to the second Bundesliga. But now they are back, pretty young team, pretty lively, don't know too much about them, to be 100 per cent honest, but I don't want to know too much about them, I just want us to react on what they are asking for – that's, for me, pre-season as well. So there will not be a long meeting and I will tell everything what I know about the opponent because I just don't know a lot about the opponent, apart from most of the players. I don't even know the manager exactly because he came up when I had left Germany already long ago, so that will be really exciting. But they always have good football teams and Nat [Phillips] played there last year, so that will be a big hello for him, which is nice.

Pre-season games are very, very important for the moment but they should not be historical games where everybody is speaking about [them] even years later. It's just necessary that we show after a lot of tough sessions that we are ready to fight against the tiredness or whatever. That's how it is because in one week we play Arsenal, so there's not massive time between now and then. Just throw on the pitch what we have in this moment, we will make changes, everybody will play pretty much and three days later we play against Salzburg, which will be very, very difficult, I'm 100 per cent sure. I think they [Salzburg] start next week already with the season, so they probably trained much longer than we do. That will be really interesting. They have, I'm pretty sure, again a really strong side and Takumi's coming back, Sadio, Naby, it will be nice for them, it's nice for us. So play the game, again a lot of changes we can expect and then try to be ready for Saturday.

Injuries aside, this must be one of the first times in your managerial career you'll have had every player available for the first pre-season friendly…

No, it's actually not the first time in my life because at Mainz it was always like this, in Dortmund in the early stages as well we didn't have international players. So that cuts pre-season short, the international duty, so that they come back pretty much a week before the season starts. But the majority for now, it's for a long time the first time that it is like this and I'm really happy about that. That's why we try to train as often as possible and we cannot care and don't care about the games too much, it's just so that we are ready for them. With this game, we try everything to be ready for the Arsenal game but even after that there are another two weeks. Strange weeks because of international duty, then we will see who exactly has to go for international duty. Holland we know already, England as well, probably Wales. Brazil and African nations are not, which helps, so they will stay here. We try to organise a friendly for that time as well but we will see if it's possible. We have to use this pre-season, it's the only time in the year when we can really train, so we should do it.

Of course, Stuttgart are a club you have a connection with…

They are. They are the team in the area where I grew up. There were a lot of people who were supportive of Bayern Munich and stuff like this... [but if] there was only one club, then it was Stuttgart. I loved the shirt, the traditional shirt was always white with a red stripe, a big one. I love the badge and all that stuff. As a kid I was a massive, massive supporter. It's long ago that I was a kid, honestly, and a lot of things happen since then but it's, for sure, one of my favourite German clubs, it's clear.

Visit liverpoolfc.com/watch for information on how to subscribe and tune in on LFCTV and LFCTV GO.