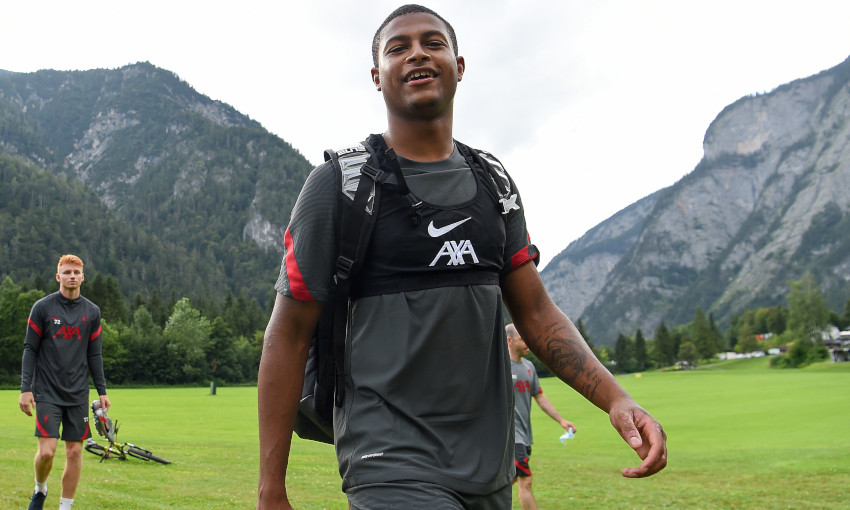 Rhian Brewster believes the experience he garnered during his half-year loan with Swansea City will stand him in good stead as he returns to Liverpool to start work for 2020-21.

The striker was among the players who travelled to Austria for the Reds’ pre-season training camp on Saturday, having spent the second part of last term with the Swans.

Brewster is thankful for the opportunities he was afforded at the Liberty Stadium, where he scored 11 times in 22 appearances to help them into the Championship play-offs.

“It was a good experience – a great experience, I would say,” the 20-year-old told Liverpoolfc.com following the first session in Austria. “Going there in January, having that first game against Cardiff and the last game against Brentford, I’ve had a lot of experiences, ups and downs in football.

“I would say I had more highs than lows there, but it was a great experience and great to get some first-team games under my belt.

“It’s very good for your development at such a young age. Not a lot of 20-year-olds can say they’ve played in the play-offs. Obviously we didn’t quite make it to the final and get promoted, but to play in the semi-final, the cameras are on you and they are high-pressure games, as you will have seen on TV.

“So, it’s good to get them under your belt from an early age and who knows, hopefully I can play in a lot more high-pressure games to come.”

Liverpool were never far from Brewster’s mind during his time away from Anfield as he supported their title charge from afar.

Similarly, the Reds were keeping a close eye on the progress of the young forward with Steve Cooper’s side.

“I kept in touch with the lads, quite a few people messaged me – and the staff messaged me as well,” he explained.

Brewster was able to take in the footage of celebrations as his parent club ended a 30-year wait for the league title from his temporary home in Swansea in June.

And on the night Jordan Henderson lifted the trophy aloft, the striker was on the scoresheet for the Swans in a 4-1 win at Reading – meaning he had to catch up on the iconic Anfield scenes later that evening.

He detailed: “I was in my apartment in Swansea, watching on TV [the night Liverpool were crowned champions]. I think we had a game a couple of days later, so there wasn’t any partying, but I was happy for the boys and happy to then see them lift the trophy.

“Liverpool fans have been waiting 30 years for it and now [the dream] has finally come true. Seeing how happy it made the boys and the fans was a great feeling. Obviously I know the boys, I know how they are, so watching them lift it was great.

“I was busy on my phone that night, I sent a message to everybody!”

Liverpool’s first day of pre-season training consisted of a 90-minute workout in Austria, with a double session scheduled for Sunday.

But even though the drills can be notoriously gruelling, particularly after a post-campaign break, Brewster is relishing every moment of it.

“It’s good to be back and see the boys and the staff and stuff – and it feels good to pull a Liverpool shirt back on,” he said.

“It’s a bit different because we didn’t have the full time off that you normally get; it was a shorter period of time that we had off, so we didn’t lose that much fitness, I would say. The first day of pre-season is always going to be tough, but it was a good day and good to get back into it.

“It feels good to maybe be a part of it next season. Being away and then coming back, it’s a bit different, but seeing everyone again, seeing them all smiling and coming back confident, it’s good to be back.”

Back at Liverpool and with pre-season training under way, Brewster’s aim for the coming weeks is a simple one.

“The plan for me is to work hard every day and see what happens from there,” he states.

“Seeing them win the title was great and now to be back here, with them, is amazing. It’s good to be among it again.”