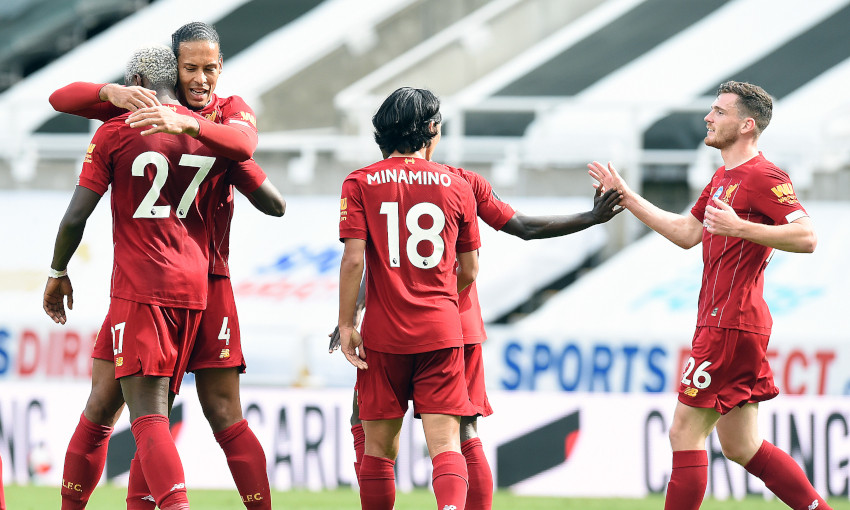 Liverpool set a new club record for top-flight points as they ended a memorable 2019-20 season with a 3-1 victory over Newcastle United.

The Magpies broke the deadlock inside the opening minute of the match courtesy of Dwight Gayle’s low finish, though the champions restored parity before the break through Virgil van Dijk’s looping header.

Outstanding second-half strikes from Divock Origi and substitute Sadio Mane completed the turnaround to clinch all three points for the visitors as the Reds secured a 32nd league win to reach the 99-point mark.

Van Dijk, meanwhile, became the first Liverpool outfield player to be an ever-present in back-to-back Premier League seasons since Robbie Fowler in 1994-95 and 1995-96.

Newcastle captured an early lead, striking with just 26 seconds on the clock. A quickly-taken free-kick in midfield by former Reds midfielder Jonjo Shelvey set up Gayle, who prodded past Alisson Becker to hand Steve Bruce’s side the perfect start to proceedings.

The Reds responded to falling behind by producing a period of sustained pressure, with Naby Keita and Minamino at the heart of their attacking play. A fierce drive from the latter forced Martin Dubravka into action, while Keita sent an ambitious effort rising over the crossbar soon afterwards.

Enjoying the majority of possession, Liverpool deservedly drew level in the 38th minute.

Oxlade-Chamberlain delivered a teasing ball from the right flank into the penalty area, having created space for himself, which Van Dijk rose highest to head into the top right corner for his fifth league goal of the campaign.

Liverpool fashioned two further opportunities before the half-time whistle, Oxlade-Chamberlain and Minamino letting loose as the Reds searched for a second goal.

The champions’ dominance continued shortly after the interval as Williams fired off target before Van Dijk, again, displayed his aerial prowess to test the reflexes of Dubravka.

Klopp’s side wouldn’t have to wait long to take the lead, however, as Origi fired into the bottom right corner in emphatic style.

Having controlled a long pass forward from Van Dijk, Andy Robertson teed up the Belgian forward, who made no mistake with a low, driven shot.

A triple substitution arrived five minutes later as the Reds’ front three of Mohamed Salah, Roberto Firmino and Mane all entered the fray.

Salah, chasing Roger Hunt’s record of 20 league goals in three successive seasons, was inches away from making an instant impact as he rattled the post less than a minute after gracing the pitch.

The Egyptian forward was then denied moments later by defender Federico Fernandez, who intervened with a last-ditch challenge to thwart the 28-year-old.

But a third did arrive with a minute of play remaining, Mane cutting in off the left flank and curling a finish into the far corner to guarantee a total of 99 points for the Premier League champions in 2019-20.