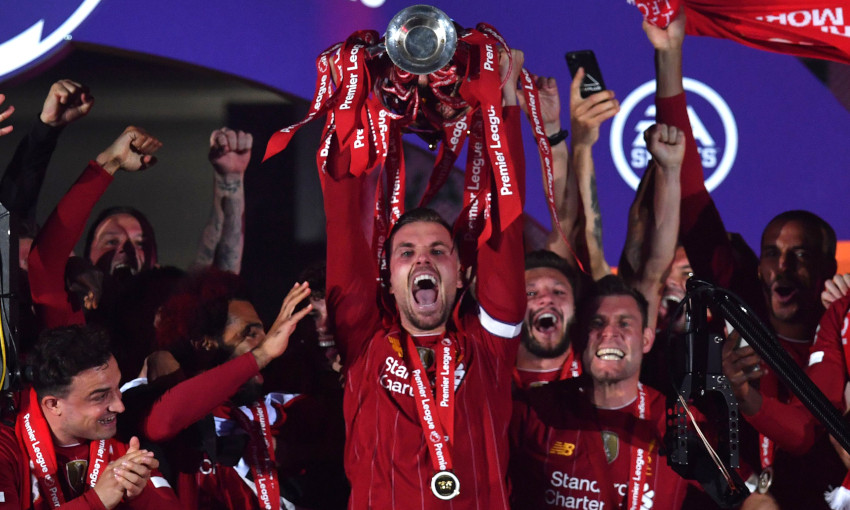 Jürgen Klopp paid a glowing tribute to Jordan Henderson as he detailed his pride at seeing his captain named the Football Writers’ Association’s Footballer of the Year for 2019-20.

The midfielder was announced as the recipient of the prize on Friday morning in a week in which he lifted the Reds’ first league title in 30 years.

He is the 12th player in the history of the club to claim the accolade, taking more than a quarter of the votes to see off competition from Kevin De Bruyne and Marcus Rashford, as well as teammates Virgil van Dijk and Sadio Mane, in order to do so.

“His resilience made him the player he is now,” Klopp told journalists during his pre-Newcastle United press conference.

“The question is always for footballers what makes you the player you are? Is it the talent or is it the attitude? The answer is a mix and Hendo is the perfect answer for that. He is really skilled – he was always a really skilled boy. I saw videos of him when he was really young, I think Ox found them somewhere and shared them with all of us. So, it was already there, an exceptional player. But then on at the highest level you have to be ready to fight every day and that’s what he did he did.

“With all the things people said about him in the past before I came in, I don’t know what it was exactly, but he made his way. It is absolutely deserved. Yes, other players played an exceptional season, 100 per cent, but if you want to have a guy that really fought his way through to the point where he is now and [what he] became, it is just absolutely deserved, one of the best players in the league.

Henderson was installed as Liverpool’s captain in the summer of 2015 following the departure of Steven Gerrard, meaning he held the position upon the appointment of Klopp soon after.

The manager has been delighted at being able to witness the development of his No.14 on and off the pitch over the past five years of working together.

Klopp continued: “He's very self-critical and very, very ambitious on the other side, which is a fight for all of us probably always when you are not happy about yourself and stuff like this.

“He was injured when I came in; we went to an away game and Hendo asked me if he could join the team and come with us, even though he was injured. I thought, ‘Wow, of course you can come’ and this shows just two things – in that moment, I think the process of getting used to being a captain – and rightly so the captain of this team – was not finalised in this moment. It means that he did not exactly what he thinks is right, he thought in this moment he still did things that he thought other people would expect him to do.

“I think over the years, he really found the perfect way to deal with all the situations, which are important or happen to you when you are captain of such a big club, such a big team. He grew in that role in an exceptional way, I cannot imagine a player who would have done it like this. That makes him the wonderful person he is today.

“It is so important, he helped me from the first day and I tried to help him as well a little bit. So that worked out really well. It's a special achievement.

“I'm not happy with what you all write, but obviously you have a similar view on things in a few departments at least [because] he would've been my choice as well this year.

“As I said, in our team we had exceptional performances over the whole year, but the package with leadership, attitude and consistency was really special of Hendo this year. I'm really happy for him.”