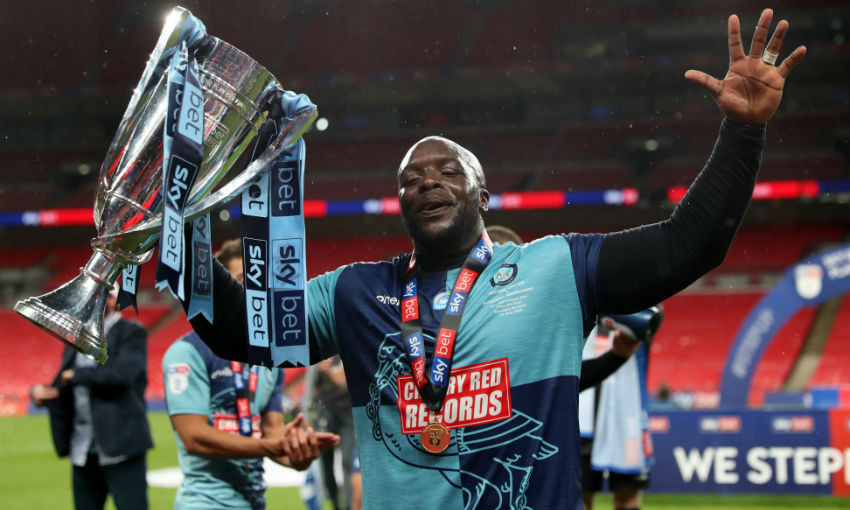 Adebayo Akinfenwa has an invitation to Liverpool’s future Premier League title parade after Jürgen Klopp fulfilled his request for a congratulatory WhatsApp message.

The Wycombe Wanderers striker - and huge Reds fan - called for contact from Klopp during an emotional post-match interview in the aftermath of his team’s League One play-off final win over Oxford United at Wembley on Monday night.

The boss duly responded and Akinfenwa posted the video message he received from Merseyside on social media.

Are u crazyyyyyyy the man, the myth, the legend sent me a Watsapp. Today can’t get any better. Thank you Klopp… https://t.co/HYXn7XtzpW

On Tuesday, Klopp was asked when he’ll meet up with the forward and whether he had received a reply.

“When it’s possible, in the future one day,” the manager said. “I don’t know when exactly but he is invited for the parade, 100 per cent!

“I saw, before the video, when he was sitting in the team meeting in a Liverpool kit which I thought was really funny! I watched the game last night [and] yes, he responded - he sent a video back. It’s private [what he said], at least a few things in life should stay private.

“It was nice, he was obviously really happy.”

Klopp went on to state how happy stories such as that of the 38-year-old Akinfenwa - who was without a club four years ago but can now look forward to his first opportunity to play at Championship level - make him.

He continued: “It was just nice to see. Yesterday before the game I was, to be 100 per cent honest, neither a Wycombe supporter or an Oxford supporter but Ben Woodburn plays for Oxford so I was slightly more on the side of Oxford.

“But I watched the game just because I wanted to see it and then when they won it, it's just nice, you see how much it means to them. When you are involved, I don’t like the play-offs too much. I was [involved] in my life once or twice and the pressure is really incredible, it’s not a lot to do with enjoyment.

“But for the winner afterwards it’s obviously outstanding and I liked it a lot. It meant a lot to the manager last night [and] obviously to all the players there it meant a lot and it was, on the other hand side, really hard for the Oxford boys. That’s how football is sometimes, there’s only one winner possible in these kind of games and it was last night not Oxford, obviously. That’s how it is.

“I just enjoy these kind of stories. I like it because, how you know, as a player I was in similar situations, that’s how it is.

“Football meant everything to me before somebody thought, ‘It’s worth giving him some money for it’ and that never changed. That’s why I always will love this game because you can fulfil your own dreams, it just depends on the dreams.

“For some teams it’s a bit earlier, for other teams they have to wait a little bit longer but if you work hard then there is still a chance for you and still a possibility for you. I hope this game stays like it is - and I'm not worried about that, this game will always have these kinds of chances.

“It’s just exactly how it should be: if you work really hard, you can make it.”