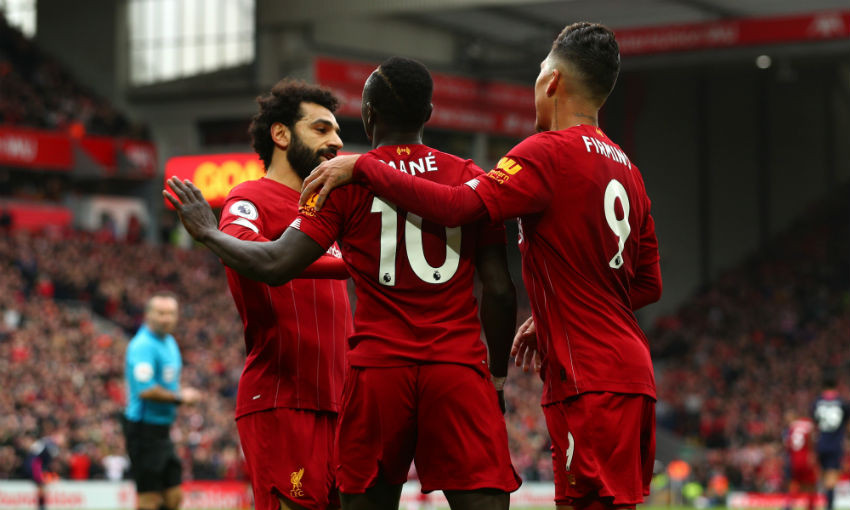 They are numbers described as 'really exceptional' by Jürgen Klopp, but Liverpool's front three themselves want more.

The Egyptian, Sadio Mane and Roberto Firmino have scored a combined total of 250 goals in all competitions for the Reds across three seasons.

"I think our target is another 250 again and more trophies with Liverpool," Mane tells Liverpoolfc.com via video link.

"I think it's just unbelievable. It's not easy to play in England and score this [amount] of goals. It's just incredible because there are so many good teams and strong defenders, so it's not easy.

"We always try to work harder and harder to get better and better to do the best for the team.

"So you just need to be fit and then you play alongside them because they make everything easier for me and you!"

Modesty aside, Mane has himself hit incredible heights on a personal level, too.

His finish last weekend against Aston Villa meant he's now netted at least 20 goals in his past three seasons at Liverpool.

Such personal development and the team's success has the 2016 arrival feeling in a privileged position.

"Well, I couldn't be more happy, proud to be a Liverpool player," he says. "For sure it has been a great season, a great four years for me.

"I'm really happy to be alongside my teammates, staff, everything. I'm just happy and proud to be here.

"I think as a player I'm still learning, I never stop learning and you can see me and all of the boys have been developed a lot. We are really, really happy about it.

"At the same time, we never stop working harder because it has always been a dream for me to play and always getting better and better – especially to score more goals, more assists for my team and to win trophies.

"Honestly, I think it has been most special for me and my teammates. After 30 years of waiting [for] the fans, I still don't believe it. But we did it and I think it's just so special.

"We are really happy and we are really proud after 30 years to be the players who win the [Premier League] trophy with Liverpool Football Club. Hopefully more and more to come."

Though already Premier League champions, Mane and his teammates are still out to deliver even more history for the club.

With four matches remaining in the season, the Reds have their sights on setting the Premier League points record.

Their task of eclipsing Manchester City's tally of 100 in 2017-18 continues on Saturday afternoon when Burnley arrive at Anfield.

On that particular objective, Mane continues: "We can see if we win the four games, we're going to be the first ever team to collect this kind of [points total] in a single season.

"Records in football are always there to be broken. So if we have a chance to do it, never hesitate. It's our target for sure.

"Without making pressure [for] ourselves, we try to take it game by game because it's going to be a tough game.

"Difficult game but we're going to try to take it game by game and try to win all of them if possible."

But the Reds must do so without their influential captain Jordan Henderson, who is set to be sidelined for the remainder of the campaign with a knee injury.

"Sadly it's a complicated moment for the team and for him because we love to have Hendo in the squad," Mane finishes.

"He's a great person out of the pitch and on the pitch he's also a great leader. He's always been there for his team, giving 100 per cent every single game.

"For sure we would love to have him but, like I always say, it's part of football and now we're also going to be here for him morally to support and be positive with him.

"I think, for sure, he will come back stronger as soon as possible."