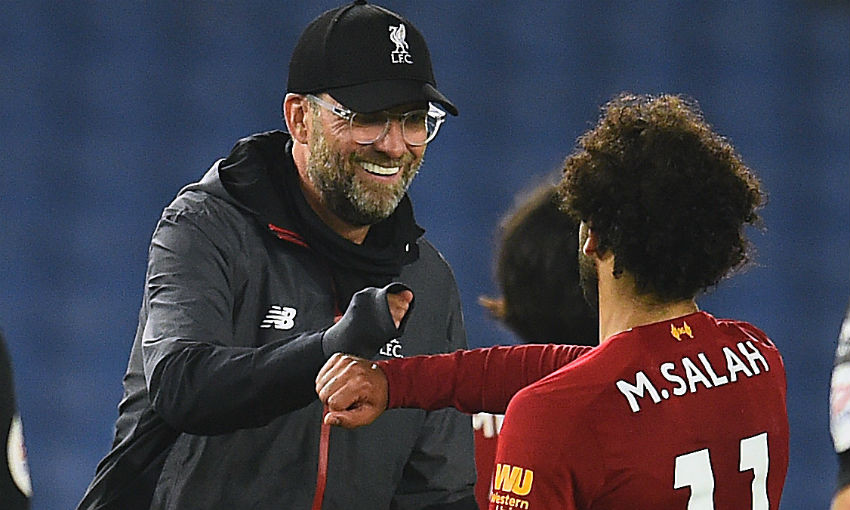 Jürgen Klopp saluted Mohamed Salah’s ‘crazy’ numbers with Liverpool’s No.11 on the brink of yet another goalscoring milestone.

Salah is just one shy of reaching 20 Premier League strikes for the third consecutive season following his brace in the champions’ 3-1 win over Brighton and Hove Albion.

That double, plus his assist for Jordan Henderson at the Amex Stadium, took the forward to 100 goal involvements (73 goals, 27 assists) in only 104 top-flight appearances for the Reds - statistics Klopp described in glowing terms ahead of Saturday’s meeting with Burnley at Anfield.

“Didn’t we say something similar about Sadio a few days ago? It’s incredible. We would not be where we are if these boys did not perform on this consistent high level and Mo, of course, come on, his numbers are crazy - absolutely crazy,” the boss said.

“He’s involved in 100 [Premier League] goals since he is here, 73 [goals], 27 [assists]. Just outstanding numbers, world-class numbers. Nobody should be surprised any more because the boys show that week in and week out [for] a while already.

“We know that it’s special but there’s a lot of work [involved] and you can only score if you invest that in each game - if you are in the right positions and do the right thing, and that’s what the boys were always ready to do and what they have to do still and then it will continue. Long may it continue, that would be great.”

Klopp was also asked whether Salah’s teammates are actively trying to feed him opportunities so he can win a third successive Golden Boot, with an instance of Roberto Firmino passing to the Egyptian versus Brighton cited.

The manager replied: “I hope the boys were not in that mood in that moment but when I saw that situation back, it was just because of Bobby’s football intelligence.

“He was not in the best position, if he would have shot it’s a completely different finish so Mo came around and was in a much better place to finish it off. That’s just Bobby, I don’t think he left the ball just to let Mo shoot for the Golden Boot or whatever because you cannot have this kind of mindset.

“Football is too quick that you could do that and where help is needed we all help each other. We have with Sadio another contender, if you want, with 16 [goals], it’s not too close but it’s not impossible as well.