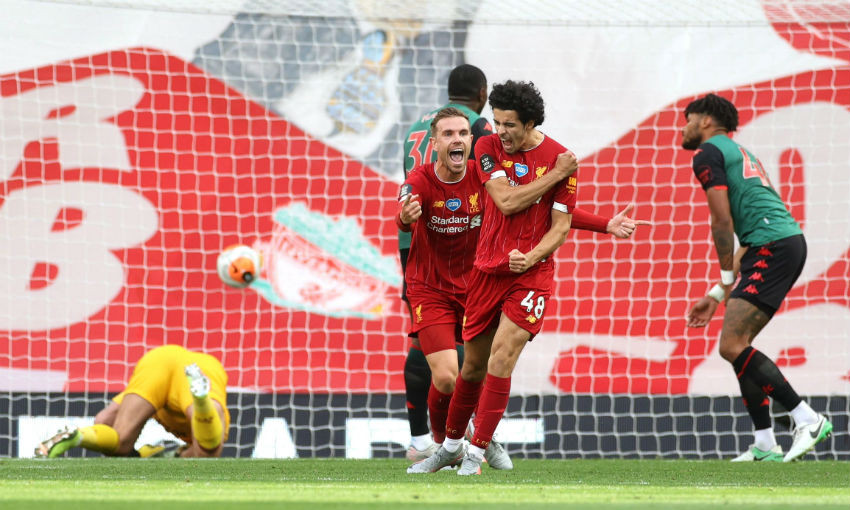 Liverpool returned to winning ways with a 2-0 victory over Aston Villa at Anfield on Sunday afternoon.

Sadio Mane and substitute Curtis Jones both scored second-half goals as the Reds immediately bounced back following the midweek defeat at Manchester City.

A fine move opens the game up

It's fair to admit Liverpool's attacking play wasn't as smooth as it had been in previous Premier League fixtures this season.

But one spell of fine, patient and penetrative pressure in the second half unlocked a spirited Villa backline.

Trent Alexander-Arnold's incisive pass from a central area found Keita in the box as the No.8 then delivered an even better one to find Mane.

Roberto Firmino created the space and Keita found Mane near the six-yard box, with the resulting side-footed effort striking the bar and bouncing over the goalline to make it 1-0.

Jones gets to business quickly

It's been quite the weekend for the 19-year-old.

Having been rewarded with a new long-term contract the day before, Jones netted his third goal for his boyhood club and first in the Premier League.

"Every opportunity that I get I'll definitely be taking it with both hands and giving it the best shot that I've got," the teenager declared after signing the deal. He meant it.

Introduced in the 84th minute, it took just five minutes to leave his lasting mark on the game.

The No.48 struck a clinical first-time finish from Mohamed Salah's cushioned header to wrap up the three points for the Reds.

It's another lovely moment for the Scouser.

Three in a row for Sadio

Mane's finish was his 20th goal of the season in all competitions as he's now reached that particular figure in his last three campaigns with the club.

Having also scored the winner in November's meeting, the speedster continued his rich vein of form against Villa while in England. He's now been involved directly in eight goals (six goals, two assists) in his last five league outings versus the Villans.

Sunday's strike also brought up Mane's half-century of goals scored at Anfield since arriving from Southampton in the summer of 2016.

Reds in goal at either end

He's aiming to become the first Liverpool goalkeeper to do just that since the man who happened to be in goal for Villa on Sunday. Indeed, Pepe Reina won the accolade in each of his first three seasons at Anfield.

Alisson's latest clean sheet – during which he made a number of impressive saves – took him level with Burnley's Nick Pope on 13 for the campaign so far.

His tally for 2019-20 is impressive on the face of it but even more so with context added to it. The No.1 has missed a total of nine league matches this term as a result of suspension and injury.

The Reds returned to Anfield for the first time since winning the Premier League and were welcomed onto the pitch with a guard of honour from Villa's players and staff.

The contest was also played in the backdrop of new decorations in the stands, with supporters' banners honouring the historic achievement.

What a fine sight.