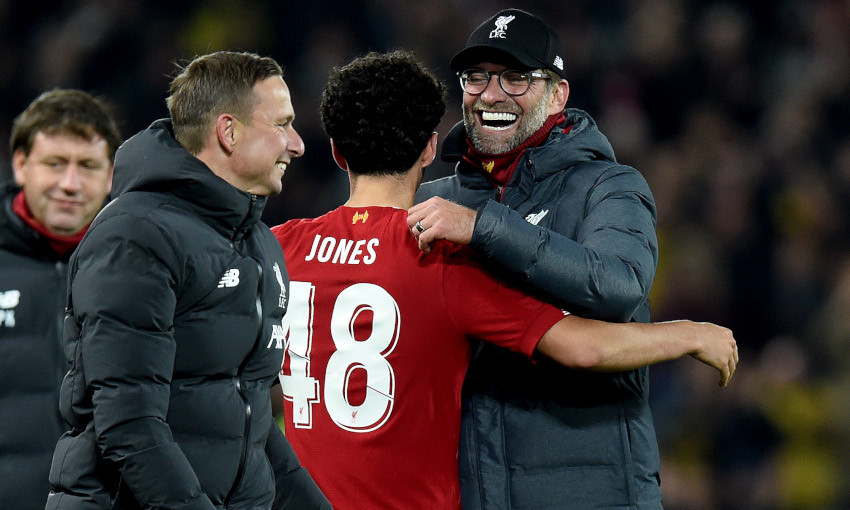 Jürgen Klopp credits Curtis Jones' progression as a footballer this season as the reason for his new long-term Liverpool contract.

The Scouser has extended his stay with his boyhood club towards the end of an important campaign on a personal level.

Jones became the Reds' youngest ever captain for the FA Cup tie with Shrewsbury Town in February, having also made his Premier League debut and netted a stunning winner in a Merseyside derby.

As such, Klopp is excited to see what the future holds for the No.48 in a Liverpool shirt after penning this new deal with the Premier League champions.

Reacting to the news, the boss told Liverpoolfc.com: “Really pleased – and absolutely deserved.

“This is a little different to the announcement we made last year when Curtis signed his last contract. That was about both the player and club making a long-term commitment to each other.

“Today’s news is more about reward. When Curtis signed we made promises to him that if he continued to improve and grow as a player that we would make sure we recognised that and that is what we have now done. That is our way here.

“We want our young players to achieve their maximum and a big part of that is keeping the focus on their journey and not just a destination. You have to make sure their development is constant, otherwise you are failing them.

“I could not be more pleased or proud to see how he has blossomed. Super attitude – brilliant application – and a really important member of this squad now.

“His quality is not in doubt; technically and ability-wise at the highest level. But plenty of young players have the skills, it’s about more than that if you want to achieve potential and Curtis is showing it.

“For Curtis now it’s about continuing his improvement. If he does that, he can achieve anything he wants in the game. I think we are the perfect environment for him, so it’s a very cool situation.

“I love it that our supporters will be able to enjoy having more than one ‘Scouser in our team’.”