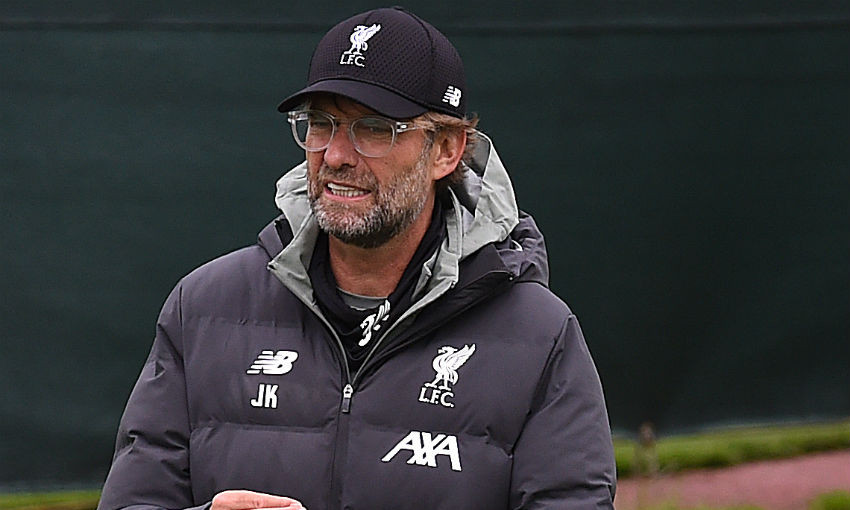 Jürgen Klopp has stressed the need for his Liverpool players to 'dig in' to battle the quick turnaround when Aston Villa arrive at Anfield on the weekend.

The Premier League champions are back in action on Sunday afternoon shortly following their 4-0 defeat away to Manchester City on Thursday.

Speaking at a press conference to preview Sunday's affair, Klopp detailed the collective determination the Reds possess as they look to return to winning ways.

Read on below for the boss' thoughts on the upcoming clash...

On potentially winning every single game at Anfield in the league this season...

That shows it is obviously difficult but you cannot do that with thinking about how many games and stuff like this. We never thought about it, how long the run is or whatever, that we didn't lose or that we won, all this kind of stuff. We respect Aston Villa, we respect their situation. We know the situation they are in and before the game it looks like with our numbers and Villa’s numbers that it is clear, but we never saw football games like this. Aston Villa have a lot of quality and they do well and they will defend with a compact formation. That's what I'm thinking about, not the records we can break. We have to break, if you want, the formation of Aston Villa and that's what we are concerned about.

This morning, early, we had the Aston Villa meeting and we saw the things we have to see and now we have to work with that. The boys have to recover, tomorrow they get the information and one session. Then we play again, that is the situation now and it's not the only situation. Look, this season is a very special season and it's special for us in a positive way, but special as well from a challenging point of view. Not only that we had a three-month break in the middle of the season as well, we play now in the last three weeks or how long it is, we play pretty much six games, which means every three days you play a game and that’s really demanding for all of us. We have to really dig in in these situations and that’s what I liked of the game last night because the attitude was brilliant. We were really fighting, the desire was there, it was all there. We were, let me say, in four moments not focused enough and maybe there are some explanations for that – it's the quality of City using these situations. We have to make sure we don’t have moments like this in the game on Sunday. But still there are two days’ time to prepare that.

Not our best performance. We’ll make sure we‘ll show up strong next time 👊🏾 #MCILIV https://t.co/EFnnPECbSI

We didn’t lose a lot of games in the last two-and-a-half years or so, but we lost them and they always feel really like defeats. So far we always used that for the next games – not only the next game but for the next games, yes. If you think about things we didn't do well, so in this department we have to show a reaction but the reaction doesn’t mean we have to change everything. We just have to be spot on in these moments and we cannot switch off or whatever. As an example, Joe was alone in the challenge with Sterling but he should have shouted at everybody around because he knew that he was alone, the others maybe didn’t look at that in that moment. These are the situations we have to change. Hendo could have been there, usually Fabinho should have been there but he pushed up and all that stuff. So there's obviously an explanation. Yes, we have to be at 100 per cent and we knew that always, we knew it always from day one. If you want to reach something special, the only way to do that is being 100 per cent in the specific game, which means in all specific situations. Do we have to lose 4-0 to learn that? I am not sure but it can help, it makes the point absolutely clear. We will try again to use the information from last night.

On Villa and November's meeting with them...

This game was a special game. That will be seen as a special game when people speak in 10 years about this season and they say, 'OK, one of the key moments of the season was, for sure, the Aston Villa game.' I remember exactly how they scored the goal, I remember our goals, I remember a lot of parts of the game, which is not the case for all football games we played in this season, for example. But it was a very important one for us. Villa was not in a bad moment at that time, they were in a rather good moment, I think, and since then a lot of things changed. Can we use this game for the preparation? Not really. But in general, it was a really important game.

Since then Aston Villa changed system, I think, twice – playing a back five, last game they played kind of a diamond, bringing Jack Grealish in his best position maybe. We don't know exactly how they will line up against us but we have to be prepared for different stuff and that’s for all of us the challenge. If some people said rhythm is better than a break, then it was an advantage for City last night. But then it should be an advantage for us as well because Aston Villa had now a week off and we played on Thursday. If people say a break is better than rhythm, then we have to show that it is not the case because we just have to be there and give Villa a proper fight. Yes, if Villa has possession, they make the pitch big, they play diagonal balls, they use the speed. They are good. But usually in games against top-six teams they don’t have like 50 or 60 per cent of the ball, it’s more like between 25 and 35 or something like that. But it's not about that, it's about what they are doing in the moments when they have the ball and we need to have solutions for that. And for the majority of the time, hopefully we have the ball and then we have to find solutions for that as well. We did that in the past very often but we need to do it on Sunday again.