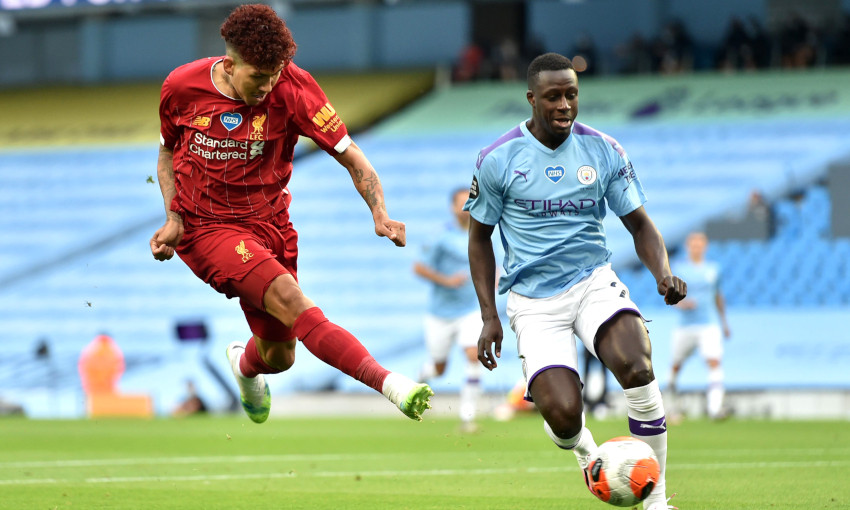 Liverpool suffered a 4-0 defeat by Manchester City at Etihad Stadium on Thursday evening in their first game since being crowned Premier League champions.

Despite Mohamed Salah hitting the post in the early exchanges, the home team went into the break holding a commanding lead.

Kevin de Bruyne’s penalty was added to by strikes from Raheem Sterling and Phil Foden as City seized control of the contest.

After a sustained spell of pressure from the Reds after the break, Alex Oxlade-Chamberlain inadvertently touched a goal-bound Sterling shot into his own net in an attempt to clear.

Liverpool elected to deploy an unchanged line-up from the XI that began their last outing eight days ago – a 4-0 win over Crystal Palace at Anfield.

James Milner returned on the substitutes’ bench following a minor hamstring issue; however, Dejan Lovren missed out as a precaution with a minor knock. Joel Matip was, as expected, absent due to a foot injury.

Before kick off, Manchester City welcomed Liverpool onto the field with a guard of honour in recognition of their coronation as Premier League champions last week, taking the crown Pep Guardiola’s men had held for the previous two seasons.

Jürgen Klopp had stressed in the build-up there would be no let-up in the Reds’ intensity despite the capture of the title – and they almost took the lead in a lively opening.

Salah beat Aymeric Laporte to a ball forward inside four minutes, but had his swipe towards goal beaten away by Ederson. Roberto Firmino’s attempted follow-up was also foiled by his compatriot in the host’s goal.

At the other end, De Bruyne saw a drive blocked inside the area by Virgil van Dijk. Liverpool broke and Sadio Mane headed well wide at the other end.

The visitors went agonisingly close again on 19 minutes when Salah collected Firmino’s reverse pass and manoeuvred into a shooting position on the edge of the box. His effort cannoned off the base of the post, with Mane unable to capitalise on the rebound.

City took the lead soon after when De Bruyne was able to convert from the penalty spot after Joe Gomez was deemed to have fouled Raheem Sterling inside the area.

The home team furthered their advantage on 35 minutes, Sterling converting from close range after swift counter.

And before the break, it was 3-0. This time, Foden emphatically finished off a slick give-and-go with De Bruyne.

Oxlade-Chamberlain replaced Gomez at the interval for Liverpool, with Fabinho dropping into defence alongside Virgil van Dijk.

But City could have furthered their lead when a wayward throw-in from Trent Alexander-Arnold afforded Gabriel Jesus an opportunity, but he was denied by Alisson Becker.

Sterling then had a strike sent spinning wide of the upright by a block from Fabinho and Van Dijk cleared off the line from Foden as the pressure continued from the home side.

Alexander-Arnold then watched as a low free-kick skimmed wide of the frame of the goal after Kyle Walker had fouled Mane on the edge of the box.

Firmino and Oxlade-Chamberlain then both had shots blocked in the same passage of play before the former was replaced by Divock Origi, while Naby Keita came on for Georginio Wijnaldum.

However, Guardiola’s team went further ahead when they punished the visitors on the counter, with Oxlade-Chamberlain getting a touch to Sterling’s shot from De Bruyne’s pass as he tried to clear.