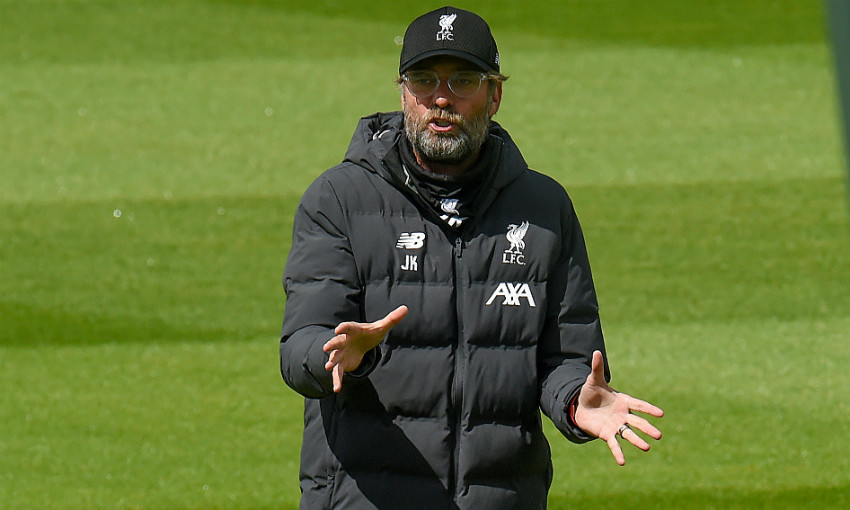 Jürgen Klopp is hoping Liverpool still make the most of home advantage when Crystal Palace arrive on Wednesday night despite the absence of supporters.

The Reds will play a competitive game at Anfield for the first time since the Premier League's return, having resumed the season with a goalless draw at Everton in a behind-closed-doors fixture at Goodison Park on Sunday.

The lack of spectators is a reality all 20 clubs across the league face for at least the remainder of 2019-20 due to COVID-19 pandemic.

While acknowledging the vital part fans play, the boss believes familiarity in an environment can help his players go one step closer to securing the league title.

"But I actually only think about this when I get asked about it because we trained for four weeks or more now, we were in a lockdown for an awful lot of time, so that means we knew it would be there.

"My rule for life is things I cannot change I don't really think about and that's how it is.

"So we have to make the best of it and the derby is a good example for that. It was maybe not the best football game you've ever seen but from an intensity point of view, it was the same like the other derbies were.

"We didn't play like we played because there were not supporters or stuff like this – yes, that's an effect as well. We took it like it is. We don't think about it anymore.

"It will be the first game at Anfield, but it's still a home game because we have our dressing room, we have all our things around, we know exactly where is what and stuff like this. That feels already good when you walk in the dugout or in the dressing room area.

"It's a home game and that's what we want to see on the pitch as well, of course. But in the end, no crowd, no atmosphere, we have to take that.

"But I liked that part of the game from the derby really because it looked, for me, like a proper football game. There was nothing different but, of course, it is completely different."

Klopp's side haven’t suffered defeat in the top flight at Anfield since April 2017 when Palace left with a 2-1 victory.

Liverpool have gone on an incredible 55-game stretch unbeaten in the league since that afternoon, with the boss aware a fine performance is required tomorrow to continue that run.

When quizzed if he remembered that particular loss, he replied: "No, but I know how defeats feel, so that means it was not, for sure, a good day.

"I didn't think this will be the start of a pretty long period where we would not lose that day. But it's long ago. I don't remember it and I don't have to remember it to know what we have to do tomorrow night.

"It is a game against a very, very good side. Roy is doing an incredible job there. The organisation of the team is really, really, really highest level. Meanwhile, the team is physically strong, good individuals, it's a good setup. It all works pretty well there.

"They have four games in a row, I think, without conceding a goal, so that's all very positive from their point of view. But we have our own targets, our own aims. We want to go with all we have and we want to make a special game for us of this game.

"It's of course important who we play, but whoever we would play it would be the same with the specific information about the opponent. In this case, it's Crystal Palace in a good moment, so that's all that we need to know.

"From this point, we have to start our plan and what we want to do in this game. I think the last game was when we won at home 4-3? I'm not 100 per cent sure but that was pretty special then as well!

"We know obviously they know how to take chances and we have to make sure that they will not have a lot or, in the best case, none."