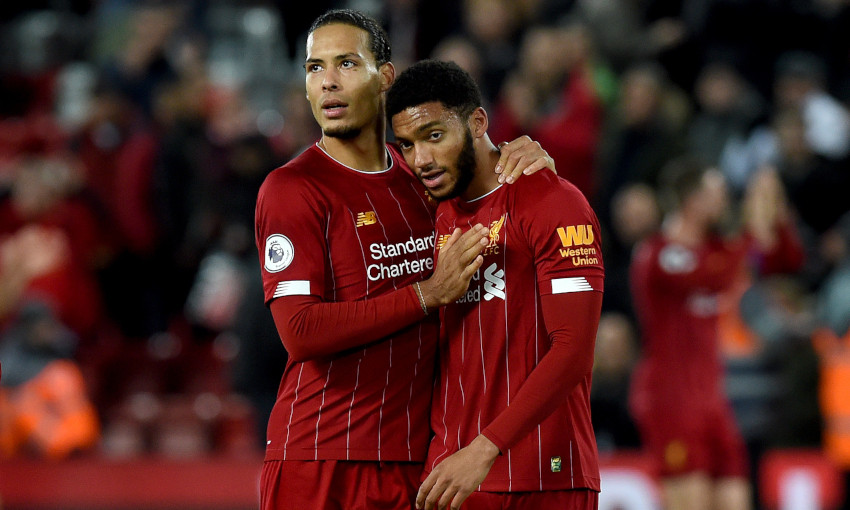 Joe Gomez traces his strong connection with Virgil van Dijk, on and off the pitch, back to the latter's earliest days with the club.

The defensive duo have become close friends since Van Dijk joined Liverpool from Southampton in January 2018, and established a formidable centre-back partnership for much of the current campaign.

Gomez, the younger of the two by six years, sees his teammate – last season’s PFA Players’ Player of the Year – as a role model to follow.

But the mutual respect they share personally and professionally is fundamental to their performances in tandem, believes Gomez.

“The stature of Virgil when he came to the club was obviously already massive,” he told Sky Sports during an interview via video link.

“I was a young centre-back, I hadn’t really got as many games there as I would have liked. But as soon as he came in he reached out with open arms and we formed a bond straight away; just the fact that he’s a down-to-earth person off the pitch, we get on really well.

“Off the pitch we have a great relationship. We talk and at times like this we FaceTime and casually speak about general things in life. That helps on the pitch, when you have an understanding and he’s your mate at the end of the day.

“Sometimes he gives me an earful! But it’s a massive help and a confidence-booster just having someone like him beside you.

“When there’s a one-v-one battle you know he’s going to dominate; every header, he doesn’t really lose headers at all. Just having him alongside me, his presence. And that’s not just me – the team and even the stadium, when Virg does down there’s a bit of a gasp and worry.

“He’s a real dominant force and a pleasure to play alongside.”

Gomez reached the landmark of 100 Liverpool appearances before the suspension of football due to the COVID-19 pandemic.

The No.12 recovered from a long-term ACL injury, sustained during Jürgen Klopp’s first week as manager, to collect winner’s medals in the Champions League, UEFA Super Cup and FIFA Club World Cup at the age of 22.

But he does not want to stop there.

“I’ve had a lot of ups and downs, they have definitely put perspective on things in terms of just being grateful to play the game and always being a student of the game,” he said.

“I’ve enjoyed the consistency and I’ve learned a lot about my body, I definitely took a lot from those injury periods.

“I’m at a club where there’s a platform that speaks for itself and on top of that a great manager that has helped me learn consistently. Obviously my dream is to be the best I can be.

“Virgil is an incredible influence on me and someone I can look up to, he doesn’t have many flaws at all. For me, it’s just about learning and developing the things I feel I can improve.

“My aim is to be up there and try to be the best I can be, wherever that takes me; hopefully at Liverpool for a long time and hopefully we can achieve good things.”

As the world deals with the coronavirus outbreak, Reds players are following individual training programmes from home.

It's that time again 🥰 We check in with the Reds before another online squad yoga session - big smiles, longer hai… https://t.co/XS2FT4LWYa

And Gomez has got plenty else to keep him occupied when he’s not maintaining his fitness levels.

“Me and my missus had a little one, he’s a 10-month-old now so he’s keeping us very busy,” the England international explained. “It’s just me, her and the little one, so it’s quite quiet but we’re enjoying it.

“Obviously like everyone else, it’s a bit surreal. It has definitely put things into perspective.

“Obviously not training and having that schedule is difficult, but just to be at home with family – healthy and safe – is the main thing. There are some bigger things going on in the world than football at the minute.”