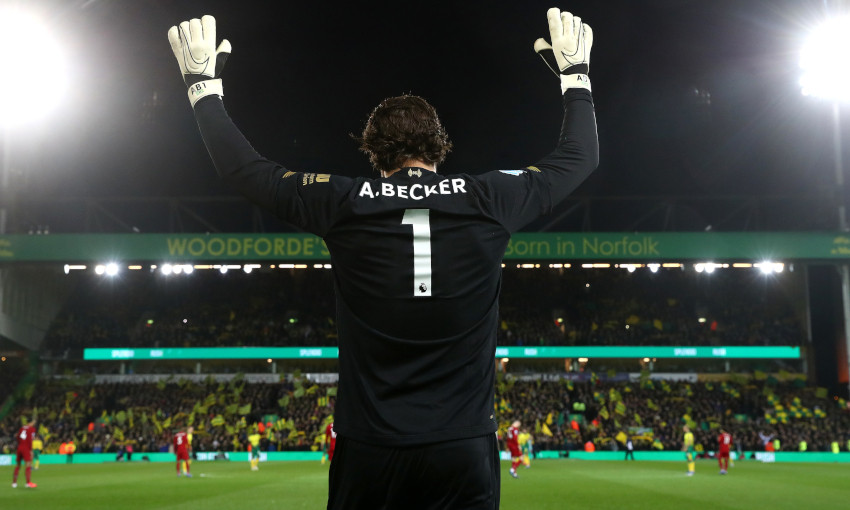 ‘He makes difficult things look easy,’ was how Jürgen Klopp assessed another standout performance from Alisson Becker earlier this year.

The manager’s words came after his goalkeeper had not only delivered another shutout, but also provided an assist as Liverpool defeated Manchester United 2-0 at Anfield to extend their lead at the top of the Premier League table.

“We knew we would get a really good goalkeeper: his character, how calm he is, helps us a lot. His goalkeeper techniques improve and improve,” added Klopp.

Indeed, Alisson’s form since he registered as a Red in the summer of 2018 has seen him clinch FIFA’s Men’s Goalkeeper of the Year accolade, as well as the inaugural Yashin Trophy, to cement his standing as one of the finest on the planet.

But what makes him step up in those key moments? What enables him to make crucial saves and react at such speed?

We selected six examples of Alisson at his best this season and asked the club’s head of goalkeeping, John Achterberg, to talk us through the attributes the Brazilian needed to thwart his opponents on each occasion.

Liverpool delivered a controlled display in Salzburg to book a place in the Champions League knockout phase in December, running out 2-0 winners.

However, the lively hosts threatened to go into the lead, and Alisson was forced to produce a double save to deny Hwang Hee-Chan and current Reds teammate Takumi Minamino in the blink of an eye…

Achterberg: “In this situation, he closed the angle, made the first block and then reacts quickly to attack the second ball. When it drops, he is on it with his positive approach. He attacks the ball instead of waiting for it so he can try to push it away from the goal. Again, he is calm in his mind and he reacts fast.

“Some reactions of a goalkeeper are instinctive, of course. It can be a split-second decision, but the main thing is your mind always has to be in an attacking mode, never take it off deciding whether you can reach the ball before anyone else, for example. If it’s a 50/50 or a 60/40, am I fast enough to get there to win it? That’s a mindset, but also a quality he has too, because he has the speed and reacts for it. It is a combination of everything in this moment.”

Another facet to Alisson’s game is his ability to read the play and snuff out danger from the back with quick thinking.

His wonderful headed clearance to prevent a Tottenham Hotspur counter-attack in the Premier League meeting in London earlier this year was a classic example of that.

Achterberg: “He is a front-footed goalkeeper, so he is always thinking forward. In this situation, he needs to make the right decisions. We are defending high as a team and he is in the line of the pass and reads the ball into the space. He adapts to the positioning of the ball and the team and then in his mind, he knows he needs to be quicker than the player who is running after it. That’s what he had to decide, but he has that mentality and the speed to react quickly to sprint to the ball to get there before the opponent.

“He is a goalie who has no fear – if he does something, he sticks to his decision. In his mind, he knows what to do and he doesn’t hesitate. That is natural goalkeeping, having no fear, reading the game and deciding.”

Speaking of quick thinking, Alisson certainly did that when he claimed a Premier League assist at Anfield at the start of the year – and against Manchester United, no less.

Collecting a wayward ball into the area in stoppage time as Liverpool looked to protect their 1-0 lead, the ‘keeper spotted an opportunity to send Mohamed Salah clean through – and seized upon it by launching a kick into the direction of the No.11, who finished at the Kop end.

In one of the most iconic scenes of the season so far, Alisson rushed from the area to run the length of the pitch and celebrate with Salah.

Achterberg: “If Ali receives the ball, he is always looking to counter and restart the game quickly, in keeping with our way of playing. Mo and Ali have had eye contact, they’re looking at each other, and Ali knows he has made the move and then has the quality to put the ball out into his path. When Ali cuts a corner or cross out, the first thing he is looking at is if there is the possibility of a quick restart with a throw or a side-volley. On this occasion, he’d practised this a couple of times in training; a forward makes the run, he tries to find them and sometimes it comes off.

“Ali has the ability with the side-volley to put the ball right into someone, he can put it where he wants because he has that quality and consistency. Adrian is not bad with it as well, to be honest – he has a good side-volley. It’s what you practise, you try to get the accuracy by working on the training pitch, knowing where you have to try to hit the ball.

“His run afterwards was very funny. It’s something that’s spontaneous; you’re excited, you’re winning the game and your emotions cannot be controlled sometimes.”

On the money at Molineux…

Liverpool needed to dig deep to grind out a 2-1 win over Wolverhampton Wanderers at Molineux – particularly after the hosts gained momentum when Raul Jimenez cancelled out Jordan Henderson’s opener.

Alisson’s intervention proved crucial as he produced top-drawer saves to thwart Adama Traore and Jimenez in the space of three minutes.

Achterberg: “Traore’s shot was a powerful one from the angle, low from about 14 yards out. Alisson is in a good position and he is ready; in his mind, he knows if Traore shoots he has to react. He has the calmness to get down and use a strong hand to make the save. His positioning gives him a good chance to make the save.

“With the Jimenez save, he stood up well in the one-v-one on the angle. He stayed in the line of the ball and let the attacker make the decision on this occasion. He covers the goal really well and blocks it with his face.

“It was 1-1 at the time and they were building a little momentum in the game, but with a goalkeeper it is always the situation – you need to try to keep making saves to affect the score positively for the team.”

No fear at Norwich…

Liverpool continued their winning sequence with a 1-0 success at Norwich, but it was a fixture that witnessed another piece of outstanding goalkeeping from Alisson.

With the scoreline still tied in the first half, Lukas Rupp broke in behind the Reds defence and found himself one-on-one with the visiting stopper. With Teemu Pukki in support, he elected to square the ball to his teammate for what surely would be a tap-in… until Alisson intervened.

Achterberg: “For this one, he stays in line with Rupp to try to force something. He tries to pass the ball square to Pukki and didn’t think Ali was staying balanced and able to react. He has the power to take one step and then power off to push the ball away before Pukki got there.

“It’s about reading what was happening; he sees two players running towards him, so he cannot sell himself on the first one, he has to wait until he does something. If Rupp had taken a bad touch, he could have closed him down, or if he passes – which he did – then he has to react and that’s what he did. He is really calm in his mind, but also has the quick feet and power to take off and react. Again, he is on the front foot and has no fear.”

Liverpool’s 3-2 win over West Ham at Anfield last month was eventful, but the Reds had overcome the setback of falling behind to put themselves into the lead heading towards the conclusion.

However, when Jarrod Bowen found himself bouncing into space inside the area, it looked like the Hammers would claim a point. That was until Alisson did what he does best.

Achterberg: “Ali goes on his intuition in this moment; he decides on the move and what he needs to do. He’s really calm, he tries to stay in the line of the player and the ball and then he is really fast on the touch to close the angle down. He really gets into the face of the ball and the player to make the block. In goalkeeping, you have to use your head – and he did that in this situation with the speed of movement and by attacking the situation. In the mind, you always have to be calm and making good decisions.

“One of his big strengths is to stay calm in the high-pressure moments and making what look like natural, easy decisions, but they’re not easy because you always need perfect solutions and decisions. It’s a quality he has.”