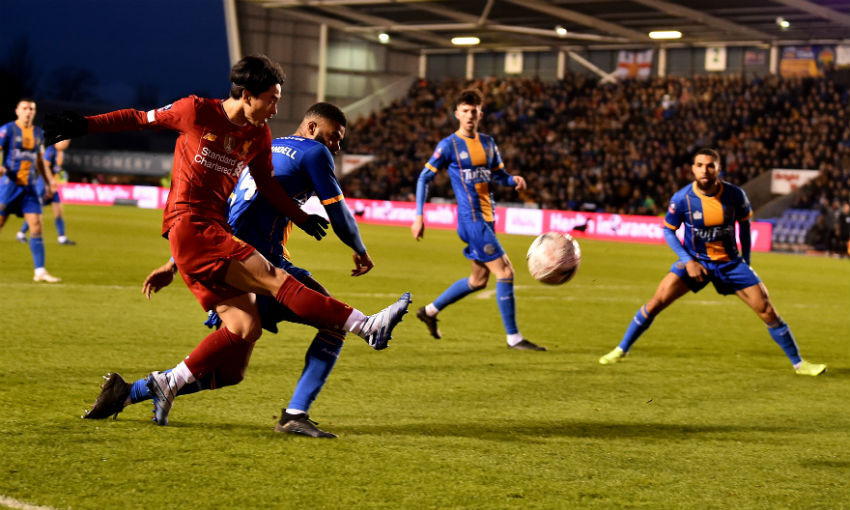 Curtis Jones’ second goal in as many games in the competition this season – a cool 15th-minute finish – and an own goal by Donald Love early in the second half looked to have won the fourth-round tie for the Reds.

However, League One side Shrewsbury battled back and earned a trip to Anfield courtesy of a quick-fire double by substitute Jason Cummings, the first of which came from the penalty spot.

Fabinho, Joel Matip and Dejan Lovren – who captained the Reds – all started for the first time in 2020 following their respective injuries as Jürgen Klopp made 11 changes to his line-up.

Liverpool controlled the early stages, bossing possession as Shrewsbury sat in deep with plenty of men behind the ball.

A swift shift through the gears by the visitors afforded Divock Origi an early sight of goal, the forward collecting Takumi Minamino’s sharp pass and shooting narrowly wide from 20 yards.

An inviting, whipped cross by Neco Williams then narrowly evaded Minamino at the near post, before Jones opened the scoring with a quarter of an hour gone.

Pedro Chirivella picked out Jones’ purposeful run from deep with a fine through-ball, and the teenager did the rest, calmly slotting in his second FA Cup goal of the campaign low beyond Max O’Leary.

While the pattern of Liverpool’s territorial dominance continued, the next clear-cut opportunity fell to Shrewsbury midway through the half when Adrian bested Shaun Whalley in a one-on-one after the ball had been turned over in the centre circle.

Minamino and Whalley then each spurned presentable chances – the former shooting over from inside the area and the latter dragging wide – to ensure it remained 1-0 at the interval.

Liverpool’s first foray forward following the restart resulted in their lead being doubled as Williams’ delivery from the right was turned into his own net by Love.

But Shrewsbury responded well to that setback and only another excellent Adrian save from Whalley, this time low down to his right after the forward had got in behind the defence, preserved the Reds’ two-goal advantage.

Josh Laurent fizzed a low effort narrowly wide on the hour but the hosts’ best spell of the game would soon bring the reward of a goal from the spot.

Laurent was felled by Yasser Larouci, and Cummings stepped up to dispatch the penalty.

And, almost immediately after Origi had seen a long-range blast saved by O’Leary, Shrewsbury drew level as Cummings won the ball back on the edge of Liverpool’s area and slid a low shot past Adrian.

Having introduced Oxlade-Chamberlain from the bench prior to the equaliser, Klopp quickly turned to Salah after it.

Firmino was next to be summoned as the Reds sought a late winner, and the No.9 saw an attempt from a tight angle saved in the 89th minute before his cross was glanced wide by Salah in stoppage time, but Shrewsbury stood firm to secure a replay.