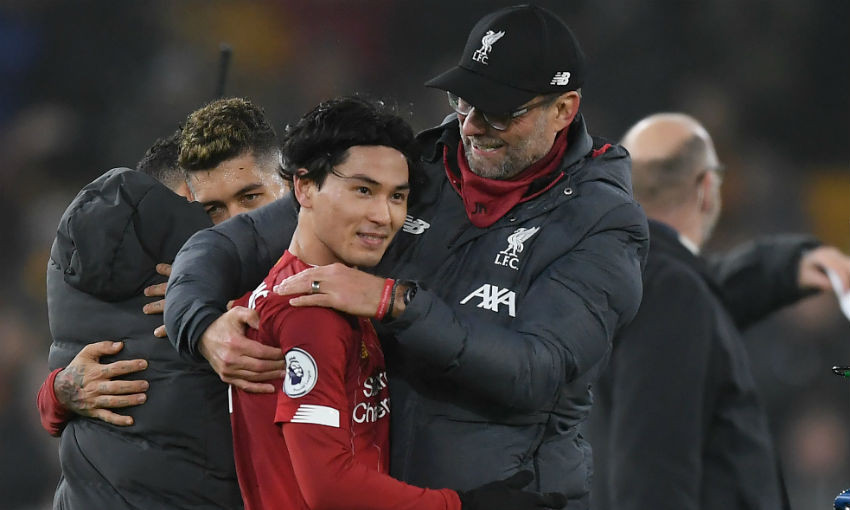 Jürgen Klopp's show of faith in Takumi Minamino has the Japan international extremely keen to repay his manager with good performances on the pitch.

Minamino made his Premier League debut at short notice in the win at Wolverhampton Wanderers on Thursday as he replaced the injured Sadio Mane just after the half-hour mark.

It was his second appearance for Liverpool since arriving from Salzburg earlier this month, with the No.18 now keen to raise his levels.

"I feel the manager's trust in me, so I really want to repay him," Minamino said following the Wolves victory. "Personally, I'm not satisfied with my own performance [at Wolves], so I want to meet the expectations of the people who support me.

"I was mentally ready to go and all I was thinking was how to fit into the team smoothly and get into the game.

"I don't feel any pressure. I'm not sure how much expectation has been put on me, but I have nothing to lose."

Minimino's pair of outings have seen him display the kind of versatility Klopp welcomed shortly after his transfer was completed.

The 25-year-old played in a central role during his bow for the Reds against Everton in the FA Cup before operating on the left and then right flank at Wolves.

"I can play on either side, but it was more about how to link up with the full-backs," Minamino continued. "If we can build a better understanding of each other, I'm sure it will get even better.

"They scored an equaliser after I came on, so I was desperate to contribute to the winning goal in any way I can.

"After we scored the second goal, I made sure to keep it simple and defend solidly."