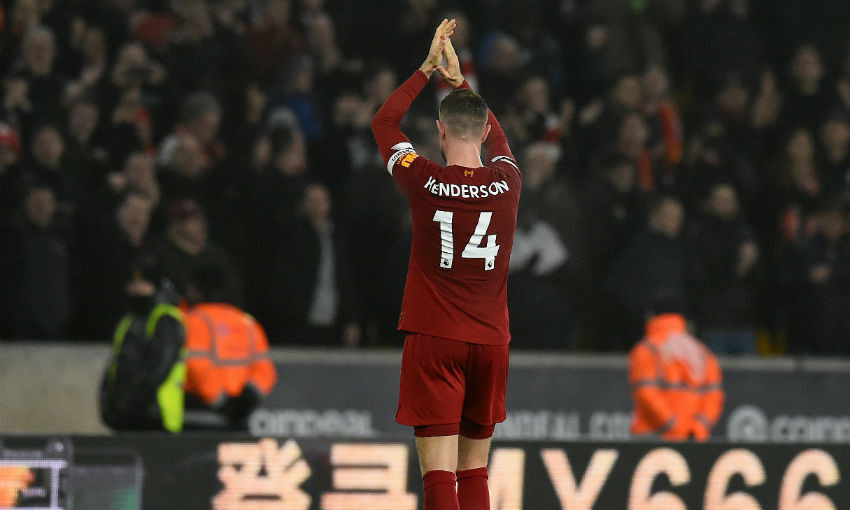 Andy Robertson has highlighted the stunning form of Jordan Henderson and believes the captain has been 'driving' Liverpool forward this season.

Henderson once again impressed with a Man of the Match performance in Thursday’s 2-1 victory at Wolverhampton Wanderers.

The midfielder opened the scoring at Molineux early in the first half before delivering the assist for Roberto Firmino’s 84th-minute winner.

“Hendo, for me, this season has been different class,” Robertson told Liverpoolfc.com following the win. “He’s been one of, if not our best player this season.

“Sometimes over the years Hendo’s not got the credit that he deserves. But when you play with him, you train with him and see the way he acts off the field, it’s an absolute pleasure [for him] to be my captain and everyone’s captain.

“For us, he’s now getting the credit that he deserves and that’s what it’s all about for us because he’s getting the recognition that his performances deserve.

“And today just epitomises Jordan Henderson – the way he went about his business, the way he scored the goal and his assist.

“His all-round play the past couple of months has been second to none and he’s really driving us forward to the position we are in now.”

Henderson is leading a Liverpool side that sits 16 points clear at the top of the Premier League, while also possessing a game in hand on second-placed Manchester City.

And Jürgen Klopp’s trophy-hungry squad are leaving it all out on the pitch in fixture after fixture in order to deliver more silverware to Anfield this term.

“We are playing for a club that is a fantastic club to play for. The fans are really enjoying it, we are all enjoying it, so why wouldn’t we put ourselves out there?

“Pain barrier or tiredness, it’s just about breaking through the barriers and it’s about just giving your all for the badge and for your teammates in there – and that’s what all of us are doing just now.

“Then we rest and maybe hobble about for a couple of days and then we go again. It’s a fantastic group of boys in there, an honest group who work so hard for each other and that’s why we are getting the results just now.”