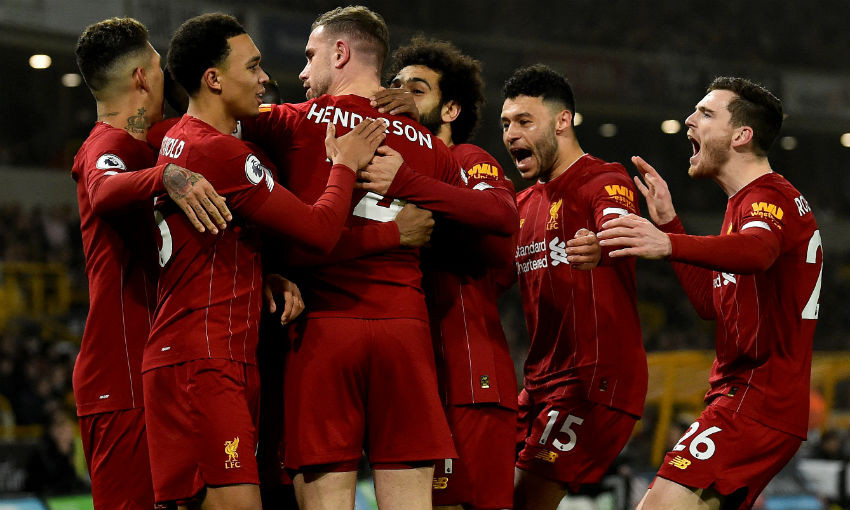 A hard-fought contest appeared to be heading for a draw after Raul Jimenez had equalised Jordan Henderson’s early opener – a fine header from Trent Alexander-Arnold’s corner – in the early stages of the second half at Molineux.

But the Premier League leaders regrouped and once again dipped into their seemingly boundless reserves of resolve, registering a 22nd win from 23 Premier League matches this season through Firmino’s emphatic left-footed finish in the 84th minute.

The Reds sit 16 points clear of second-placed Manchester City, with a game in hand on their nearest rivals.

Adam Lallana missed out due to a virus, with Neco Williams taking the midfielder’s place on the bench.

An assured start from the visitors saw them enjoy a near-monopoly on the ball in the opening few minutes.

And, after a minor scare when Matt Doherty failed to connect with Pedro Neto’s low set-piece delivery, the Reds took the lead in the eighth minute.

Alexander-Arnold was heavily involved, the right-back first seeing a free-kick hit the wall and go behind before then producing a trademark corner that Henderson planted high into Rui Patricio’s net following a darting run to the near post.

Klopp’s side dealt with that spell with conviction, though, and could have extended their lead on the counter when Sadio Mane found Mohamed Salah. However, after he’d gone inside onto his left foot, the No.11’s shot was blocked.

That was Mane’s final noteworthy involvement, the forward needing to be replaced just after the hour mark. Takumi Minamino came on in his stead for his Premier League debut.

A half-chance for Jimenez, confidently snuffed out by Virgil van Dijk, followed, but an electric burst from Salah nearly resulted in a second for Liverpool in first-half stoppage time.

The Egyptian surged inside off the right flank, beat two defenders and struck for goal, only to see his effort deflect up off an outstretched leg and into the arms of a grateful Patricio.

An action-packed start to the second period involved opportunities for both sides: Patricio tipping Salah’s low drive wide, prior to Joe Gomez blocking Neto’s attempt at the other end.

But Wolves were soon level, Jimenez glancing in Traore’s cross to end the Reds’ run without conceding in the Premier League at 725 minutes.

Liverpool cleared their heads quickly and set about regaining their lead.

Leander Dendoncker had to be at full stretch to divert Alexander-Arnold’s delivery away while Firmino lurked at the back post, and Patricio then gathered the Brazilian’s shot on the rebound when Minamino’s curler was partially cleared by a defender.

However, Wolves – and Traore and Jimenez in particular – remained threatening, and two excellent Alisson Becker saves were required to deny the hosts’ creator and goalscorer in quick succession.

The next chance was Liverpool’s, Salah whipping a shot wide after working himself an angle, before Klopp introduced Fabinho from the bench with 20 minutes remaining, perhaps with an eye on regaining control of a match that had developed into an end-to-end duel.

Patricio then repelled a Firmino strike with his legs after the No.9 had deceived Conor Coady, but the Brazilian would settle a keenly-contested affair a couple of minutes later.

Having benefitted from Salah's mesmerising footwork and Henderson's deft pass, Firmino drifted free and dispatched an unstoppable shot into the top corner.