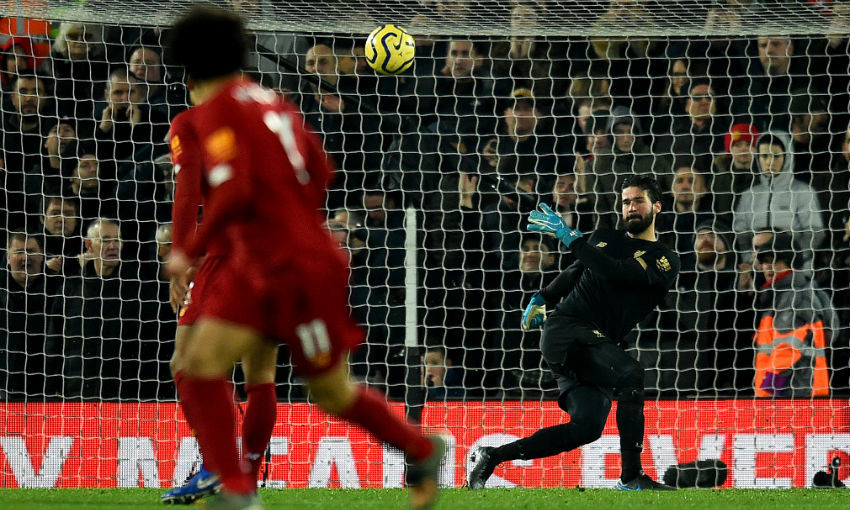 Alisson Becker’s assist for Mohamed Salah’s Kop-end clincher against Manchester United had been in the pipeline for 18 months, Jürgen Klopp has revealed.

Liverpool’s No.1 delivered an exquisite volleyed pass into Salah’s path in stoppage time of last Sunday’s clash at Anfield, with the forward duly racing clear and slotting home to seal a 2-0 victory.

In doing so, Alisson became the first ‘keeper to set up a goal in the Premier League since Pepe Reina did so for Fernando Torres back in March 2010.

And Klopp has explained that the duo have been planning such a moment since Alisson followed Salah’s pathway in July 2018 by joining the Reds from AS Roma.

“This specific situation with Ali - Mo was actually at the 18-yard box around the corner so he was probably the first one on the pitch who saw the guy will be offside and he was then already on his bike,” the boss said.

“When Ali kicked the ball there, Mo was really in the perfect position. They know each other longer than we know them because they played together at Rome and from the first day since they were in, Mo is asking for these balls and Ali wants to play these balls but we don’t have a lot of times the opportunity to do so, especially with that outcome because usually the opponent is in a different protective formation.

“United wanted to score, it was late in the game and I’m not sure if [Daniel] James was there for all the protection in the game. But yeah, it was just a perfect moment for us and really well done.”

The clean sheet recorded versus United was Alisson and Liverpool’s seventh in succession in the Premier League and the 27-year-old has conceded just once in his last 10 appearances.

Since arriving at Anfield, the stopper has won all manner of trophies and individual honours, so has he exceeded Klopp’s expectations?

“As a goalkeeper we knew what we get,” the manager replied.

“OK yes, he made steps, which is normal in his life and with the training he gets with John [Achterberg] and Jack [Robinson]. As a person, yes he has exceeded the expectation because he’s an outstanding guy. We have a lot of really good guys, but he’s a very special person and that’s great, yes.

“From that point of view he did it but apart from that, we knew we would get a really good goalkeeper: his character, how calm he is, helps us a lot. His goalkeeper techniques improve and improve, making the difficult things look easy, but you have to stay like this.

On Alisson’s impressive levels of concentration, Klopp continued: “That’s his personality, he’s like this. He’s a very calm person – a family guy, good friend, stuff like this so he’s not easy to excite I would say.

“But he is in the game and he knows the game for a long [time]. He has had a different career to other careers, I would say. He was not at 18 the No.1 pick for everybody, he had to work. His brother is a goalkeeper as well and I’m sure he helped him a lot. It’s just about knowing the job.

“That's a similar job to do and you need a specific personality for that, and thank God our boys have that.”