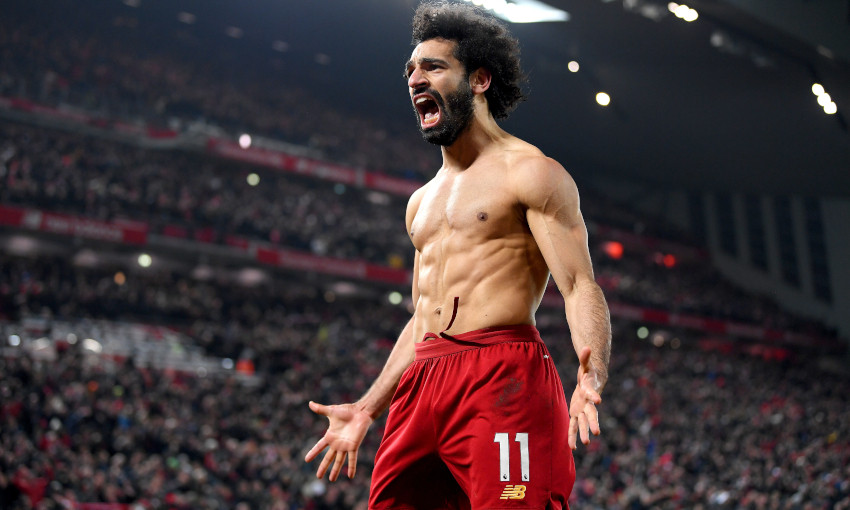 Jordan Henderson and Mohamed Salah insisted Liverpool will not look beyond the next game after increasing their lead of the Premier League to 16 points by beating Manchester United 2-0.

Virgil van Dijk’s early header marked a dominant opening 45 minutes for the Reds at Anfield on Sunday, but the hosts were made to dig in by their rivals during the second half.

Salah sprinted clear from an Alisson Becker assist in stoppage-time and slotted a finish past David de Gea, however, to guarantee a 21st win from 22 league games this season.

“The thought came to my mind that I would not score today but I came back mentally, I prepared myself, to keep calm,” the Egyptian, who had sent a big chance wide earlier in the contest, told Sky Sports.

“But even if I didn’t score today, it doesn’t matter – as long as the team keep winning, I’m fine with that.

“We struggled last season at the same time [of the campaign], so we have to keep calm and just focus on each game.”

The victory over United followed a draw for nearest challengers Manchester City on Saturday and a defeat for third-placed Leicester City earlier on Sunday.

Liverpool therefore hold a commanding 16-point advantage at the summit, with a game in hand still to play at West Ham United later this month.

Henderson, though, was adamant the players cannot allow the situation to influence the way they approach the remainder of the campaign.

“We’re not really thinking about the end. Why should we change now? Why think about the end of the season?” the captain, named Man of the Match, said.

“There are still a lot of games left; we have taken it each game [at a time] for a long time now and it has put us in good stead. So there is no need to change.

“The crowd were unbelievable again today. For us as players, it’s the next game, the next challenge – the Premier League is tough, there are some tough teams. United played well at times today but, overall, I felt we deserved the three points.”

He added: “It is special, we’re enjoying our football but you’ve got to stay hungry, you’ve got to keep learning and keep wanting more. To be fair, this group of players wants to do that.