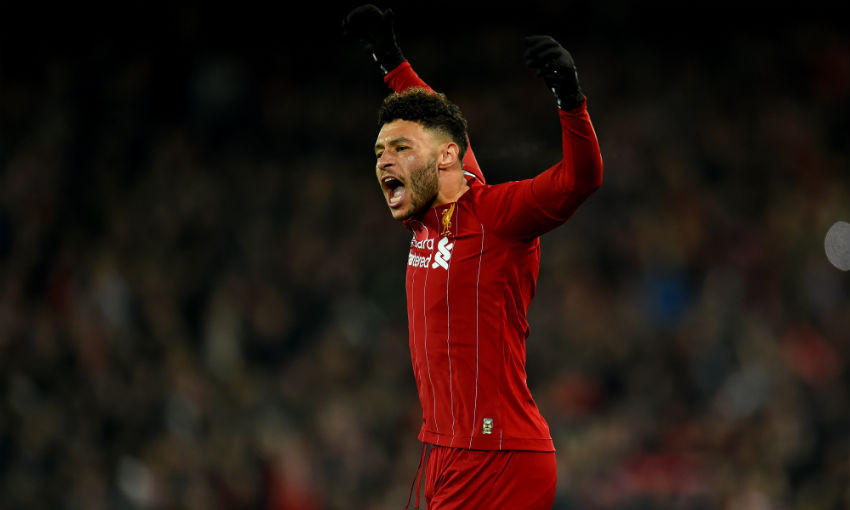 He netted arguably the goal of the Champions League season so far, but nothing beats a Steven Gerrard-esque screamer at the Kop end as far as Alex Oxlade-Chamberlain is concerned.

Liverpool’s No.15 has enjoyed a productive campaign in front of goal this season, scoring five for the Reds in all competitions and one for England, and almost all of those strikes merit the description ‘spectacular’ or involved a high degree of skill.

For many, the standout would appear to be his second in October’s 4-1 win at Genk, an audacious outside-of-the-boot finish that cannoned in off the crossbar.

However, Oxlade-Chamberlain himself regards his long-range drives against Manchester City in the Champions League two seasons ago and Arsenal in the Carabao Cup earlier this term with more fondness.

Every angle of Oxlade-Chamberlain's screamer against Man City

“My second goal in Genk was different,” reflects the 26-year-old in an interview for February’s edition of the official Liverpool FC magazine. “It’s a goal I can appreciate a lot more because of the skill of it.

"The technique that I tried doesn’t come off all the time, but for me the goals I scored against Man City and Arsenal in front of the Kop are my favourites.

“The intensity of smashing one in, in front of the Kop, there’s no better feeling. The feeling I got instantly off the back of the Arsenal goal… for me, that’s what I live for.”

He continues: “I used to watch Stevie Gerrard smash them in, in front of the Kop, and imagine the feeling that would give me. Goals like that give me a buzz like nothing else.

“The Genk goal was a bit like, ‘Ooh, it’s gone in.’ It caught me a bit by surprise that I tried it and it actually went in!

“Afterwards I’ve probably appreciated it a lot more, but when I watch back the Man City goals and the Arsenal goal, I get goose bumps. They’re the ones I enjoy scoring more.”

Alex Oxlade-Chamberlain: We were professional in Porto win