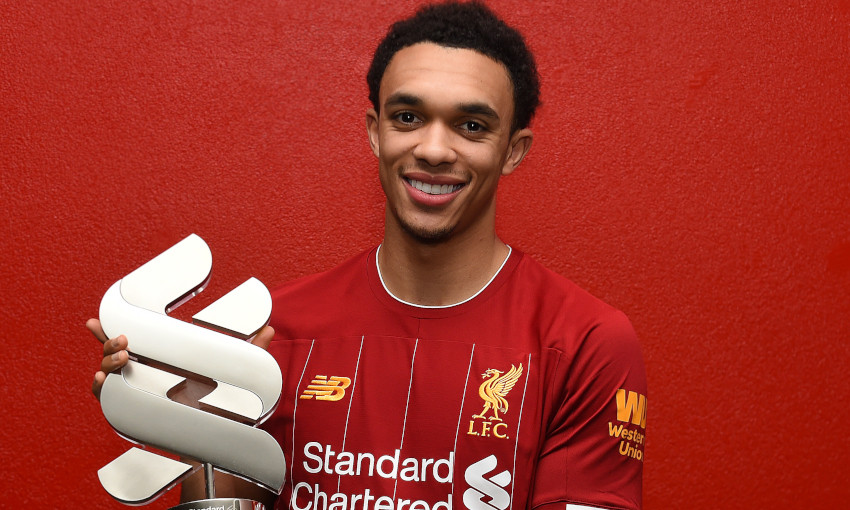 Trent Alexander-Arnold has been named Liverpool’s Standard Chartered Player of the Month for December.

The right-back was a key figure throughout a memorable month in which the Reds strengthened their lead at the top of the Premier League, advanced to the last 16 of the Champions League and won the FIFA Club World Cup.

In eight appearances across all competitions, Alexander-Arnold registered four assists and one goal: the stunning low drive that capped a Man of the Match display in the 4-0 top-flight victory at second-placed Leicester City on Boxing Day.

Two assists, a goal, a clean sheet and the Man of the Match award 💫 The best bits from a SUBLIME @trentaa98 perfor… https://t.co/I61ZdnRWet

The 21-year-old’s outstanding form saw him hold off competition from Roberto Firmino and Mohamed Salah, who finished second and third respectively, to earn the most votes in our Player of the Month fan poll.

Upon being presented with the trophy at Melwood, Alexander-Arnold told Liverpoolfc.com: “It’s a massive award for me coming from the fans, so it means a lot. It was a good month for the club as a whole; we obviously won a trophy and had some good results in the league.

“I’m really proud and hopefully we’ll be able to keep up the good form.”

In winning the Club World Cup, Liverpool lifted their third trophy of 2019, adding to the Champions League and UEFA Super Cup.

And the significance of becoming the first Reds side in history to claim the prize is not lost on Alexander-Arnold.

“Winning the trophy in Qatar, which was a big part of the history of the club as it was something that had never been achieved before, so for us to do that was massive,” the No.66 stated, when asked for his highlight of December.

“The Leicester game was big and the win in the derby was too, especially with winning so convincingly. It was a good month overall.”

Alexander-Arnold added: “Winning trophies can only do one thing for you and that’s giving you a lot of confidence in terms of the ability of the team.

“Being able to go to a different country midway through the season, it could possibly be a disruption of rhythm, so for us to be able to do it – and playing extra-time, which was difficult – and then come back and play the way we did against Leicester was unbelievable.”